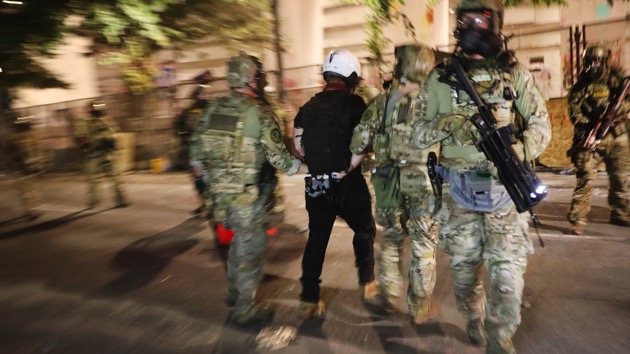 Photo by Spencer Platt/Getty ImagesBy LUKE BARR and ALEXANDER MALLIN, ABC News(PORTLAND, Ore.) — After unrest and public outcry over clashes between protesters and law enforcement, there will be a “phased withdrawal” of federal officers from Portland, the Oregon governor announced Wednesday.”These federal officers have acted as an occupying force, refused accountability, and brought violence and strife to our community. Beginning Thursday, all Customs and Border Protection and ICE officers will leave downtown Portland, and shortly thereafter will begin going home,” Gov. Kate Brown said in a statement, adding that the withdrawal agreement came after “my repeated requests.”Acting Secretary of Homeland Security Chad Wolf said in a statement that a joint plan with the governor “includes a robust presence of Oregon State Police in downtown Portland.””State and local law enforcement will begin securing properties and streets, especially those surrounding federal properties, that have been under nightly attack for the past two months,” Wolf said.The Department of Homeland Security will keep federal law enforcement personnel present in the city “until we are assured that the Hatfield Federal Courthouse and other federal properties will no longer be attacked and that the seat of justice in Portland will remain secure,” according to Wolf.This is a developing story. Please check back for updates.Copyright © 2020, ABC Audio. All rights reserved.