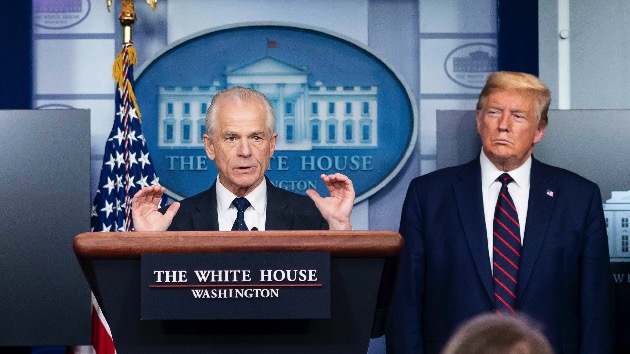 Official White House Photo by D. Myles CullenBy LAUREN LANTRY and SHANNON K. CRAWFORD, ABC News(WASHINGTON) — On Wednesday morning, presidential trade adviser Peter Navarro refused to answer what President Donald Trump meant when he said the United States is “getting towards corona-free” but touted hydroxychloroquine as a treatment for coronavirus even though the FDA has determined that it is “unlikely to be effective.””So, can you explain what the president meant by saying, ‘we’re getting towards corona-free’?” asked ABC News’ Chief Anchor George Stephanopoulos on ABC’s Good Morning America Wednesday. Trump’s statements came as more than 1,500 Americans died and more than 61,000 more became infected with coronavirus in less than 24 hours.”Not my lane, George,” Navarro responded, saying he was there to discuss how America is going to get a vaccine and that it’s his job to help the president save lives and create jobs.But before the interview was over, Navarro said, “I’m sitting on 63 million doses of hydroxychloroquine at the FEMA stockpile and that would save — that’s enough for 4 million Americans.””As you know, it’s the FDA that has revoked the emergency use of hydroxychloroquine,” Stephanopoulos responded, pushing back on Navarro’s false claims that hydroxychloroquine could save Americans.In June, after finding that hydroxychloroquine “was very unlikely to be beneficial to hospitalized patients with COVID-19,” the National Institute of Health abandoned clinical trials of the drug.And in July, the FDA warned that hydroxychloroquine can cause “heart rhythm problems and other safety issues, including blood and lymph system disorders, kidney injuries, and liver problems and failure.” On July 1, the FDA made an announcement revoking hydroxychloroquine’s emergency use authorization (EUA).Navarro, who is not a medical professional, appeared to point to a study he has previously publicly praised out of the Henry Ford Health System. The study was a retrospective analysis of 2,541 patients hospitalized between March 10 and May 2, 2020 that found 13% of those treated with hydroxychloroquine alone died compared to 26.4% not treated with hydroxychloroquine.But researchers are skeptical of the Henry Ford Health System’s results and methods. And after several studies, the FDA and NIH both found that the drug is not beneficial to hospitalized patients.Just this week, ABC News interviewed both FDA Commissioner Dr. Stephen Hahn and Dr. Anthony Fauci, the nation’s top infectious disease expert. Both agreed with the FDA’s assessment that hydroxychloroquine is unlikely to benefit patients hospitalized due to COVID-19.In an interview with ABC News as part of its sweeping 20/20 investigation American Catastrophe: How Did We Get Here?, Hahn acknowledged that “hydroxychloroquine has become politicized.””And it’s a shame because … public health emergencies shouldn’t be about politics,” Hahn cointinued.But Hahn defended his agency’s decision to initially grant an EUA for hydroxychloroquine, noting that the government’s move to do so was based “upon the available data at the time.”But as additional information and data emerged, his agency revoked its EUA.Fauci has also pushed back on the use of hydroxychloroquine.”The overwhelming, prevailing clinical trials that have looked at the efficacy of hydroxychloroquine have indicated that it is not effective in coronavirus disease,” Fauci said on Tuesday on “Good Morning America.”But Navarro, appearing on the show just a day after Fauci, claimed he didn’t know Fauci’s opinion on the subject.”I don’t know what Dr. Fauci’s views are on hydroxychloroquine, but,” Navarro said.”He said it’s been shown that it’s not effective and can have side effects” Stephanopoulos responded.Earlier this month, Navarro publicly tried to discredit Fauci in an op-ed. Navarro wrote that he only listens to Fauci with “skepticism and caution,” adding that Fauci has been “wrong about everything.”The White House distanced itself from Navarro’s claims but did not disavow them.”Well, he made a statement representing himself,” Trump said of Navarro’s op-ed. “He shouldn’t be doing that.”During the segment, Navarro also said that yesterday will go down in the history books as “a great day for America,” referring to the announcement of a $765 million agreement to turn Kodak into a pharmaceutical company to produce ingredients for generic drugs.Navarro also said it was important to tell the American people how quickly the vaccine was being developed.”We may have a vaccine by the end of the year,” Navarro said.”That is certainly the hope,” Stephanopoulos responded.Copyright © 2020, ABC Audio. All rights reserved.