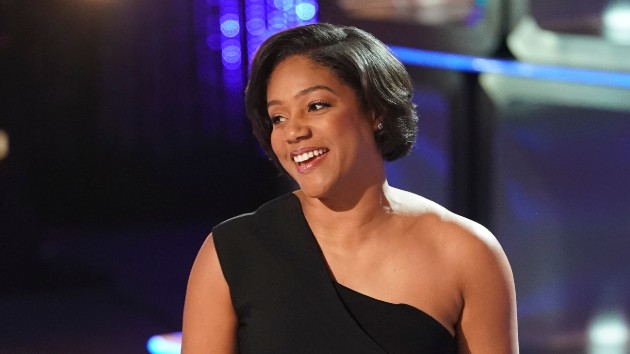 ABC/Eric McCandless(LOS ANGELES) — Tiffany Haddish tearfully revealed on Monday the reason why she doesn’t have any children, and it’s due to her fears about racism.

The Like a Boss star spoke about her decision when talking with Carmelo Anthony on his podcast What’s in Your Glass.

When remarking how she, a woman in her 40s, is frequently dodging questions about when she’ll have a baby, Haddish became emotional.

“There’s a part of me that would like to do that, and I always make up these excuses like, ‘Oh, I need a million dollars in the bank before I do that, I need this, I need that.’ But really, it’s like, I would hate to give birth to someone that looks like me and then knowing that they’re gonna be hunted or killed,” She tearfully explained, revealing she watched her friends “be slaughtered by the police” when she was 13 and 14-years-old.

She adds that’s why she has a deep understanding of what George Floyd’s family is going through because she, too, felt powerless to save her friends that were in police custody.

That’s why she’s calling for change.

“White people don’t have to think about that,” Haddish explained. “It’s time to talk about that, and how we have to come together as a community and work as a unit.  Maybe we don’t all agree on the same things, but we need to find some common ground.”

The Emmy winner also noted that such conversations won’t be easy, but they need to happen in order to “move forward as human beings.”

“We have to figure out how to change people’s hearts,” She passionately declared. “That’s what I’ve been trying to do my whole career.  Not necessarily change their hearts but inspire their hearts to laugh” because “everyone wants to be happy.”