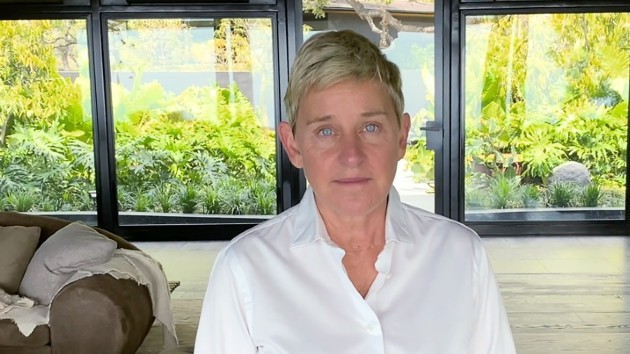 Photo by FOX via Getty Images(LOS ANGELES) — While WarnerMedia completes an investigation into the accusations, Ellen DeGeneres wrote a letter to her staff regarding abuse allegations some of her self-titled show’s staff vented to Buzzfeed earlier this month.

The Hollywood Reporter obtained the letter, in which DeGeneres apologizes to her staff.

While several high-ranking producers on the show were named in the complaints, Ellen herself was not. That doesn’t absolve her, she seems to say, since the show bears her name.

“As we’ve grown exponentially, I’ve not been able to stay on top of everything and relied on others to do their jobs as they knew I’d want them done,” she wrote. “Clearly some didn’t. That will now change and I’m committed to ensuring this does not happen again.”

The industry trade notes that heads will likely roll from the accusations of racial comments, bullying, and other elements that led to a toxic work environment for some. Executive producer Ed Glavin is one named by a source at the show, who noted, “Once he’s out, it will be like a new day.”

Glavin and fellow executive producers Mary Connelly and Andy Lassner, had apologized after the Buzzfeed piece broke, noting in part, “We are truly heartbroken and sorry to learn that even one person in our production family has had a negative experience. It’s not who we are and not who we strive to be, and not the mission Ellen has set for us.”

For her part, DeGeneres’ apology letter to her crew said, “As someone who was judged and nearly lost everything for just being who I am, I truly understand and have deep compassion for those being looked at differently, or treated unfairly, not equal, or – worse – disregarded.”