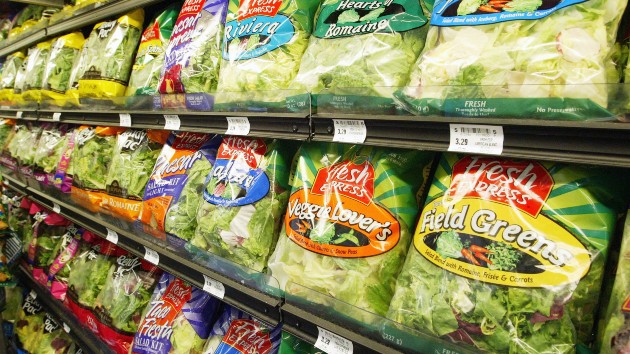 Justin Sullivan/Getty ImagesBy KELLY MCCARTHY, ABC News(NEW YORK) — A lawsuit has been filed against a bagged salad brand after the Food and Drug Administration and Centers for Disease Control and Prevention linked its product to hundreds of parasite infections in the United States, leading to the product being recalled in June.Tainted salad mix from Fresh Express, which was sold at ALDI, Hy-Vee, Walmart and Jewel-Osco stores, caused an outbreak of cyclospora across the Midwest, according to an investigation by the FDA and CDC. “Six-hundred and forty-one people with laboratory-confirmed Cyclospora infections and who reported eating bagged salad mix before getting sick have been reported from 11 states — Georgia, Illinois, Iowa, Kansas, Minnesota, Missouri, Nebraska, North Dakota, Pennsylvania, South Dakota and Wisconsin,” the CDC announced in a press release on July 24.The parasite, which can be ingested via contaminated food, can cause an intestinal infection known as cyclosporiasis, according to the FDA. Symptoms of cyclosporiasis may include diarrhea, loss of appetite, weight loss and cramping, among others, the FDA says.Thirty-seven people were hospitalized with the illness between May 11 and July 5, the FDA and CDC reported.Illinois is the epicenter of the outbreak, with 198 confirmed cases.The FDA has asked all consumers who have symptoms of cyclosporiasis to contact a health care provider to report the symptoms and receive treatment.On Tuesday, the food safety law firm of Ron Simon & Associates and Chicago attorneys Meyers & Flowers filed a lawsuit against Fresh Express that stemmed from the contaminated products, according to a press release.The lawsuit was filed against Fresh Express and Berkot’s Super Foods in Cook County, Illinois, on behalf of John Silbersdorf.The June 27 product recall included products containing iceberg lettuce, red cabbage and carrots produced at the company’s Streamwood, Illinois, facility.Recalled products can be identified by the product code in the upper right-hand corner of the front of the package, which will start with the letter “Z” and be followed by the number “178” or lower.For a full list of the recalled product information from the FDA, click here.Copyright © 2020, ABC Audio. All rights reserved.