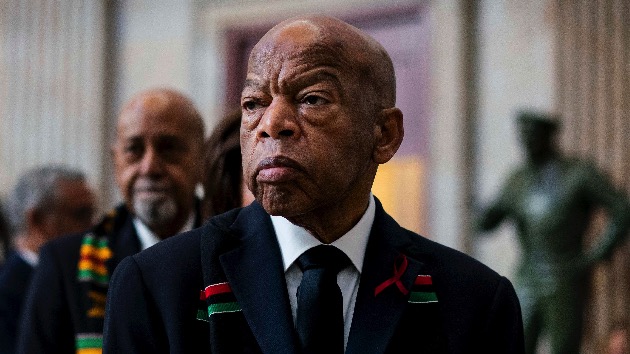 Melina Mara/The Washington Post via Getty ImagesBy LIBBY CATHEY and ELLA TORRES, ABC News(ATLANTA) — The funeral service for Rep. John Lewis, a civil rights icon known as the “conscience of the U.S. Congress,” began at 11 a.m. Thursday, wrapping up six days of memorials paying tribute to his life and his legacy.Lewis, the son of Alabama sharecroppers, played an instrumental role in the passage of the landmark Voting Rights Act in 1965 and went on to serve more than three decades in Congress representing the 5th Congressional District of Georgia.Former President Barack Obama will eulogize Lewis, while George W. Bush and Bill Clinton will also attend the private funeral at the historic Ebenezer Baptist Church, which the Rev. Martin Luther King Jr. once led. Lewis will be buried in South View Cemetery in Atlanta on Thursday afternoon.Lewis died on July 17 at 80 after a months-long battle with pancreatic cancer.In some of his final words, Lewis wrote about the current climate of America and the need to keep fighting for justice in an op-ed for The New York Times, which was to be published on the day of his funeral.”Though I may not be here with you, I urge you to answer the highest calling of your heart and stand up for what you truly believe,” Lewis wrote. “In my life I have done all I can to demonstrate that the way of peace, the way of love and nonviolence is the more excellent way. Now it is your turn to let freedom ring.”

Here is how the service is developing today. All times Eastern. Check back for updates.

1:39 p.m.: Let’s not give up,’ Lewis’ niece urgesSheila Lewis O’Brien remembered Rep. John Lewis not only as a revered civil rights icon and congressman, but as a family man.Calling him “Uncle Robert,” she said she wanted to pay tribute “to a man who was larger than life.””For the last 60 years as a nonviolent civil rights activist, he was a voice for those who couldn’t speak, the feet for those who couldn’t walk and the champion of injustice for those that couldn’t fight,” O’Brien said.She said it was clear why Lewis’ life had been so celebrated in the past few days and urged Americans to continue her uncles’ fight.”Let’s continue this celebration of life by taking up the baton he has now laid down and endeavored to get into trouble, good trouble, necessary trouble. Let’s not give up.”

1:29 p.m.: Lewis remembered as a boss by deputy chief of staffRep. John Lewis broke down barriers in the workplace and created a family among his employees, his deputy chief of staff said.”We were a little family, a little enclave,” Jamila Thompson said. “A lot of drama, a lot of fun and so much love.”Thompson said Lewis made each staff member feel “special” and “worthy” while working for him.”He allowed us to be our true and authentic selves, just the very best version,” she said.Thompson, like others, also encouraged the American people to vote in November to honor Lewis.”Be the best version of yourself. Be informed. Stay engaged. Even though the work is hard,” Thompson concluded. “If you are of age and eligible, for the love of God, please vote.”12:59 p.m.: Xernona Clayton recalls Lewis’ love story, urges kindnessXernona Clayton, the founder of the Trumpet Foundation, spoke of the love story between Rep. John Lewis and his late wife Lillian Miles Lewis.Clayton said she had set the two up. Though both were initially hesitant, Clayton said when they finally had the chance to spend time together, their bond was clear.”Lillian and John stayed married. I put it together, but it lasted 43 years,” she said warmly. “That’s not a bad record, is it?”Clayton also spoke of their son, John Miles Lewis, who is her godson, saying through their love, the couple showed him love.Clayton also urged those who want to honor Lewis, not just to listen to his praises but to “do something about the man he asked us to be in ourselves, and that is to be kind to everybody, to love everybody.”She ended her speech with a clear message: “I want to advise you and admonish you, to really give meaning to the John we love: Vote.”Bill Campbell, the former mayor of Atlanta, similarly encouraged Americans to vote in November to truly honor Lewis.12:40 p.m.: ‘Black lives matter,’ Rev. James Lawson says in powerful speechRev. James Lawson Jr., a mentor for Rep. John Lewis and nonviolent activist, said the only way to honor the late congressman’s life is to ensure equality.”We need the Congress and president to work unfalteringly on behalf of every boy and every girl, so that every baby born on these shores will have access to the tree of life,” Lawson, 91, said. “That’s the only way to honor John Robert Lewis. No other way.”Lawson also had a simple message for the congregation: “Black lives matter.”He said that while Lewis was shaped by his early preachings as a boy, he was also shaped by “the malignancy of racism in Troy, Alabama,” where Lewis was born.”There formed in him a sensibility that he had to do something about it,” Lawson said.Lawson said he, like Lewis and others, such as civil rights pioneer C.T. Vivian, who also recently died, had a similar experience.”I maintain many of us had no choice to do, but we tried to do, primarily because at an early age we recognized the wrong under which we were forced to live,” he said, “and we swore to God that by God’s grace we would do whatever God called us to do in order to put on the table of the nation’s agenda this must end.”

12:27 p.m.: Crowd gathers outside churchA crowd of about 100 people gathered outside the church where Rep. John Lewis’ funeral was underway.Because of the coronavirus pandemic, only about 240 people were allowed in the Ebenezer Baptist Church.12:18 p.m.: Pelosi says Lewis’ mission was ”nonviolently insisting on the truth’House Speaker Nancy Pelosi spoke of her friend and colleague Rep. John Lewis, honoring his life and remembering his legacy.”When John Lewis served with us, he wanted us to see the civil rights service and the rest through his eyes,” Pelosi said, noting he took members of the House to Selma for two decades. “He wanted us to see how important it was, how important it was to understand the spirit of nonviolence.”Pelosi also spoke about Lewis’ legacy and mission, invoking the Sanskrit word “satyagraha.””It means nonviolence, and it means insistence on the truth. And that is what John Lewis was all about: nonviolently insisting on the truth,” Pelosi said.Through tears, she told fellow mourners that he always worked toward a “more perfect union,” with many messages specifically to young people.Pelosi ended her speech with an image of a double rainbow, saying that on his last night at the Capitol, one appeared, despite it not having rained.”He was telling us, ‘I’m home in heaven,"” Pelosi said. “We always knew he worked on the side of the angels, and now he is with them.”

12:03 p.m.: Clinton calls for all to ‘salute, suit up and march on’Former President Bill Clinton said Rep. John Lewis left the world with “marching orders” to “keep moving,” referencing his op-ed in the New York Times, which was published on the day of his funeral.”I just loved him. I always will, and I’m so grateful that he stayed true to form: He’s gone off yonder and left us with marching orders,” Clinton said. “I suggest — since he’s close enough to God to keep his eyes on the sparrow and us — we salute, suit up, and march on.”Clinton also recalled Lewis’ ability to make “good trouble,” as well as his “uncanny ability to heal troubled waters.”The former president also spoke about Lewis’ insistence for nonviolence, saying Lewis would rather keep moving in the right direction “without hatred in his heart” and with open hands rather than “clenched fists.”

11:46 a.m.: Bush delivers remarksFormer President George W. Bush said that while he and Rep. John Lewis had their differences, “we live in a better, more noble country because of John Lewis.” Bush said that Lewis’ lifelong work does not end with his death and the fight is not over.”The story that began in Troy [where Lewis was born] isn’t ending here today, nor is his work,” Bush said. “He will live forever in the hearts of Americans who act justly, love mercy and walk humbly with their God.”

11:28 a.m.: Rev. Dr. Bernice King invokes words of MLK, says Lewis’ fight for justice will continueRev. Dr. Bernice King, the youngest child of civil rights icon Dr. Martin Luther King Jr., honored the life of Lewis with her father’s words.”Death is not a period that ends this great sentence of life, but a comma which punctuates it to a lofty and higher significance,” King said, quoting her father.King thanked God for “honoring us with his presence and allowing our lives to intersect with his.” She also invoked the words of Lewis, saying that those fighting for justice would continue to make “good trouble as long as [God] grants us the breath to do so.”She prayed for “good trouble” to dismantle white supremacy, protect Black bodies and ensure Black lives have equitable representation and power in every arena, and until “this nation truly becomes a compassionate nation.”

Funeral services have begun for Rep. John Lewis. Rev. Dr. Raphael G. Warnock, the senior pastor at Ebenezer Baptist Church, started with the welcoming remarks, remembering Lewis for his lifelong fight as a civil rights icon and saying he is an emblem of a true hero.”When there is so much political cynicism and narcissism that masquerades as patriotism, here lies a true American patriot who risked his life for the hope and promise of democracy,” Warnock said.Warnock added that although the news cycle happens at a “dizzying pace” between the pandemic and protests for racial justice, “time stood still. The nation takes it time to remember him.””He became a living, walking sermon about truth-telling and justice-making, and he loved America until America learned how to love him back,” he said.

9:38 a.m.: Speakers include Obama, Bush, Clinton, Bernice King, PelosiTributes for Rep. John Lewis will be delivered by former Presidents George W. Bush and Bill Clinton, as well as Speaker of the House Nancy Pelosi, according to a copy of the funeral program.Obama, as reported Wednesday, will deliver the eulogy.Rev. Dr. Bernice King, the CEO of the King Center and youngest child of civil rights leaders Dr. Martin Luther King Jr. and Coretta Scott King, will lead the funeral in a prayer, the funeral program showed.Other speakers paying tribute include Bill Campbell, former mayor of Atlanta; Jamila Thompson, deputy chief of staff for Lewis; Xernona Clayton, founder of the Trumpet Foundation; and James M. Lawson, an activist.Funeral ceremonies began last Saturday in Lewis’ hometown of Troy, Alabama. On Sunday in Selma, 55 years after he and other demonstrators were beaten on “Bloody Sunday,” Lewis crossed the Edmund Pettus Bridge for a final time. Where he was once met with batons, Lewis’ casket saw salutes from state troopers.