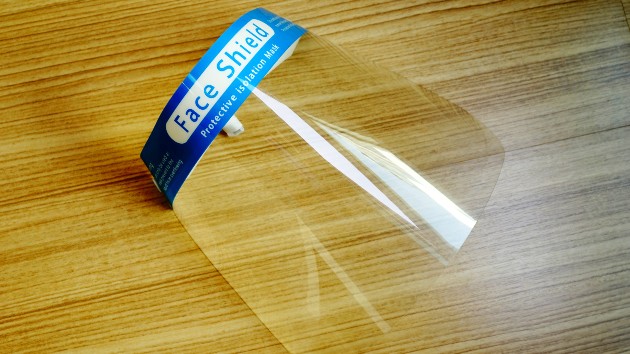 Supersmario/iStockBy OLIVIA RUBIN, ABC News(NEW YORK) — A number of the nation’s top public health officials have said in recent days that Americans searching for extra layers of protection against the novel coronavirus while out in public may want to try face shields — clear pieces of plastic that cover the face and can further prevent respiratory droplets from spreading when worn over a mask.”If you have goggles or an eye shield, you should use it,” Dr. Anthony Fauci, the nation’s top infectious disease specialist, told ABC News’ Chief Medical Correspondent Dr. Jen Ashton on Wednesday.

Dr. Deborah Birx, the White House task force coordinator, made similar statements about the benefits of face shields on Fox News on Thursday. Fauci and other experts stress, though, that face shields are just that: an added layer of potential protection to be in addition to masks, not an alternative.”We can’t view them as direct replacements of masks,” said ABC News contributor John Brownstein, an epidemiologist and the chief innovation officer for the Boston Children’s Hospital. “High quality masks should still be considered the gold standard.”This week an outbreak in a Swiss hotel affected staffers wearing only face shields, according to a report, and the Swiss government has since warned against relying on them alone.

“It has been shown that only those employees who had plastic visors were infected,” said Rudolf Leuthold, a Swiss health official, according to the report. “There was not a single infection among employees with a mask.”Still, some communities are turning to shields, despite the evidence that they are not sufficient.Josh Hildebrand, an Ohio resident who pivoted his tech company to start 3D printing face shields for front-line workers when he heard about personal protective equipment shortages in March, told ABC News he has begun to receive orders from all parts of the community: school districts, retail business and individuals. Many of these orders are for people who want an added layer of protection, Hildebrand said, but he is also noticing a willingness from people have resisted masks.”We are seeing that people who otherwise wouldn’t wear a mask say, ‘You know what, I’ll try one of those,” Hildebrand said.”We found that we’ve been able to win some of those folks over [with face shields],” Hildebrand continued. “If we can get some of the population who are not willing to wear masks, it’s a huge improvement.”The Centers for Disease Control and Prevention does not recommend face shields for the general public, citing uncertainty in their effectiveness.

“It is not known if face shields provide any benefit as source control to protect others from the spray of respiratory particles,” the agency warns on its website.Shields are recommended for health care workers because they can help prevent the virus from being contracted through the eye. The American Health Care Association/National Center for Assisted Living also told ABC News shields can be helpful because “they can help protect individuals from touching their own face and spreading the virus in that way.”Brownstein agreed that “wearing a face shield is clearly better than no protection at all.””If a less cumbersome alternative means someone will actually comply with guidelines, then we have to at least consider it,” he said.Some schools districts in Ohio and Florida are allowing either masks or face shields on school grounds to satisfy face covering requirements, in some instances as a last-ditch effort to provide a barrier for those they fear won’t comply with mask mandates. At least four school districts in Ohio have ordered face shields for students and teachers as an alternative to face masks, according to a report by The Daily Record.Steve Dickerson, superintendent of the Hillsdale School District in Ohio, told ABC News that while it has ordered and will require masks when school resumes in the fall, they have also ordered face shields as a last ditch effort to ensure safety.”It is not the most effective, but we know we are going to have difficulty with students wearing masks,” Dickerson told ABC News.Dickerson said he is planning for his “toughest” scenario: all 800 students in the district back in small classrooms in older buildings with no air conditioning.”We’re gonna highly recommend the mask, but there will be those that will come up with medical reasons, and we deemed the face shields as a better alternative to nothing,” he continued. “No matter what the rules are — there are going to be those that try not to play the rules. And we’re hoping that if nothing else, this will suffice for our safety.”A spokesperson for Ohio Gov. Mike DeWine, who enacted a statewide mask mandate earlier this month after new cases continued to rise, did not respond to ABC News’ request for comment. It is not clear if the shields violate the governor’s order.The Manatee School District in Florida, where no statewide mask mandate has been enacted, has also said that either shields or masks will be sufficient to fill its face-covering policy.Michael Barber, a spokesperson for the school district, declined a request for an interview when reached by ABC News but said that “cloth face masks are our primary means of protection and will distributed to every student and school district employee,” and that they were “still clarifying” the situations in which shields would be used instead of masks. Copyright © 2020, ABC Audio. All rights reserved.

Low levels of testing may be hiding a COVID wave in Texas: Experts

Process begins to get vaccines to kids under 5, the last remaining group