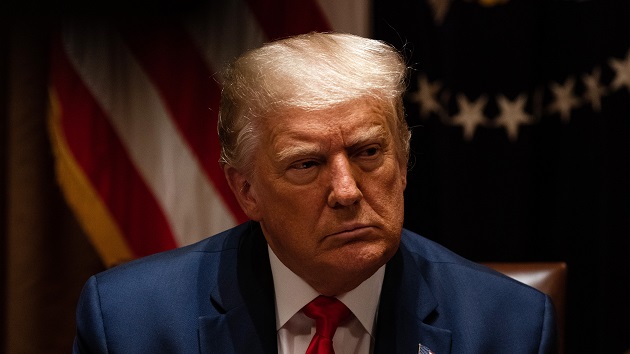 Anna Moneymaker/Pool/Getty ImagesBy BENJAMIN SIEGEL, ABC News(WASHINGTON) — The Trump administration mismanaged ventilator negotiations with a major medical device manufacturer, overpaying by roughly $500 million for tens of thousands of breathing machines earlier this year, House Democrats said Friday in a new report.Citing thousands of pages of emails and documents obtained by the House Oversight Committee, the report concluded that “inept contract management” and negotiating led the Trump administration to mismanage funds in the arrangement with Dutch company Philips – a nearly $650 million contract announced by the Department of Health and Human Services in April — that could have been used to secure protective equipment for front line medical workers early in the coronavirus pandemic.While President Donald Trump and his administration have since touted the production of ventilators, the delays early in the process backed up the delivery of machines that were in short supply last spring and in high demand in states first hit by the pandemic.”This should be something that everyone is very concerned about,” Rep. Raja Krishnamoorthi, D-Ill., told ABC News. “We’re very concerned that the same incompetence and gross negligence that characterize the contract negotiations here are happening elsewhere.”The White House and Republicans, in similar responses to Democrats’ report, accused the committee of trying to politicize the pandemic, and did not address the specific concerns about the agreement negotiated by the administration.”This partisan report is nothing more than a stunt that is only meant to politicize the coronavirus,” White House spokesman Judd Deere said in an email.”We needed ventilators and we needed them quickly. Thanks to President Trump, no person who needed a ventilator went without one. The strength of our SNS continues to grow each day,” Reps. James Comer, R-Ky., and Michael Cloud, R-Texas, said of the report.The Obama administration first inked a contract with Philips in 2014 for 10,000 ventilators by June of 2019 and granted the company a five-month extension when it fell behind in production, teeing up the final delivery of the last batch of ventilators by November 2019.The Trump administration granted Philips three additional extensions to complete the contract, which ended up ended up pushing back deliveries of ventilators to the federal government, a move that “deprived the country of any ventilators from Philips before the pandemic hit,” Democrats wrote.On Jan. 21, when the Centers for Disease Control and Prevention disclosed the first coronavirus death in the United States, Philips emailed the Department of Health and Human Services and offered to move up the delivery of ventilators — a message the administration ignored for six weeks, according to emails cited by Democrats.In March, the administration agreed to modify the terms of its arrangement with Philips to order more ventilators, but did not require the expedited delivery of the machines to the federal government, according to the report, citing emails between the Trump administration and Philips.Instead, top administration officials, including White House senior adviser Jared Kushner, trade adviser Peter Navarro and U.S. International Development Finance Corporation CEO Adam Boehler, a Kushner associate, inked the new deal for ventilators, paying nearly five times the price for machines that were “functionally identical” to the units sold to the Obama administration, Democrats said in the report.In a statement, Philips disputed Democrats’ charges and denied overcharging the Trump administration for ventilators and profiteering in the arrangement.”Philips is on track with the production and delivery of the 43,000 EV300 hospital ventilators according to the April 2020 contract with HHS. The list price of the specific bundle of the EV300 ventilator plus roll-stand and accessories, as selected by HHS, is over $21,000 and is being provided to the U.S. government for $15,000,” the company said. “The agreed price [per unit] reflects a discount, while taking into account part of the higher costs for the expedited delivery schedule.”Krishnamoorthi, whose panel has also investigated the accuracy of coronavirus antibody tests, said Democrats are worried the administration will take a similar approach to its agreements with pharmaceutical companies developing vaccines for the virus and has called for the administration to operate a “transparent” development process.While ventilators were in short supply and high demand earlier this year, many doctors have tried to lessen patients’ dependence on the machines, armed with new knowledge of treatments and alternative therapies that don’t involve intubation.”People were put on mechanical ventilation because they needed help breathing [and] doctors found it very difficult to get those patients off of the ventilators or to wean them off. And the fatality rates of people who had been put on mechanical ventilation with quite high,” Dr. Ronald Waldman, a global health expert at George Washington University, told ABC News.Copyright © 2020, ABC Audio. All rights reserved.

6 in 10 Americans say Trump should be charged for Jan. 6 riot: POLL