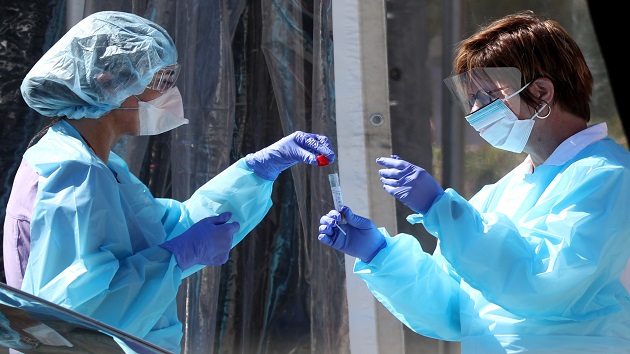 (NEW YORK) — A pandemic of the novel coronavirus has now killed more than 679,000 people worldwide.Over 17.6 million people across the globe have been diagnosed with COVID-19, the disease caused by the new respiratory virus, according to data compiled by the Center for Systems Science and Engineering at Johns Hopkins University. The actual numbers are believed to be much higher due to testing shortages, many unreported cases and suspicions that some national governments are hiding or downplaying the scope of their outbreaks.Since the first cases were detected in China in December, the United States has become the worst-affected country, with more than 4.5 million diagnosed cases and at least 153,314 deaths.Here is how the news is developing today. All times Eastern.1:20 p.m.: House Democrat tests positive after contact with GohmertRep. Raul Grijalva, D-Ariz., the chairman of the House Natural Resources Committee, has tested positive for COVID-19.Grijalva’s diagnosis comes days after he had close contact with Rep. Louie Gohmert, R-Texas, at a committee hearing. Gohmert, who refused to wear a mask, tested positive earlier this week.Grijalva said he’s asymptomatic and will self-isolate.”While I cannot blame anyone directly for this, this week has shown that there are some Members of Congress who fail to take this crisis seriously,” he said in a statement. “Numerous Republican members routinely strut around the Capitol without a mask to selfishly make a political statement at the expense of their colleagues, staff, and their families.”In addition to Grijalva, three House Republicans and several GOP staffers also are self-quarantining after contact with Gohmert.1:06 p.m.: Milwaukee Brewers player opts out for rest of season

Lorenzo Cain, an outfielder for the Milwaukee Brewers, has chosen not to play for the remainder of the season.”We fully support Lorenzo’s decision, and we will miss his talents on the field and leadership in the clubhouse,” President and General Manager David Stearns said in a statement.The news comes a day after the Brewers’ game against the St. Louis Cardinals was postponed.11:25 a.m.: Mississippi school district announces positive COVID test in 1st week backA person in the Corinth School District in Mississippi has tested positive for coronavirus, the school district announced.It was the district’s first week back, and the first district in the state to reopen.The district said anyone who had close contact with the person, which was described as within 6 feet for 15 minutes or more, has been notified.Children who need to quarantine will not be allowed to attend school or school activities, but will be required to complete their work.10:57 a.m.: Florida deaths surpass 7,000

Deaths in Florida have reached 7,145, after an increase of 179 in the last 24 hours, according to the state’s Department of Health.The number of confirmed cases totaled 480,028, an increase of 9,642.Hospitalizations also rose, by 439 in the last 24 hours.However, there were 7,968 active hospitalizations, which is down significantly from the last two weeks.8:54 a.m.: Ohio State releases pledge students must sign to return to campus

The Ohio State University has released a pledge that all students who want to return to campus must sign as part of their effort to minimize the spread.The pledge — called the Together as Buckeyes Pledge — mandates that students follow the university’s guidelines on social distancing, masks and hygiene tips.It also reads, “I understand that COVID-19 is a highly contagious virus and it is possible to develop and contract the COVID-19 disease even if I follow all of the safety recommendations of the university and comply with the Pledge.”Students cannot return to campus without having signed the pledge.For those who don’t sign, they “would be failing to comply with a legitimate university directive and pursuant to university policies, students, faculty, and staff will be subject to the appropriate accountability measures and disciplinary actions,” the pledge reads.Students will be contacted by the student conduct office and given five days to sign the pledge if they have not done so by the time school begins, according to The Columbus Dispatch. If a student still does not sign the pledge, he or she will only be permitted to take virtual courses, may not schedule a move-in time, may not physically enter any campus or university facility and may not physically participate in any university activity on or off campus, the Dispatch reported.8:30 a.m.: California becomes 1st state to tally over half a million cases

California has become the first U.S. state to tally more than half a million diagnosed cases of COVID-19, according to data compiled by Johns Hopkins University.As of Saturday morning, the Golden State had reported at least 500,556 confirmed cases.Just last month, California surpassed New York as the state with the nation’s highest case count.7:25 a.m.: CDC predicts 168,000 to 182,000 US deaths by Aug. 22

The U.S. Centers for Disease Control and Prevention updated its website overnight to include the prediction that 168,000 to 182,000 Americans likely would die from COVID-19-related deaths by Aug. 22.According to the CDC, based on data from 32 modeling groups, weekly reports of new COVID-19 deaths may increase over the next month, with 5,000 to 11,000 new deaths reported during the week ending Aug. 22.The CDC’s forecast also predicts that the number of reported new deaths per week may increase over the next four weeks in Alabama, Kentucky, New Jersey, Puerto Rico, Tennessee and Washington.6:25 a.m.: India records its highest daily increase in cases

India reported more than 57,000 new cases of COVID-19 in the past 24 hours, its steepest spike to date, taking the nationwide count close to 1.7 million.The Indian Ministry of Health and Family Welfare also reported 764 additional coronavirus-related deaths, bringing the total to 36,511.The country of 1.3 billion people has the third-highest number of diagnosed COVID-19 cases in the world, according to a count kept by Johns Hopkins University. As of Saturday morning, India had a total of 1,695,988 diagnosed cases, of which more than 565,000 are active cases.Over 1 million patients there have recovered so far, according to the latest data from the health ministry.5:31 a.m.: Northeastern University to require all students be tested 3 timesNortheastern University announced Friday that it will require all students arriving at the Boston campus for the fall semester to be tested three times for COVID-19 and then immediately self-quarantine.Students also must be tested two more times, on the third and fifth day after the first test. Those whose initial test comes back negative will be allowed to discontinue their quarantine. After the third test comes back negative, students will be allowed to fully participate in campus activities, such as going to classes, according to Northeastern University.The new measures will apply to every student arriving on campus from all states for the start of the fall semester, whether they live on or off campus.Students living on campus who test positive for the novel coronavirus will be isolated and moved into designated on-campus housing units with their own bathrooms. Food will be delivered to the students there, and case managers and clinical support will be made available on a daily basis, according to the university.4:07 a.m.: US reports over 67,000 new cases as total tops 4.5 millionJust over 67,000 new cases of COVID-19 were identified in the United States on Friday, bringing the nationwide count soaring past 4.5 million, according to a count kept by Johns Hopkins University.The latest daily caseload is under the country’s record set on July 16, when more than 77,000 new cases were identified in a 24-hour reporting period.A total of 4,562,171 people in the United States have been diagnosed with COVID-19 since the pandemic began, and at least 153,314 of them have died, according to Johns Hopkins. The cases include people from all 50 U.S. states, Washington, D.C., and other U.S. territories as well as repatriated citizens.By May 20, all U.S. states had begun lifting stay-at-home orders and other restrictions put in place to curb the spread of the novel coronavirus. The day-to-day increase in the country’s cases then hovered around 20,000 for a couple of weeks before shooting back up and crossing 70,000 for the first time in mid-July.Many states have seen a rise in infections in recent weeks, with some — including Arizona, California and Florida — reporting daily records.Copyright © 2020, ABC Audio. All rights reserved.