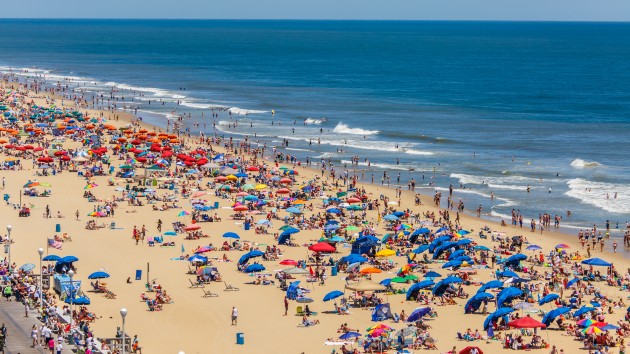 rypson/iStockBy IVAN PEREIRA, ABC News(NEW YORK) — Despite rising coronavirus cases across the nation, many people have been packing into some of their favorite hotspots over the summer, flouting social distancing guidance and rules as well as mask-wearing.There have been several incidents across the country that have sparked criticism and warnings from leaders such as packed beaches in Florida and California in May and June and large outdoor parties in New York City and the Hamptons in July. Crowding, specifically large gatherings where social distancing is difficult and attendees travel from outside the area are of particular concern, according to the Centers for Disease Control and Prevention (CDC). Risk increases with the number of people, length of the event and higher levels of community transmission.Sociological and political experts say that those behaviors may be a reaction to the rhetoric from their elected officials, even from those who stress caution during the reopening process.While some people deliberately ignored the warnings from day one, others who stuck to the social distancing rules may have relaxed their caution after seeing reports that the coronavirus curve was flattened in the spring, Allison Earl, an associate professor of psychology at the University of Michigan who specializes in health messaging, told ABC News”People rely on their experts when it comes to an assessment of risk,” she told ABC News. “People may recalibrate their judgment but they may not be accurate when they do.”Although it is impossible to change everyone’s risk assessment, Earl and other experts say consistent messaging, which relies on education rather than fear, could help change these behaviors.

Mixed messages muddy the watersOne of the biggest factors behind people disregarding social distancing is the mixed messaging they have been receiving from their leaders since the pandemic began, according to Will Howell, the head of the University of Chicago’s political science department.

President Donald Trump’s frequent downplaying of coronavirus dangers and mixed messages on the pandemic, in sharp contrast to many health experts and local leaders, confused some Americans and influenced their decisions to keep going on with their lifestyles, according to Howell.There was also tremendous pressure, even at the height of the initial surge of the pandemic in the Northeast, to reopen the economy — pressure that influenced states that are now coping with outbreaks of the virus.”Ours is a political culture where significant numbers of the American public don’t want to be told what to do,” he told ABC News.The messaging from leaders who rolled back shelter-in-place orders starting in late April, such as Texas Gov. Greg Abbott and Florida Gov. Ron DeSantis, only amplified that notion, Howell said. While both leaders urged their residents to wear masks and avoid large crowds when they could, they also encouraged people to enjoy the outdoors.”I think that to be able to get people out in the sunshine and be able to get some fresh air. I’ve always promoted essential activities with recreation,” DeSantis told reporters on April 17. At the time, Florida had 24,753 total COVID-19 cases, according to the Florida Health Department.By contrast, leaders in New York, which had 236,742 cases on April 17, urged socially distanced outdoor recreation but did not open beaches or other venues until a month later.When Abbott announced Texas’ phase 2 reopening on May 18, when the state’s Health Department recorded 48,693 total confirmed cases, he offered the public assurances that they were successful in their efforts to contain the disease. The reopening included several indoor businesses including bars.”We’ve seen no evidence, no signs that raise any concerns about the possibility of retrenchment in Texas,” he said during his news conference that day.When Abbott began phase 3 of Texas’ reopening plan on June 3, where all businesses, including indoor dining, could reopen at 50% capacity, he touted the state’s COVID-19 data at the time. At that point, the state had 68,271 confirmed cases, according to Texas’ Health Department.”The people of Texas continue to prove that we can safely and responsibly open our state for business while containing COVID-19 and keeping our state safe,” Abbott said in a statement on June 3.Images of crowds, including some not wearing masks, began to be common in Florida and Texas following the reopenings, especially in restaurants and beaches. In the subsequent weeks, the COVID-19 cases, deaths and hospitalization rates began to rise in those states.A Memorial Day pool party in the Ozarks where people were seen crowded and without masks drew heavy criticism from health officials. And in New York, which has not allowed indoor dining since the pandemic began, there have been reports of secret parties and pictures of large crowds outside bars.DeSantis attributed the increase in Florida cases to young people gathering and although he pushed for more residents to wear masks and socially distant, he did not implement more restrictions on preventing such crowds from gathering.”You have to have society function, you have to be able to have a cohesive society,” he said on June 17.As of July 29, Florida recorded nearly 442,000 total cases and Texas has recorded 394,265 total cases, according to states’ respective health departments.Florida’s seven-day average of daily reported cases jumped from 1,038 at the beginning of May to 10,306 on July 29, according to Florida’s health department. The seven-day average of newly daily reported cases in Texas has risen from 1,142 cases at the beginning of May to 7,504 on July 29, according to the state’s health department.Representatives for Abbott didn’t return messages for comment. On July 3, after calls from local leaders and health officials across Texas, Abbott instituted a mandate for masks.Fredrick Piccolo, a spokesman for DeSantis, told ABC News in a statement that the governor’s administration has taken several measures to keep crowd sizes down. On July 21, the state’s surgeon general, Scott Rivkees, issued a public health advisory that forbids crowds of more than 10 people.”Additionally, the governor has held dozens of press conferences and roundtables with medical professionals over the past few months where he emphasizes this guidance and implores the elderly and medically vulnerable to avoid large crowds whenever possible,” Piccolo said in a statement.

Even states that flattened the curve are having crowd problemsEarl said that people generally take their cues on risk from their leaders and the one constant messaging from all officials was, “flatten the curve.” This message on its own, however, can be problematic for long-term solutions against the pandemic, since it provides people who may have adhered to the restrictions an early out from their social distancing behaviors, according to Earl.”Once people reach their goals, they stop putting effort into those goals,” Earl said. “The idea that some people have is ‘I have this goal that is important to me…I no longer need to put the effort because it’s done."”Earl noted that this issue is happening among people who live in states that still have restrictions and decreased COVID-19 cases, like New York and New Jersey. Even though New York Gov. Andrew Cuomo and New Jersey Gov. Phil Murphy have repeatedly warned their constituents that their states aren’t out of the woods, there have been recent examples of large gatherings.New York had roughly 417,000 total coronavirus cases as of July 29; however, the state’s seven-day average for newly reported cases has gone from a peak of 4,300 cases a day in April to 671 on July 29, according to the New York health department.New Jersey had roughly 182,000 total cases as of July 29; however, its seven-day average for newly reported cases has gone from a peak of 2,697 cases a day in April to 434 on July 29, according to the state’s health department.On July 25, an estimated 2,000 people showed up to an outdoor charity concert in the Hamptons, on Long Island, and the next day, police in New Jersey said they broke up a party at an Airbnb location where 700 people attended.Both incidents are being investigated by state officials.Earl said those incidents demonstrate the notion that people have a mental breaking point when it comes to health advisories. As a result, some will eschew the health dangers for their pleasure, she said.”That [health] vigilance is energy expensive and we as humans we can’t do it forever,” she noted.Elected officials have been changing their messaging to encourage more people to avoid crowds, and experts say this a good first step.”In a political climate like ours where distrust runs rampant… and there is a sense that a lot of our elected officials don’t have our best interest in mind, it’s hard to do that,” Howell said. “We need people to say this is a common threat.”Gov. Murphy tweeted harsh warnings to residents following the Airbnb incident. New Jersey, one of the states that managed to get a handle on the virus after thousands of cases and deaths, is now seeing a resurgence in cases, with eight emerging hotspots on the latest map from FEMA.”This is no time for anyone to be vying for induction into the Knucklehead Hall of Fame. Coronavirus is more easily transmitted indoors. Crowded indoor house parties are not smart or safe,” he tweeted.A spokesman for Murphy’s office added in a statement to ABC News the governor “has made a commitment to ensure that timely, fact-driven information related to the State’s ongoing response efforts is readily accessible to New Jerseyans.”Gov. Cuomo, who in the past called some of the gatherings in the state “stupid,” has also repeatedly urged New Yorkers to remain vigilant while at the same time shutting down establishments that violate state reopening guidelines.

Rich Azzopardi, a spokesman for Cuomo, told ABC News his office is working to get the message across.”We’re moving heaven and earth is continue this momentum with ad campaigns, constant messaging through social and earned media and tackling the places where we’ve seen clusters in other states — large indoor areas, crowded bars, gyms, etc,” he said in a statement.The best way forwardEarl warned that leaders have to watch their words carefully as the public continues to gauge their risk. She noted that numerous psychological studies have proven that tactics that involve invoking fear or shaming are worse for people in the long term.”If you engage in a behavior because you’re afraid, the minute you’re not afraid is when you re-engage in the behavior,” she said.Earl suggested that leaders should focus on explaining to the public the benefits of increased social distancing and mask wear.”Help people understand the actions you want to take,” she recommended. “It will change their attitudes about engaging in the risky behavior or not.”

What is next for Juul after FDA temporarily suspends ban of its e-cigarettes and other products?

Pediatric COVID-19 cases rising for 1st time since May