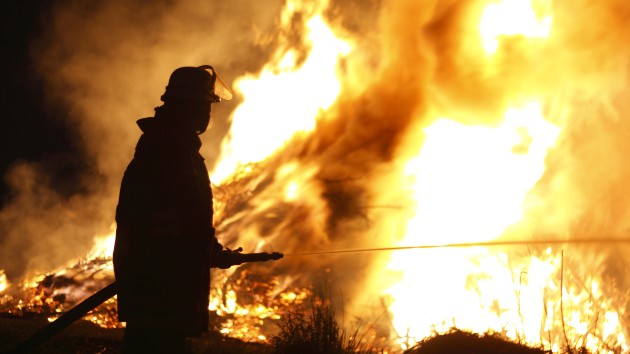 deepblue4you/iStockBy MEREDITH DELISO, ABC News(NEW YORK) — After more than two days, firefighters are starting to contain the enormous Apple Fire burning in Southern California.As of Sunday night, the blaze had burned more than 20,500 acres in Riverside County, officials said.The fire was 5% contained as of Sunday night, according to officials with the San Bernardino National Forest Service.Thousands of people have been ordered to evacuate as the massive wildfire continues to rage.More than 2,200 firefighters, along with several air tankers and helicopters, have been deployed to battle the blaze from the ground and air, the Riverside County Fire Department said. The northern and eastern edges of the fire are in steep, rugged hillsides not accessible to firefighting vehicles, officials said.About 7,800 people in 2,586 homes in Riverside and San Bernardino Counties were under evacuation orders as of Saturday evening, authorities said. At least one home and two outbuildings in Cherry Valley were destroyed by the fire, officials said. No injuries have been reported.The wildfire has been burning since Friday afternoon. Fire officials reported at least two separate fires — one about 3 acres, the second about 20 acres — burning near each other shortly before 5 p.m. on Friday. Three hours later, the fire was 700 acres, officials said, prompting evacuation orders.By Saturday morning, the blaze had more than doubled in size, to 1,900 acres. More evacuation warnings and orders were issued throughout the day, with several remaining in place Sunday.The San Bernardino National Forest Service is in unified command with the California Department of Forestry and Fire Protection, among other agencies.As of Friday, 38 large fires had burned more than 196,000 acres across the country so far this year, according to the National Interagency Fire Center. Copyright © 2020, ABC Audio. All rights reserved.