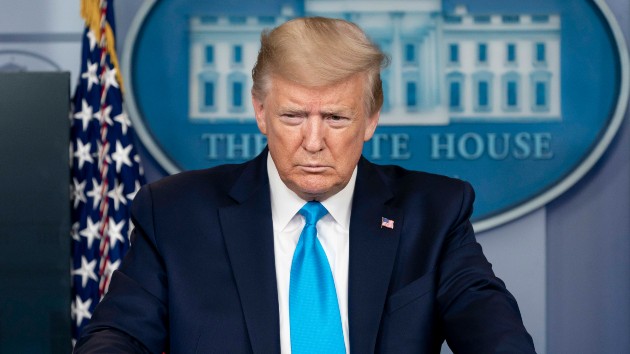 (WASHINGTON) — President Donald Trump continued to push a rosy outlook on the future of the coronavirus crisis on Monday, claiming “the virus is receding,” just one day after a prominent task force doctor warned it’s “extraordinarily widespread” as the U.S. enters “a new phase” of the pandemic.”We are beginning to see evidence of significant progress,” Trump said Monday evening in a press conference, even as coronavirus cases increased in roughly 15 states and deaths have increased in 35. “The virus is receding.”His remarks focused on those states with declining positivity rates, as opposed to the dozens of states the coronavirus task force is monitoring for further outbreaks.”In hot spots across the South and West, we’ve seen slow improvements from their recent weekly peaks,” Trump continued.”As we begin to contain the virus in these states, we must focus on new flare ups in the states where the case numbers have risen, including Georgia, Mississippi, Tennessee, Oklahoma, Missouri, and I think you’ll find that they’re soon going to be very much under control,” he said.Trump made a point to voice his resistance to states reversing on their reopenings, despite some public health experts calling for areas of the country to enter a hard lockdown to stamp out the coronavirus.”Lockdowns do not prevent infection in the future. They just don’t. It comes back — many times, it comes back,” he said.White House coronavirus response coordinator Dr. Deborah Birx came under fire from the president earlier in the day for her response to criticism from House Speaker Nancy Pelosi, with Pelosi telling ABC’s This Week Co-anchor Martha Raddatz that the task force doctor has delivered misleading information to please the president.Though Trump has attacked several groups for their assessment of the coronavirus crisis — including governors, journalists and heath experts, such as the nation’s top expert on infectious diseases, Dr. Anthony Fauci — it was the first time he has fired off directly at Birx, saying she “took the bait & hit us.”When Trump was asked about his tweet about Birx, he at first dodged the question, deflecting to how other countries are dealing with the pandemic, before saying he had “a lot of respect” for her.”I think we’re doing very well. I told Dr. Birx I think we’re doing very well. She was at my office a little while ago. She’s a person I have a lot of respect for. I think Nancy Pelosi has treated her very badly — very, very badly. Very nasty,” Trump said, adding the administration hasn’t been given enough credit for their efforts on ventilators and testing.He did not answer a follow-up question on whether he agreed with Birx’s current characterization of outbreaks in the U.S.Asked about how he could act unilaterally as coronavirus relief negotiations stall on Capitol Hill, Trump said that he could stop evictions through an executive order and could also take action on the collection of payroll taxes — something several outside advisers have advocated for.Despite the deadlock on a deal, Trump said discussions are “very good,” but criticized Democrats’ efforts to secure relief for state and local governments, which he has derided as a “bailout” for “Democrat-run states and cities.”The president continued to offer an optimistic timeline for a coronavirus vaccine, claiming it may come “far in advance of the end of the year,” and urged Americans who have recovered from the coronavirus to donate their blood plasma, potentially rich in COVID-19 antibodies to fight the virus in other patients.Ahead of the briefing, Trump signed an executive order aimed at expanding health care access in rural areas and increasing access to care through telehealth.

President Trump says he approved TikTok deal with Walmart, Oracle in ‘concept’
Amy Coney Barrett front-runner on Trump list of potential Justice nominees: Sources
Trump calls on Senate Republicans to act ‘without delay’ on SCOTUS pick
DHS whistleblower may not appear before Congress next week, lawyer says
Trump’s leadership is ‘opposite of racism’: Kim Klacik on ‘The View’
Black man beaten by Georgia deputy speaks out after release from jail: ‘I feared for my life’