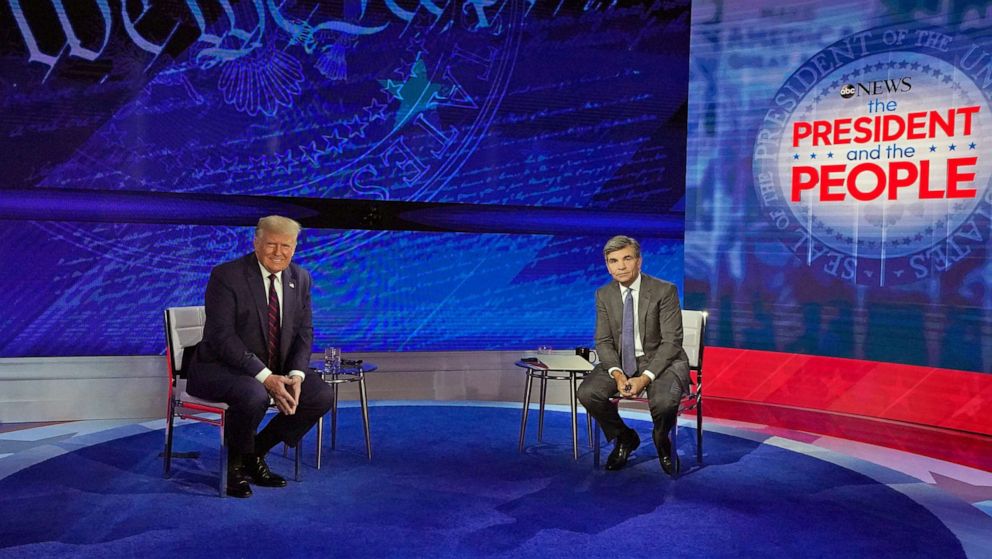 By ABC NEWS(PHILADELPHIA) — President Donald Trump answered questions from uncommitted voters Tuesday night during a town hall hosted by ABC News from the battleground state of Pennsylvania.Below, ABC News fact checks what Trump said throughout the 90-minute special, which was anchored by ABC News Chief Anchor George Stephanopoulos.This story will be updated throughout the special. Please refresh for new fact checks.

Trump is wrong to suggest there is no consensus on wearing masksTRUMP’S CLAIM: “People don’t want to wear masks. There are a lot of people [who] think the masks are not good.”FACT CHECK: This view does not reflect the scientific consensus.The recommendation to wear a mask is now almost unanimous among health experts, including some of the president’s own appointees, who have all been very vocal in encouraging the American people to wear masks to curtail the spread of the disease.Both the Centers for Disease Control and Prevention and the World Health Organization have issued statements urging people to wear masks in public settings.”There are people that don’t think masks are good,” Trump said, prompting Stephanopoulos to ask, “Who are those people?””Waiters,” Trump said. “They come over and they serve you, and they have a mask. They’re playing with the mask, so the mask is over and they’re touching it, and then they’re touching the plate. That can’t be good.”But researchers from Stanford University found the opposite.”Wearing a mask reminds people to continue to be cautious,” they said. “With a mask on, you actually touch your face less.”In an interview last month on ABC News’ “World News Tonight,” Dr. Anthony Fauci, the director of the National Institute of Allergy and Infectious Diseases, said “a universal wearing of masks is one of five or six things that are very important in preventing the upsurge in infection.””We know that during the first wave of the pandemic, those countries that implemented masking early were more successful than others at reducing the spread of the virus,” the Stanford researchers wrote.Duke University researchers have also concluded that “if 95 percent of people wear cloth masks when within 6 feet of other people in public, it will reduce COVID-19 transmission by at least 30 percent.”Trump noted that health experts had originally recommended against wearing a mask — but his claim was misleading.”If you look at Dr. Fauci’s original statement, you look at a lot of people — CDC — they said very strongly, George, [they said], ‘Don’t wear masks,"” Trump said. “Then all of a sudden, they went to ‘wear masks."”At the beginning of the pandemic, the CDC and the WHO, as well as Fauci and other top experts, initially discouraged wearing masks because of concerns that masks and other personal protective equipment were in short supply for health care workers who needed them.While Fauci mainly cited the need to conserve masks, he did say in an interview with “60 Minutes” that wearing a mask may also have unintended consequences, such as leading people to touch their face more often to adjust them, spreading germs from their hands.In early April, the CDC changed its recommendation about face coverings for the general public, based on evidence that a significant number of people who were asymptomatic or not yet feeling sick were transmitting the virus.–Arielle MitropoulosTrump claims he didn’t ‘downplay’ COVID-19 — despite admitting to having done just thatTRUMP’S CLAIM: “I didn’t downplay it. I, actually, in many ways, I up-played it, in terms of action. My action was very strong.”FACT CHECK: During the town hall, Trump said he “didn’t downplay” the virus — when in fact, he has admitted to just that.”I wanted to always play it down,” Trump said in a March 19 interview with veteran journalist Bob Woodward, according to CNN, which obtained an audio recording of the interview, and The Washington Post. “I still like playing it down, because I don’t want to create a panic.”When the audio was first played last week, a reporter asked if he had misled the public in order to reduce panic.”I think if you said, ‘in order to reduce panic,’ perhaps that’s so,” Trump replied. “I’m a cheerleader for this country.’After Trump said Tuesday night he “didn’t downplay it,” Stephanopoulos pressed him: “Did you not admit to it yourself saying that you–?””Yeah, because what I did was, with China, I put a ban on,” Trump said, referring to limitations he put on travel from China starting on Feb. 2. “With Europe, I put a ban on, and we would have lost thousands of more people had I not put the ban on,” he added; the ban on certain travel from Europe began March 13.”So that was called ‘action,’ not with the mouth but in actual fact,” Trump said.–Ben GittlesonBlack-white income gap persisted before pandemic, and Trump does not have ‘tremendous African American support’TRUMP’S CLAIM: Trump claimed that he had “tremendous African American support” and that, “had we not been hit by this horrible disease … we would be in a position where I think income inequality would be different. It was really getting there. We were really driving it down — I can only compare it to the past. The African American, the Black community, was doing better than it had ever done by far, both in terms of unemployment, homeownership, so many different statistics.”FACT CHECK: The income gap between Black and white Americans has persisted since 1970, despite Trump’s comment that it had improved before the COVID-19 pandemic hit.Median Black household income was 61% of median white household income in 2018, according to the Pew Research Center.The homeownership gap between Black and white individuals was also at the widest level in 50 years in 2017, according to a 2019 report from the Urban Institute, a nonpartisan think tank.The president, in his pitch to the Black community, also said, “We have tremendous African American support. You’ve probably seen it in the polls, we’re doing extremely well with African Americans.”But his claim runs counter to recent polling, in which he garners between 5% to 11% support among Black likely voters, according to polls from Fox News and Quinnipiac University.The most recent polling is similar to where Trump stood in 2016, when 8% of African American voters supported him, according to exit polls. Trump saw slightly higher support in 2016 among this demographic compared to Mitt Romney when he ran on the Republican ticket for president in 2012, and received 6% of the Black vote.–Stephanie Ebbs and Kendall Karson

COVID-19 is unlikely to go away on its own, despite Trump’s insistenceTRUMP’S CLAIM: COVID-19 is “probably going to go away now a lot faster because of the vaccine. It would go away without the vaccine, George, but it’s going to go away a lot faster with the vaccine,” Trump said. Stephanopoulos asked, “It will go away without the vaccine?” To which Trump said, “Sure, over a period of time. Sure, with time it goes away.”FACT CHECK: This statement is misleading.The virus is unlikely to go away definitively even with a vaccine. Similar to what has happened with past pandemic influenza viruses and the more mild human coronaviruses that cause “colds,” experts believe that as the pandemic wanes, it may synchronize to a seasonal pattern with diminished severity over time due to mutations and reinfection.Even so, its trajectory is difficult to predict as the virus is still being studied.-Sony Salzman and Dr. Alexandra LambertCopyright © 2020, ABC Audio. All rights reserved.