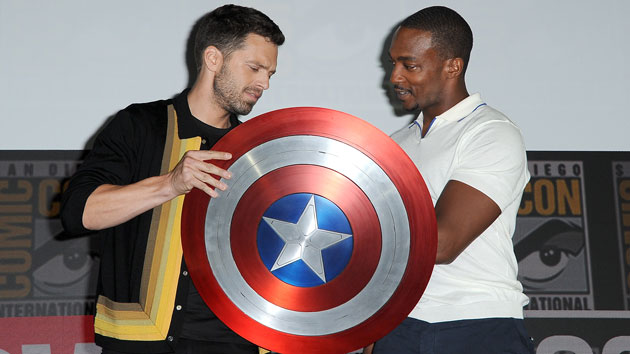 (ATLANTA) — Anthony Mackie and Sebastian Stan have shared photos of their return to the set of The Falcon and the Winter Soldier.

Like many productions, The Falcon and the Winter Soldier was halted in March while shooting in Prague due to the COVID-19 pandemic.

But the Disney+ series has since resumed production in Atlanta, with two of its stars posting black-and-white photos to social media showing that they are back to work social distance-style.

Stan turned to Instagram to share a photo of himself taking a photo of his co-star posing thoughtfully against a brick wall. Both of the men are in costume.

“Friends. Social distancing since November ’19,” Stan jokes in the caption.

Meanwhile, Mackie turned to Twitter to showcase the solo shot Stan took of him casting a suave look at the camera in his superhero attire.

“The boyz are back in town! Having fun while social distancing…” he writes.

Mackie and Stan are reprising their roles as Falcon and Winter Soldier, respectively, from the 2019 film Avengers: Endgame.

The series picks up where the film left off after the character of Steve Rogers, portrayed by Chris Evans, gives the Captain America shield to Falcon.

The Falcon and the Winter Soldier is currently scheduled for release later this year on Disney+.

Disney is the parent company of ABC.

Breaking down the Supreme Court nomination, confirmation process
Trump’s leadership is ‘opposite of racism’: Kim Klacik on ‘The View’
Black man beaten by Georgia deputy speaks out after release from jail: ‘I feared for my life’
Challenges aside, Emmy producers Reginald Hudlin and Ian Stewart say the show will be “great”
Coronavirus live updates: Controversial testing guidance ‘absolutely came from the CDC,’ official says
Chrissy Teigen reveals the sex of her unborn baby