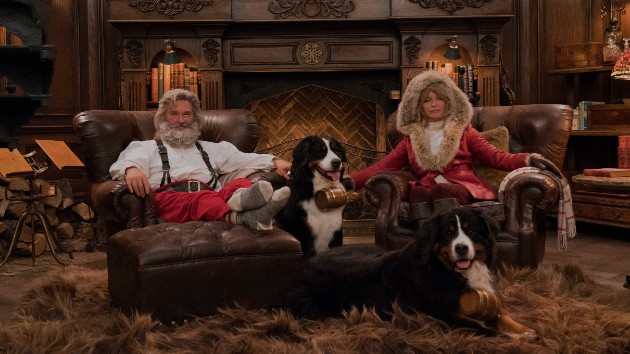 (LOS ANGELES) — Netflix has released a teaser for The Christmas Chronicles 2, which sees real-life couple Kurt Russell and Goldie Hawn reprising their roles as Santa and Mrs. Claus.

“We’re about to show you something you’ve never seen before,” Hawn narrates in the 30-second clip as a vintage book titled The Christmas Chronicles opens to reveal a snow-covered, enchanted Christmas scene with a massive tree in the town square known as “Santa’s Village.”

Santa then informs the two children who’ve come to visit them, including original character Kate Pierce, that Mrs. Claus was in fact the one who designed it, with Kate suggesting that it should instead be called “Mrs. Claus’ Village.”

“Why I never thought of that,” he replies, to which Hawn quips, “of course he didn’t.”

Hawn made a brief appearance as Mrs. Claus at the end of the original The Christmas Chronicles, which premiered in 2018. Her son Oliver Hudson also had a supporting role as Doug Pierce, the deceased husband of Kimberly Williams-Paisley’s Claire Pierce.

The Christmas Chronicles 2 will debut on Netflix on November 25.