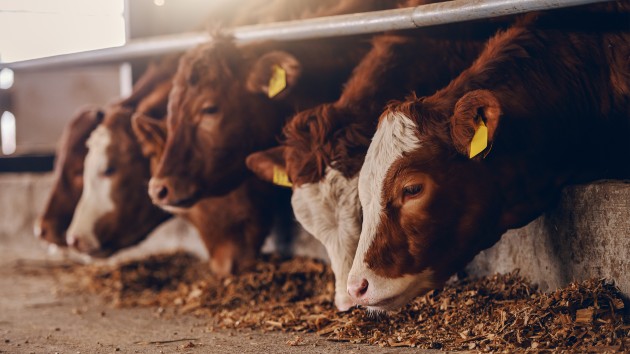 By JULIA JACOBO, ABC News(NEW YORK) — Much of the focus on efforts to mitigate climate change is placed on industries such as electricity production and transportation, but global food production is a major contributor to the collective release of greenhouse gas emissions and plays a major role in the threat to the climate fight, researchers have determined.Even if the emissions from the fossil fuels used in the food system were “immediately halted,” the remaining greenhouse gasses released in the food production process would still make meeting the Paris Agreement’s more ambitious target of limiting temperature increases to 1.5 degrees Celsius above preindustrial levels “very difficult,” according to a study published Thursday in Science.The less ambitious goal of the Paris Agreement aims to prevent global temperatures from rising 2 degrees Celsius above pre-industrial revolution temperatures, the value that climate scientists have determined will have disastrous consequences if exceeded. Climate experts have said that even with the collective pledges from nearly 200 countries, it’s unlikely the goal will be met.Reducing food system-related emissions is critical to meeting the 1.5-degree or 2-degree Celsius warming targets, the researchers found.The global food system accounts for nearly a third of the world’s greenhouse gas emissions, according to the study. Major sources for the emissions include the clearing of land and deforestation for agriculture and livestock production, production and use of fertilizers and combustion of fossil fuels in food production and supply chains, the study says.Between 2012 and 2017, worldwide food production released an average of about 17.6 billion metric tons of carbon dioxide, researchers said.If the food production industry were to continue as business as usual between 2020 and 2100, it could amount to as much as 1,356 gigatons of emissions, an amount that would exceed the 1.5-degree benchmark between 2051 and 2063 and perhaps even the 2-degree benchmark by the end of the century, according to the study.”These emissions could be significantly reduced through changes in diets, agricultural efficiency and reductions in food waste, which, if fully realized, could result in a carbon neutral or even marginally carbon negative food system,” the study states.Copyright © 2020, ABC Audio. All rights reserved.