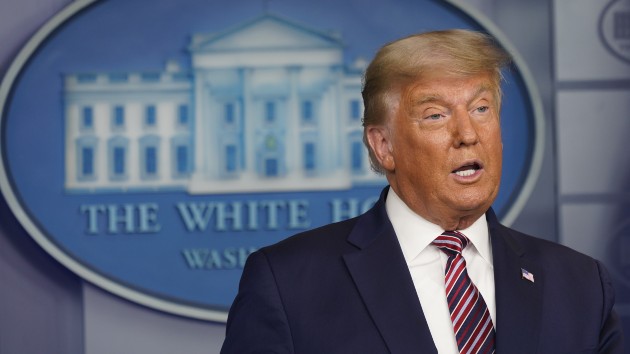 By MATTHEW MOSK, KATHERINE FAULDERS and JOHN SANTUCCI, ABC News(WASHINGTON) — After weeks of speculation about the potential for a tight 2020 presidential contest to wind up in court, the Trump campaign appears to have unveiled its strategy: a succession of lawsuits in hard-fought swing states and a full-court press to give the impression that the election and ballot-counting process were rife with fraud.”Guys, this is fraud. This is absolute fraud,” Eric Trump, the president’s son, said at a press conference Wednesday after filing a complaint about what he considered a lack of transparency at a Philadelphia vote processing center. “They’re trying to make a mockery of the election of this country.”In a series of suits filed in Pennsylvania, Michigan, Georgia and Nevada, the Trump team argued a range of complaints, mostly focused on their view that campaign observers were being denied sufficient access to watch mail-in ballots opened. That was paired with the president, his family and surrogates suggesting that there were ballots dumped at counting locations and that his lead “magically” disappeared on election night.But legal experts who reviewed the lawsuits said they saw no evidence of fraud. And many told ABC News they puzzled over the ultimate objective of cases because they did not seem destined to find the president significant numbers of votes or change the election’s outcome.Justin Levitt, a professor at Loyola Law School in Los Angeles, called one Pennsylvania case, which complained that voters were given a chance to correct their mail-in ballots, “a tweet with a filing fee” in an interview with ProPublica. The case reportedly would only affect 93 ballots, by one estimate.”I don’t see any real legal strategy here,” said Wendy Weiser, who directs the Democracy Program at the Brennan Center for Justice at NYU School of Law. “They look more like public relation stunts meant to create a false impression that the election is filled with improprieties and fraud.”Fighting for observer accessThose behind the president’s legal moves told ABC News their chief aim has been to draw attention to the vote-counting process, especially for those ballots cast by mail. The president has long made the unsubstantiated argument that mail-in voting, which millions availed themselves of during the coronavirus pandemic, was primed for widespread fraud.Deputy campaign manager and senior counsel Justin Clark released a statement accusing Pennsylvania Democrats of trying to “steal this election from President Trump … [by keeping] eyes off of the absentee ballot counting process.”Under election rules, both candidates are permitted to dispatch observers to watch the election workers open ballots and review them to ensure they are legitimate. But in the midst of the coronavirus pandemic, many states have enforced social distancing rules that Trump observers argued has made it difficult for them to see and compare voter signatures or find other potential flaws in the ballots. President Donald Trump said on Thursday his campaign’s observers had to “use binoculars” to watch the process.”We were supposed to be allowed by law to observe the counting of the ballots,” Trump’s personal lawyer, former New York City Mayor Rudy Giuliani, said Wednesday.

He said the Trump team has not been able to see if ballots were properly postmarked, properly addressed, properly signed on the outside — “all the things that often lead to disqualification of ballots.”Neither signature issues nor other flaws in ballots, on their own, are necessarily indications of fraud. Thousands of ballots have been rejected in the past several election cycles, mainly for issues with signatures and other technical issues. In Pennsylvania, elections officials also have to provide voters notice of problems and give them a chance to “cure” their ballots so their votes will count.Weiser called the request for closer access fairly routine, though one made more complicated by the pandemic. But nothing about the case would yield the president more votes in the state, or work to negate votes already counted for his opponent. That’s because any ballots already removed from mailing envelopes are machine-counted anonymously — there is no way to trace their origin.By the time the lawsuits were filed, huge numbers of ballots had already been processed. Observers would have to discover huge numbers of faulty envelopes or mismatched signatures in the remaining pool for there to be an appreciable difference. Past elections indicate those errors are relatively rare.When a Pennsylvania judge issued an order telling elections officials to permit observers the ability to move a few feet closer, Biden campaign officials did not raise many objections. The state Democratic Party opted against joining an appeal filed by the city of Philadelphia.”We don’t care if your observers are 18 feet away or 15 feet away or 6 feet away — as long as election officials can do their jobs,” tweeted Biden spokesman Bill Russo.Weiser noted that several of the cases were filed in tandem with press conferences featuring Trump’s most loyal insiders — including Eric Trump and Giuliani.In his first press conference, Giuliani called the spacing rule for poll observers “one of the most anti-democratic things I’ve ever seen or encountered” without explaining himself further.Weiser said she viewed the suits as manufactured news events used by the president to sow doubt in the electoral process, regardless of their outcome.”It all looks more like an effort to inject conspiracy theory into the public,” Weiser said, “an attempt to sway public opinion to believe something dramatic is going on when there actually is no drama.”A rerun of Bush v. Gore?In the closing weeks of the 2020 presidential campaign, the potential for the outcome to end up in court became a heavy focus for both campaigns. Trump speculated openly that it might be important to have his new appointee to the U.S. Supreme Court in place for the election (Amy Coney Barrett has since been confirmed) — and that the result could wind up being a repeat of the 2000 election. That contest wound up before the nation’s high court in the case of Bush v. Gore, and concluded with a 5-4 decision that decided the presidency.In the weeks leading up to Election Day, the Trump team mounted a sizable legal effort. Biden countered by building a massive legal team led by former Obama White House counsel Bob Bauer and former U.S. Attorney General Eric Holder.It appeared the campaigns were headed for a serious dispute that could reach the U.S. Supreme Court over a case in Pennsylvania that argued ballots arriving by mail should not be counted if they arrived after Election Day. Republicans argued that a move to grant mail-in voters a three-day grace period for their ballots to arrive would need to come from the state legislature — as prescribed in the Constitution.The constitutional question captured the attention of four conservative justices. The court declined to act on the matter because the election was so close, but Chief Justice John Roberts and Justices Samuel Alito, Clarence Thomas and Brett Kavanaugh all offered initial views on the broader question of whether election changes could only be imposed by a state legislature.Weiser said the statements by those justices — with which she disagreed — grabbed attention in the legal community.But over the last 48 hours, the campaign’s legal strategy has instead been focused largely on smaller skirmishes over ballot-counting observers.Bauer on Thursday seemed almost bemused as he answered questions about the Trump team’s legal fusillade, which he called “silliness.””The lawsuits are meritless,” Bauer said. “All of this is intended to create a large cloud that, it is the hope of the Trump campaign, that nobody can see through. But it is not a very thick cloud. It’s not hard to see what they’re doing. We see through it. So will the courts, and so do election officials.”In interviews with ABC News, three current and former Trump advisers said privately that they agree that the strategy, if there is one, appears aimed more at influencing public opinion. None would agree to be identified for fear of running afoul of the president, but all of them told ABC News they found the legal approach misguided and disorganized, and found it notable that neither the campaign’s general counsel nor veterans of the president’s Washington legal team — other than Giuliani — have participated in the bulk of the cases.”I don’t see any evidence of a strategy at this point,” said one senior Republican attorney who has at times advised the president.So far, the campaign has seen little success beyond the one Pennsylvania ruling. A judge in Georgia outright dismissed the campaign’s suit in the state Thursday morning, citing lack of evidence. And just a few hours later a judge in Michigan announced her intent to deny another suit filed there.”Come on now,” Michigan Judge Cynthia Stephens said while looking over the evidence presented by the president’s lawyers in an attempt to halt the counting of ballots. “You failed to establish an actual controversy.”Copyright © 2020, ABC Audio. All rights reserved.