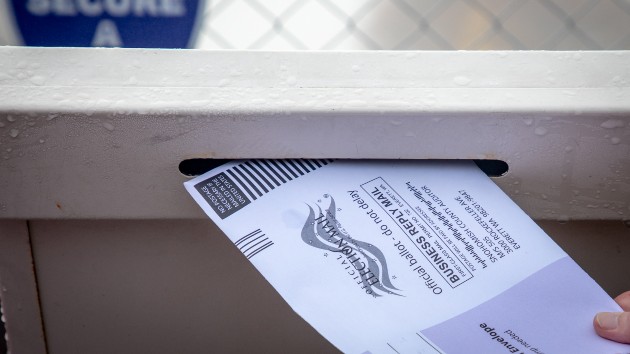 By KENDALL KARSON, ABC News(WASHINGTON) — All five key battleground states still outstanding — Pennsylvania, Arizona, Georgia, North Carolina and Nevada — allow voters to “cure” their mail-in ballots.If there is an issue with their absentee ballots, such as a signature-matching issue or a missing witness signature, these states allow voters a chance to fix their ballot in some form in order to help avoid their ballot being discarded and their vote not counting.In at least 18 states, officials are required to notify voters over a missing signature or signature discrepancy and give the voter an opportunity to correct it, according to the National Conference of State Legislatures.In Pennsylvania, Republicans are seeking court intervention to toss out votes in one county that contacted some voters to give them an opportunity to fix their ballots. The lawsuit aims to throw out “as many as 10,000” deficient mail-in ballots that were “cured” during the pre-canvassing process before Election Day.In some Pennsylvania counties, officials give voters the chance to correct or “cure” errors, such as in Bucks County, where about 1,600 voters were sent notices about ballot errors, and in Montgomery County, where officials notified voters directly about defective ballots and said 49 ballots were cured, according to a local ABC affiliate.In Arizona, if a signature is missing from the ballot affidavit, county recorders must reject the ballot, according to procedures from the secretary of state. The recorder then must make “a reasonable and meaningful attempt to contact the voter via mail, phone, text message, and/or email, to notify the voter the affidavit was not signed and explain to the voter how they may cure the missing signature or cast a replacement ballot before 7:00pm on Election Day.”In Georgia, the secretary of state’s website outlines that county elections officials contact voters whose ballots were rejected to provide them with the chance to “correct your ballot envelope.””One of the most common reasons an absentee ballot is rejected is because it has not been properly signed,” the website reads.In Nevada, the secretary of state’s office wrote in a FAQ for reporters Wednesday that voters who require a signature cure have until 5 p.m. on Nov. 12 to provide the required signature confirmation, and once that is done successfully by the deadline, the voter “will have their ballot counted.”And in North Carolina, before Election Day, officials, under new guidance, are to “spoil” a ballot if it is returned without a witness signature and issue a new one to the voter, unless the voter casts a ballot in-person. If there are other deficiencies, i.e missing voter signature, voter signature in the wrong place, the county board will send a voter a certification form to sign and return to ensure that the ballot is counted.Any ballots received between Election Day and Nov. 12 without witness signature will not be accepted and new ballots will not be issued. If there is a deficiency other than a missing signature those can be cured with a certification document until Nov. 12.Copyright © 2020, ABC Audio. All rights reserved.