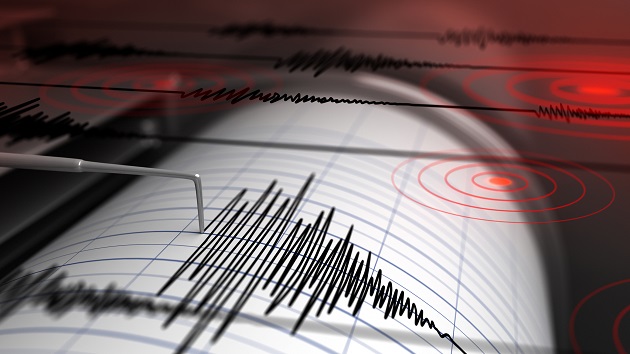 (BOSTON) — An earthquake struck Sunday off the coast of Massachusetts, jolting residents throughout New England, according to the U.S. Geological Survey.The earthquake measuring 3.6 on the Richter scale struck at 9:10 a.m. in the Atlantic Ocean about 8 miles off the coast of New Bedford in Buzzards Bay at a depth of 9.3 miles, the USGS reported.There were no immediate reports of injuries or major damage.The USGS initially measured the quake at 4.2 magnitude before downgrading it to a 4.0 and finally to a 3.6.Numerous people reported feeling the jolt across southeastern Massachusetts, including Cape Cod, and Rhode Island, Connecticut and New Hampshire, officials said.The Massachusetts Department of Emergency Management Agency said in a statement posted on Twitter that there is no danger of a tsunami occurring as a result of the earthquake.Police in Fall River, Massachusetts, about 15 miles east of New Bedford, reported receiving numerous calls from local residents startled by the quake.”Police communications received numerous calls regarding minor damage inside people’s homes that consisted of items falling off of shelves. There were also reports of two street signs that became uprooted. There have been no reported injuries associated with the earthquake,” Fall River police said in a statement on the department’s Facebook page.The last time New England experienced an earthquake of 4.0 or stronger was on Oct. 16, 2012, when a 4.5 magnitude temblor struck near Saco, Maine, according to USGS records.Sunday’s quake came just ahead of the 265th anniversary of the Cape Ann earthquake, the most destructive earthquake to hit New England, which damaged more than 1,000 homes. The Cape Ann quake struck on Nov. 18, 1755, about 30 miles off the north coast of Boston and sent shockwaves all the way to Montreal. Studies by the USGS estimate the earthquake was a magnitude 6.0 to 6.3.Copyright © 2020, ABC Audio. All rights reserved.