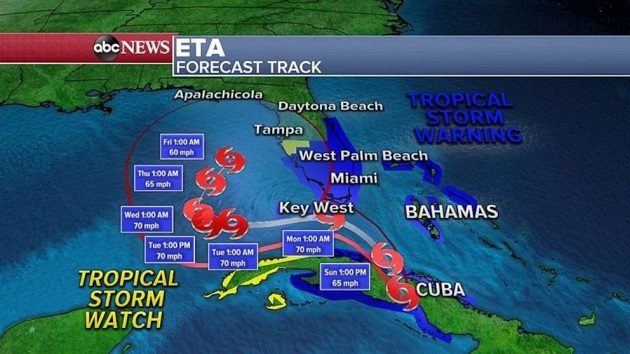 (NEW YORK) — Tropical Storm Eta made landfall early Sunday morning along the south central coast of Cuba with winds of 65 mph.The last named storm to make landfall in Cuba during November was Paloma in 2008.The storm is about 235 miles south-southeast of Miami and moving north at 14 mph.The center of Eta will pass near the Florida Keys Sunday night and be just West of the Keys by Monday morning.Rainfall continues to be the greatest risk with Eta, with locally over 2 feet of rain possible in parts of Cuba.Up to 14 inches of rain will be possible in the Bahamas and parts of Florida could see 12-18 inches of rain. In some cases, this will be enough to cause life threatening flash flooding.October in general tends to be a very wet month for southern Florida.An additional concern will be the storm surge. Storm surges locally of up to 4 feet will be possible in parts of southern Florida in the storm surge-prone areas.Additionally, there could possibly be tornadoes in Southern Florida as Eta moves through the region over the next 48 hours.Once Eta makes it into the Gulf of Mexico, Eta will begin to slow down and its direction then becomes unclear.Forecast models this morning actually have Eta stalling in the Gulf of Mexico through much of the upcoming week.While the exact location and direction of Eta and its eventual stall remain unclear, there is potential that cold fronts moving across parts of the eastern U.S. could draw tropical moisture from Eta and create a potential for flash flooding in some spots along the East Coast later this week.In the West, a storm system is beginning to move across part of the country, bringing snow, rain and some gusty winds.Some of the most organized areas of snow this morning are in parts of Montana and the Rocky Mountains where locally up to 3 feet is expected through Tuesday.This storm system and its associated dip in the jet stream is expected to bring wind gusts locally over 50 mph from parts of California all the way Wisconsin as wind gusts could be exacerbated in the higher terrains of the intermountain west.Elsewhere, Los Angeles received 0.11 inches of rain on Saturday, ending a 172-day streak of no rain which is its 7th longest streak in history.Las Vegas did not receive measurable rain and has smashed their record for longest dry streak already with 202 days since their last rainfall though the region might have an opportunity to pick up rainfall today.Copyright © 2020, ABC Audio. All rights reserved.