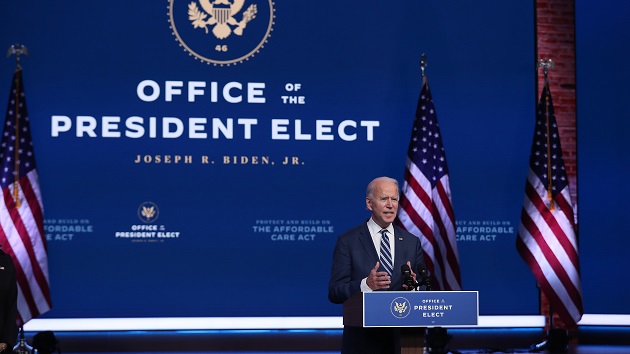 By MOLLY NAGLE, ABC News(WILMINGTON, De.) — President-elect Joe Biden on Tuesday called President Donald Trump’s refusal to concede “an embarrassment.”Speaking to reporters in Wilmington, Delaware, Biden, in his first comments on Trump not acknowledging his election, said, “I just think it’s an embarrassment, quite frankly. How can I say this tactfully? I think it will not help the president’s legacy.”

NEW: President-elect Joe Biden on Pres. Trump's refusal to concede the election: "I just think it's an embarrassment, quite frankly.""How can I say this tactfully? I think it will not help the president's legacy." https://t.co/D7t03ZfZfd pic.twitter.com/AzejxGFE2l

ABC News’ Mary Bruce asked Biden if he had reached out to President Trump. “And if he is watching right now, what would you say to him?” she asked.Biden grinned widely and spoke directly to the camera. “Mr. President, I look forward to speaking with you,” he said.”I think that — I know from my discussions with foreign leaders, thus far, that they are hopeful that the United States’ democratic institutions are viewed once again as being strong and enduring,” Biden said.“And — but I think at the end of the day, you know, it’s all going to come to fruition on January 20th. And between now and then, I hope an expectation is that the American people are — do know and do understand that there has been a transition, even among Republicans who are people who voted for the president,” he continued.”I understand the sense of loss. I get that, but I think the majority of the people who voted for the president, a lot voted for him, a significantly smaller number, but a lot voted for him. I think they understand that we have to come together. I think they’re ready to unite, and I believe we can pull the country out of this bitter politics that we’ve seen for the last — last five, six, seven, years,” Biden said, reverting to his call for unity.It was the first time Biden has taken reporter questions as president-elect and comes amid a standoff between the Biden transition team and the Trump administration on whether Biden should have access to congressionally-appropriated funds, among other resources, to proceed with his transition.Traditionally, the General Services Administration or GSA would recognize a candidate that has clearly won the election, allowing the winning ticket’s team to access a variety of resources available to aid the transition process, but so far, GSA Administrator Emily Murphy, who was appointed by Trump in 2017, has made no such determination.Biden, however, brushed off concerns about lacking access to intelligence — the President’s Daily Brief — as a result of the GSA not yet ascertaining him as president-elect, saying we have “one president at a time.””Well, look, access to classified information is useful, but I’m not in a position to make any decisions on those issues anyway. As I said, one president at a time, and he will be president until January 20th. It would be nice to have it, but it’s not critical,” Biden said. “We’re going to do exactly what we would be doing if he had conceded and said we won, which we have. And so there’s nothing really changing.”Pressed on whether his legal team could take action, as his transition team has said they are considering, a calm Biden said he did not see a need for it, and went on to say there is “no evidence” of any irregularities in the election.”No, I don’t see a need for legal action, quite frankly,” Biden said. “You’re seeing it play out, the actions he’s taking. And so far, there is no evidence of any of the assertions made by the president or Secretary of State Pompeo.”Asked about Secretary of State Mike Pompeo’s earlier declaration that there would be a “smooth transition to a second Trump administration,” Biden again brushed off any concerns.”Well, first of all, we are already beginning the transition. We’re well under way,” Biden said. “And the ability for the administration in any way by failure to recognize this — our win does not change the dynamic at all and what we’re able to do.””So I’m confident that the fact that they’re not willing to acknowledge we won at this point is not of much consequence in our planning and what we’re able to do between now and January 20th,” he added.

"We are already beginning the transition," Pres.-elect Joe Biden says as Pres. Trump refuses to concede. "Nothing's going to stop that." "The fact that they're not willing to acknowledge we won at this point is not of much consequence in our planning." https://t.co/D7t03ZfZfd pic.twitter.com/KBl2uB7ean

Despite the lack of acknowledgement from the president and Pompeo, several notable foreign heads of state have congratulated Biden on the election including calls with leaders in Canada, France, Germany, Ireland and the United Kingdom.”First of all, I’m letting them know that America is back,” Biden said. “The reception and welcome we’ve gotten around the world from our allies and our friends has been real. I have a number of other calls to return.”ABC News’ John Verhovek, Beatrice Peterson and Averi Harper contributed to this report.Copyright © 2020, ABC Audio. All rights reserved.