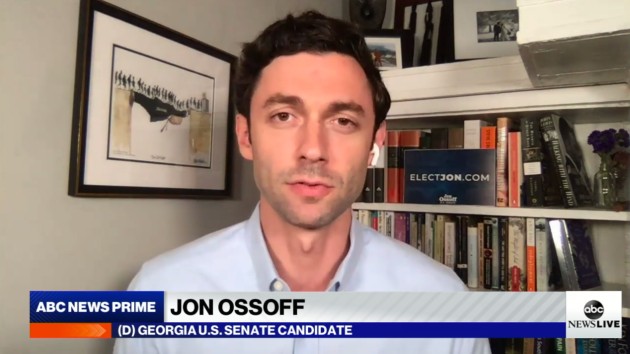 (NEW YORK) — Georgia U.S. Senate Candidate Jon Ossoff appeared on ABCNL Prime Monday, sharing his vision of what he and Georgia Democrats will need to do to win both Senate runoffs in January.All eyes are on the Peach State as the balance of power in the Senate rests on the outcome of the race between Ossoff and incumbent Republican Sen. David Perdue, as well as the race between Republican Sen. Kelly Loeffler and Democratic Senate Candidate Raphael Warnock.Ossoff told ABCNL Prime anchor Linsey Davis that Democratic control of the Senate will be critical for the Biden-Harris administration to pass impactful legislation that will adequately address the COVID-19 outbreak.“There are hundreds of thousands of American lives that still hang in the balance if we fail to properly respond to this pandemic. The Biden administration can’t do it alone. The President-Elect will need Congress to respond,” Ossoff said.“We’re ready to proceed and win these runoff elections to ensure that we can get out of this pandemic and pass economic relief for working families and small businesses,” he later added.Historically, Georgia has trended Republican for nearly three decades and run-off elections have almost always ended in the favor of Republican candidates.When former President Bill Clinton won Georgia electoral votes for president in 1992, Democratic Sen. Wyche Fowler was leading in the general election but ultimately lost to Republican Paul Coverdell in the runoff.In 2018, then-gubernatorial candidate Stacey Abrams lost in a runoff against the then-Secretary of State and now-Gov. Brian Kemp.While the 2020 presidential race has not been called in Georgia, Biden remains in the lead and the race is set for a recount.Some Democrats see the tight race as a sign of change and momentum in the state.While political experts may look at a Georgia Senate run-off as an uphill battle for Democrats, Ossoff says he is not worried about his chances despite getting roughly 100,000 fewer votes than Joe Biden.“That doesn’t worry me at all… There was no enthusiasm in Georgia, even among Republican voters for incumbent senators David Perdue or Kelly Loeffler,” he said.Ossoff believes while Democrats are invigorated by the results in the election, Republican voters will not show up when President Donald Trump is not on the ballot.“Those who came out and voted for him weren’t motivated because they support Loeffler and Perdue; they were voting in the presidential race,” the Democratic Senate candidate said.“Meanwhile Georgia Democrats have tremendous momentum. We’re invigorated by our success here. This has been a 10-year effort to register voters, organize and train volunteers as the state becomes younger and more diverse. And we’re ready to proceed and win these runoff elections,” he continued.The momentum in Georgia was brought on, in large part, by Abrams who founded Fair Fight and The New Georgia Project, two separate voting rights organizations, which increased voter registration and voter turnout in the 2018 and 2020 elections.The New Georgia Project has already begun recruiting volunteers to help with canvassing efforts for Ossoff and Warnock.Jaira Burke, Rapid Response director of the New Georgia Project, told ABC News that the organization will work to galvanize Democratic voters through January.“We’re going to be registering people to vote, talking to people about the electoral process and how that impacts their lives,” Burke said.Abrams has raised over $7.2 million through Act Blue, an online fundraising platform for Democratic candidates. The money will be split evenly between Ossoff and Warnock.In his response to the Senate runoffs, Sen. Perdue’s recent attacks against Ossoff have nationalized the race. Perdue said in a statement that a vote for Ossoff is “a vote to hand power to Chuck Schumer and the radical Democrats.”Given the high stakes, Ossoff admitted the Georgia senate race would inevitably be nationalized.”You’re going to hear all those typical nationalized arguments. This race inevitably becomes nationalized to an extent because there are national implications. What I’m doing is staying focused on the stakes and the stakes are both national and local,” Ossoff said, explaining that he will continue to center healthcare access and containing the pandemic in his campaign.“We’re still in the midst of an economic crisis. That’s what Georgia voters are focused on and in order for us to get out of this crisis, we need to be able to govern. And that means we need to win these two elections,” Ossoff said.Ossoff blasted his opponent, Sen. Perdue, repeatedly, calling him out for not showing “any spine” and claiming Purdue is one of the “most notoriously corrupt self-dealing politicians in America.”He also called on Perdue to acknowledge the results of the 2020 election.”I think that Senator Perdue is going to need to make a decision pretty quickly. Is he going to continue to indulge this temper tantrum that the president’s throwing and go down with the ship, or is he going to assert any measure of independence he’s failed for the last four years to show any spine to ever break with this president,” Ossoff said.As Ossoff pressured Perdue to accept the election results, the incumbent senator released a joint statement with Loeffler, attacking his fellow Republican and secretary of state, Brad Raffensperger. Loeffler and Perdue accused Raffensperfer of “mismanagement and lack of transparency” with the election and asked him to resign. Raffensperger and the secretary of state’s office maintained that only legal votes were counted and that no widespread fraud was detected.When asked about Purdue and Loeffler calling for Raffensperfer to resign, Ossoff credited Abrams for the reforms in voting in the state of Georgia.“I think that Georgia election officials, over the last 10 years have faced warranted criticism for voter suppression and the work of people like Stacey Abrams has secured valid access for hundreds of thousands of Georgians who might otherwise not have been able to participate in elections. Stacey Abrams deserves the lion’s share of the credit for enhancing access to the franchise and defending the sacred right to vote here in Georgia,” Ossoff said.