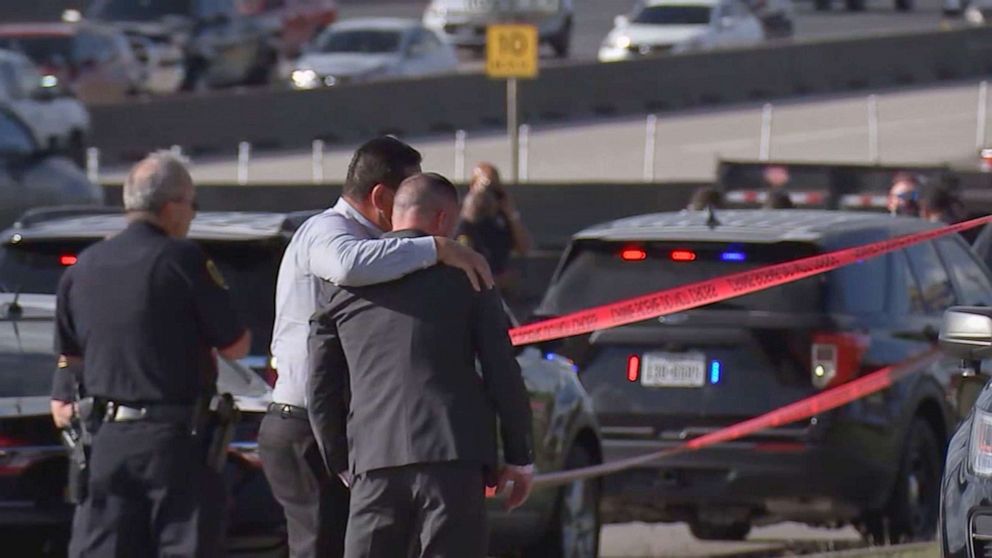 By BILL HUTCHINSON, ABC News(HOUSTON) — A suspect was arrested Tuesday afternoon in the fatal shooting of a Houston police sergeant, as mournful colleagues marked the fourth Houston officer killed in the line of duty since December and the second gunned down in just the past three weeks.The slain officer was identified as 47-year-old Sgt. Sean Rios, a married father of four and a 25-year veteran of the Houston Police Department, officials said.”This is a tragic case and it’s just been a very rough year in our city,” Houston Mayor Sylvester Turner said at a news conference.Houston police Chief Art Acevedo announced Tuesday afternoon on Twitter that a suspect in Rios’ death had been arrested.”We can all breath a sigh of relief,” Acevedo tweeted.The suspect’s name was not immediately released. Police have scheduled a press conference for Tuesday evening.Rios is the 43rd U.S. law enforcement officer feloniously killed in the line of duty this year, which represents a 19% increase over the same period in 2019, according to preliminary statistics from the FBI. Eight of those officers have died as the result of being ambushed, according to the FBI.In all of 2019, a total of 48 U.S. law enforcement officers were feloniously killed, including 36 who were shot to death, FBI statistics show.Acevedo said Monday’s shooting occurred as Rios was driving to work. Rios was assigned to George Bush International Airport and was scheduled to begin his shift there at 2 p.m., Acevedo said.At about 1:30 p.m., Rios, who was still in street clothes, got into a gunfight “for some unknown reason” with at least one gunman, possibly two, Acevedo said.After being shot multiple times, Rios ran to a nearby motel and collapsed, Acevedo said. He was pronounced dead at the scene.Siddharth Gandhi, manager at the Taj Inn & Suites, told Houston ABC station KTRK that he heard four gunshots before Rios staggered into his motel’s office, covered in blood. Rios asked employees to call 911 then fell to the floor, Gandhi said.Chief Acevedo said investigators believe the suspect and a possible accomplice were in separate vehicles: a black pickup truck and a blue Mercedes-Benz. He said the Mercedes was later found abandoned.Gandhi said that while his motel security cameras captured the mortally wounded Rios running into his office, they did not record the shooting or the vehicles the suspect sped away in.Prior to announcing an arrest on Tuesday, Acevedo sent a message to Rios’ killer, saying, “We are coming after you. We’re going to capture you. So, do yourself a favor and turn yourself in.”He warned that anyone harboring the suspect or suspects would be prosecuted.Besides four children, ages 17, 14, 12 and 9, Rios is survived by his wife, parents and brother, as well as two cousins who are Houston police detectives, Acevedo said.”Please pray for Rios’ family, for his extended HPD family and for this community,” Acevedo said.Rios’ death follows the Oct. 20 death of Houston Police Sgt. Harold Preston, 65, who was shot multiple time while answering a domestic violence call.Elmer Manzano, 51, was arrested and charged with capital murder of a police officer and attempted capital murder of a police officer in Preston’s death and for wounding another officer who responded to the call after Manzano allegedly shot his 14-year-old son. Manzano, who was shot in the stomach during the confrontation, has yet to enter a plea to the charges.Houston police officer Jason Knox, 35, was killed on May 2 when his police helicopter crashed into a building in Houston.Last Dec. 7, Houston Police Sgt. Christopher Brewster, 32, was shot and killed while responding to a domestic violence call. The suspect in the shooting, Arturo Solis, 25, has pleaded not guilty to a charge of capital murder of a police officer.In addition to the four Houston police officers killed in the line of duty in the last 12 months, Lemuel Bruce, a veteran arson investigator for the Houston Fire Department, was shot to death on Oct. 16, 2020, while conducting surveillance in a string of arson fires, officials said. After shooting Bruce, the suspect, Joshua De La Cerda, died by suicide, police said.Copyright © 2020, ABC Audio. All rights reserved.