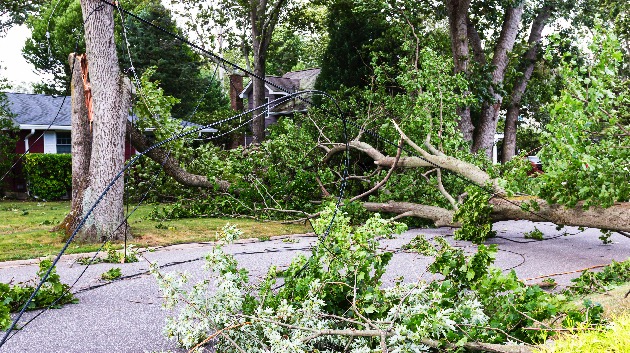 By JULIA JACOBO, ABC News(NEW YORK) — Climate change is slowing the weakening of hurricanes after they make landfall from the North Atlantic, which could result in more destruction for areas further inland, according to a new study.Hurricane storm systems, which derive their power from the moisture in open seas, typically “decay rapidly” once hitting land, and the damage is largely confined to coastal areas, according to the study, published in Nature on Wednesday.When a hurricane first makes landfall, the center of the storm is over land, but about half of the system is still over the ocean, which allows the moisture supply to persist until the storm is completely over land, typically about 3.5 hours later.However, the study’s findings suggest that warmer seas are allowing storm systems to hold more moisture, even after they make landfall, slowing the rate at which they dissipate.”The maximum intensity the hurricane can achieve over its lifestyle” is expected to increase as the world warms and storm systems collect more moisture, according to the scientists.The researchers analyzed data from hurricanes that made landfall in the North Atlantic from 1967 to 2018 and found the extent of hurricane decay has declined in correlation with a rise in sea temperatures.According to the data, storms that made landfall in 1960 likely would decay by 75% within a day of hitting land, while hurricanes today only weaken by about 50% within a day of landfall.The timescale of decay after hitting land has also nearly doubled over the past half century, from 17 hours to 33 hours.More inland areas typically less prepared for such storms could find themselves at greater risk, the authors noted.Copyright © 2020, ABC Audio. All rights reserved.