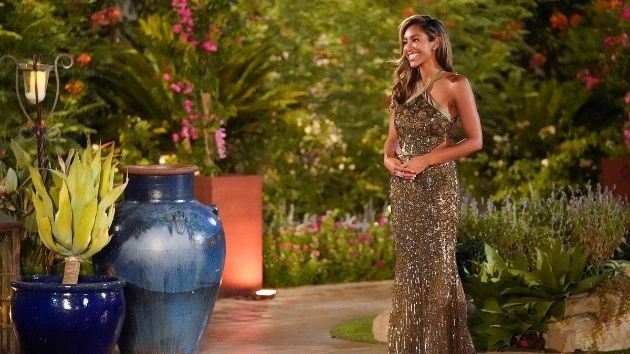 (LOS ANGELES) — On Tuesday’s episode of The Bachelorette, Tayshia Adams, a fan favorite from past seasons of The Bachelor and Bachelor in Paradise, finally arrived at the villa… and she had company.

The episode opened with Tayshia meeting the 16 remaining men for the first time, but just as they were getting to know each other, host Chris Harrison pulled her away to announce that “everything is about to change.”

Spencer’s opening line to the men, “Which one of you guys scared off Clare?” didn’t go over well with the guys, and they became all the angrier when he immediately pulled Tayshia aside for some one-on-one time. She felt differently, and gave him the first impression rose.

The first group date went to Blake, Riley, Zac, Jordan, Noah, Peter, Kenny, Jay, Eazy and Spencer, who joined Tayshia poolside before being divided into two teams to compete in a game of “splashball” while wearing tiny speedos.  The winners earned more time with Tayshia while the losers were sent back to the villa.

The competition was intense, especially between Riley and Spencer, the latter of whom ended up with a bloody lip. The pain was worth it though, as Spencer — along with Noah, Zac, Kenny and Eazy — were victorious in the end. Eazy scored a double win by also walking away with the group date rose.

Meanwhile, Jason continued to struggle with his feelings for Clare and announced that he was going home.

A one-on-one date went to Brandan, who, while excited about the chance to deepen his connection with Tayshia, worried that his prior failed marriage might ruin his chances with her. He was relieved to learn that she, too, went through a divorce, which allowed them to bond over their shared pasts. He not only earned the date rose, but Tayshia even gushed to the camera that she could see herself marrying the 30-year-old roofer from Milford, Massachusetts.

The episode also featured Clare Crawley and Dale Moss sitting down with Harrison for their first interview since getting engaged, where they discussed their whirlwind romance that shocked Bachelor Nation.  The two also cleared the air regarding several rumors swirling around them.

The biggest the two shot down was the report that the two contacted each other prior to filming.

“One hundred percent no,” said Clare. “And I can whole heartedly attest to this on my dad’s grave, there was never ever a single ounce of contact, communication through friends through outlets, through telephone, through any sort of source, through anything.”

Dale echoed Clare’s comments, adding that he didn’t even ask for her number until they left to go home.

The Bachelorette returns Tuesday at 8 p.m. ET on ABC.