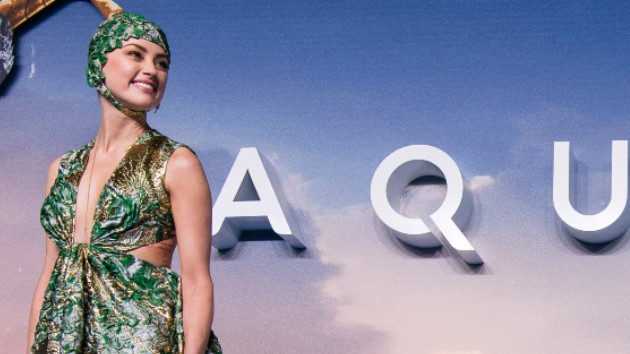 (LOS ANGELES) — Following Johnny Depp’s forced exit from Fantastic Beasts 3 after being handed a defeat in his libel case against the U.K. tabloid The Sun, his ex-wife Amber Heard is denying rumors that she is being replaced as warrior Mera in the planned sequel to the 2018 film Aquaman.

The news comes as a Change.org petition to replace her reached more than 1.1 million signatures and counting over an alleged “pattern of abuse” she demonstrated towards Depp and another domestic partner.

“I’m super excited about the amount of fan love and the amount of fan appreciation that Aquaman has acquired and that it has garnered so much excitement for Aquaman and Mera that it means we’ll be coming back,” Heard tells Entertainment Weekly. “I’m so excited to film that.”

Depp’s suit stemmed from an article that was published April 27, 2018 that branded the 57-year-old actor a “wife beater” during his messy marriage to Heard. Depp has maintained his innocence and said he plans to appeal the decision.

Depp insists it was Heard who got physical with him, punching him repeatedly and at one point cutting off the tip of his finger with a thrown vodka bottle.

Heard, 34, claims that she has lost work due to speaking out against sexual violence.  She wrote in a 2018 op-ed for the Washington Post, “A movie I was attached to recast my role. I had just shot a two-year campaign as the face of a global fashion brand, and the company dropped me.”

Heard will next be seen in a series adaptation of Stephen King’s novel The Stand, premiering December 17 on CBS All Access.