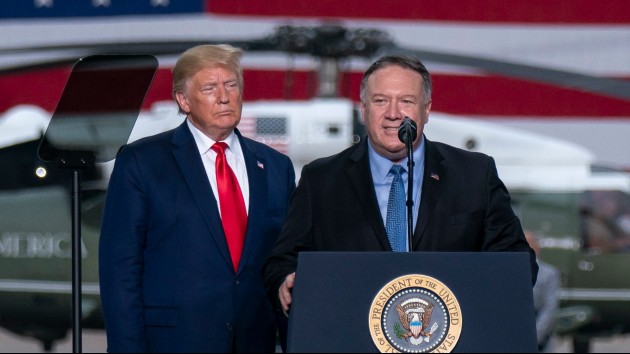 By GUY DAVIES, ABC News(LONDON) — During a press conference Tuesday, Secretary of State Mike Pompeo was asked if the State Department was engaged with the incoming administration of former Vice President Joe Biden.With traces of a smile across his face, Secretary of State Mike Pompeo, who has frequently called on foreign governments to respect the results of democratic elections abroad, gave an answer that some considered shocking.”There will be a smooth transition to a second Trump administration,” said Pompeo, one of President Donald Trump’s most loyal aides.

It was unclear whether the comment was ironic, but he reiterated his position in an interview with Fox News later that day, saying of the numerous foreign leaders who had congratulated President-elect Joe Biden: “If they’re just saying hi, I suppose that’s not too terribly difficult. But make no mistake about it, we have one president, one secretary of state, one national security team at a time.”Pompeo was one of the most prominent Trump team members and government officials to deny Biden’s electoral win, which was projected by several news organizations Saturday, after an apparent win in Pennsylvania gave him more than 270 electoral votes. While the vote has not been certified, Biden has a lead of thousands of votes in several key states and is ahead of Trump by some five million votes nationwide.And while Trump and his allies have made numerous claims of election fraud, those claims have not been substantiated and critics doubt anything found would be enough to overturn the result. On top of that, Trump has a long history of calling elections “rigged,” as revealed by ABC News this week, despite there being no evidence of mass voter fraud.Now, with Pompeo continuing to back Trump and casting doubt on the election results, he appears to be undercutting confidence in American democracy and the standing of the U.S. to promote its longstanding policy of urging that free and fair elections are respected abroad, critics said.‘Shocking’His comments contrasted, for example, with a recent statement issued prior to a series of elections across Africa, when he said “We will watch closely the actions of individuals who interfere in the democratic process,” and “The conduct of elections is important not only for Africans, but also for defenders of democracy around the world.”After the presidential election in Cote D’Ivoire, in West Africa, the U.S. Embassy in Abidjan said in a statement: “The United States calls on Cote d’Ivoire’s leaders to show commitment to the democratic process and the rule of law. We urge all parties, groups, and individuals to engage in inclusive dialogue to find peaceful solutions to their disagreements and to heal national divisions. Grievances related to the presidential election should be resolved peacefully and transparently through legal processes.”Pompeo’s statement was met with immediate accusations of hypocrisy on social media.

Ethel Cofie, a technology entrepreneur from neighboring Ghana, who was a part of the State Department’s Young African Leaders Initiative, responded by tweeting: “Listen America lost the moral right to say this to anyone anymore…”Pompeo repeatedly dismissed any contradictions between his comments on the U.S. election and statements on those taking place abroad during his Tuesday press conference, but experts consulted by ABC News have warned that the current internecine strife in Washington may damage America’s standing in the world in the months and years to come.“It’s quite frankly shocking,” Leslie Vinjamuri, the leader of the U.S. & Americas program at Chatham House, a think tank based in London, told ABC News. “Inappropriate is understating it, the significance of the secretary of state making that kind of comment. It really threatens to undermine the stability of this transition, which is desperately needed given the catastrophic numbers of deaths and infections in the United States right now.”The significance of Pompeo’s comments, according to Barry Pavel, a senior vice president at the Atlantic Council and director of the Snowcroft Center for Strategy and Security, is more than just symbolic. They may undermine the United States’ relations with other countries, and the promotion of democracy — a hallmark of U.S. foreign policy — in the future.“Who knows if it was a joke or serious? Either way, it’s not good,” said Pavel. “U.S. influence in the world is partly about the power tools that we wield — economic and military — but it’s also about the model of how we organize our society and our polity … that kind of comment by someone who oversees relations [abroad] is not helpful at all.”Pompeo has not only called into question the validity of the election results, he’s also prevented the agency from supporting the Biden transition so far. Two State Department sources have confirmed to ABC News that there is no guidance, as of yet, to diplomatic posts abroad on how to discuss the election results, with one of the sources saying that messages from other world leaders congratulating Biden would not be passed on.‘Russia is loving this’Amidst the stalemate gripping Washington, foreign leaders have largely stayed quiet until the weekend when Biden was projected to be the winner, with congratulatory messages pouring in then. Significantly, the major countries who have not yet made a substantive comment on the election fallout are some of the United States’ main rivals: North Korea and Russia.“Comments like that, if they continue, really make things more difficult for Americans and for America … Russia is loving this, China, the rising power, this is a gift to them in many ways,” Pavel said.One area, however, where Pompeo has been particularly vociferous in supporting pro-democracy protests has been Hong Kong.This week, Hong Kong’s central government disqualified four lawmakers it deemed unpatriotic, leading to the resignation en masse of the remaining pro-democracy members of its legislative council. After fierce U.S. criticism of the move, the state-owned tabloid Global Times fired back: “Look at Pompeo’s bloated ego. He is about to lose his job, but is still trying to meddle in Xinjiang and Hong Kong affairs. He’d better work on the U.S. itself.”As countries from China to Cameroon, Hungary to Honduras clamp down on human rights, Trump and Pompeo’s words are fuel for a global backsliding in democracy, said Pavel.

“It’s a dangerous time to be further diminishing the model of democracy, versus authoritarian systems,” Pavel said. “Our soft power is taking a long term hit. We’re digging ourselves in a hole. It’s really time to stop digging.”Despite Biden’s calls for unity going forward, the outgoing administration’s continual undermining of the validity of the election results could have an impact on how the U.S. conducts itself abroad even after the transition has taken place, Pavel said.”I’m also worried about the activity after January 21,” he warned. “I think once things settle and clarify, I’m worried about [the] continuing use of a megaphone from the sidelines, that continues to undermine our legitimacy, influence and soft power in the world.”Copyright © 2020, ABC Audio. All rights reserved.