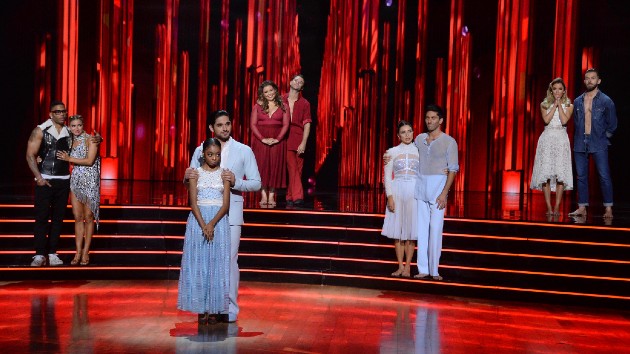 (LOS ANGELES) — The stakes were the highest they’ve ever been on Monday night’s Dancing with the Stars as the competitors stared down the scariest hurdle that stood between them and the finals — a surprise double elimination.  Unfortunately, despite bringing the judges to their feet, the audience voted to send Johnny Weir and Skai Jackson home.

Monday night’s bottom three proved to be the most heartbreaking of all, with Carrie Ann Inaba even stalling for time in hopes of saving everyone.  Unfortunately, the audience had spoken and the judges unanimously agreed to save Justina Machado, who was also sent to the bottom three, due to her consistent performances and steady improvement.

Host Tyra Banks pointed out that, while it was immensely disappointing that Jackson and Weir would be unable to compete in the finals, they left the season on a high note by finishing with their highest scores and accomplishing their best performances of the season.

All the competitors were ready to meet the night’s challenges on Monday. For the first of the two dances everyone had to master, competitors were tasked to revisit their weakest routine of the season in the redemption round.  Much to the judges’ enthusiastic delight, everyone seamlessly rose to the challenge.

One such competitor was Catfish host Nev Schulman, who blew the foxtrot he performed in the first episode of the season by a 10 point margin by finishing with another perfect score of 30 out of 30.  All three judges jumped out of their chairs and marveled over how much Schulman has grown as a dancer, which made it all the easier for them to award him a second perfect score for his contemporary, allowing him to finish the night with an unbeatable 60 out of 60.

Another star that amazed the judges and joined Schulman atop the leaderboard with her own perfect score was The Bachlorette’s Kaitlyn Bristowe.  The 35-year-old was first challenged to redeem her old Paso Doble routine and truly revel in the drama of the passionate dance, to which she smirked, “No one’s ever told me to have more drama!”

Later, with her emotional contemporary to The Chicks‘ “Cowboy Take Me Away” in honor of her childhood best friend who was tragically killed in a car crash at 18, Bristowe easily earned another set of straight 10s, pushing her final score to 60 out of 60.

One Day at a Time star Justina Machado electrified the judges in her redemption round, dancing the tango to Moulin Rouge’s “El Tango De Roxanne,” where she ironed out every flaw judge Bruno Tonioli brought to her attention during rehearsals.  For her second routine, the actress fully embraced her softer side with a tender contemporary to “Holding Out for a Hero,” of which she dedicated to her dance partner, Sasha Farber.  She left judge Derek Hough speechless and finished the night in second place — earning a final score of 58 out of 60.

Rapper Nelly also accomplished his best scores, rising above the challenges of the Paso Doble while making both Derek and Bruno blush thanks to the “Ride Wit Me” artist flaunting his sculpted physique by dancing shirtless.  However, it’s his jive that truly pushed him over the edge, which was full of pizazz and humor that truly became the Grammy Award winner’s breakout performance.  He finished the night with a 56 out of 60.

Carrie Ann remarked at the conclusion of the final round that she has “never ever seen dancing at this level, ever!”

Next week is the finals and only one dancer will win the Mirror Ball Trophy.  Of course, the rule book will be thrown out and the four finalists will have full creative freedom over their respective freestyle routines.

In addition to Derek Hough returning to the ballroom floor for a special performance, Nelly will also take the stage to perform a medley of his greatest hits.  However, as Tyra Banks teased in the final seconds of the night’s show, there will be plenty surprises, as well!

Dancing with the Stars returns for its season finale next Monday at 8 p.m. ET on ABC.

Here are your finalists of Dancing with the Stars season 29:Nev Schulman, host of Catfish, with Jenna Johnson — 60/60Kaitlyn Bristowe, former star of The Bachelorette, with Artem Chigvintsev — 60/60Justina Machado, One Day at a Time star, with Sasha Farber — 58/60Nelly, Grammy Award-winning rapper, with Daniella Karagach — 56/60