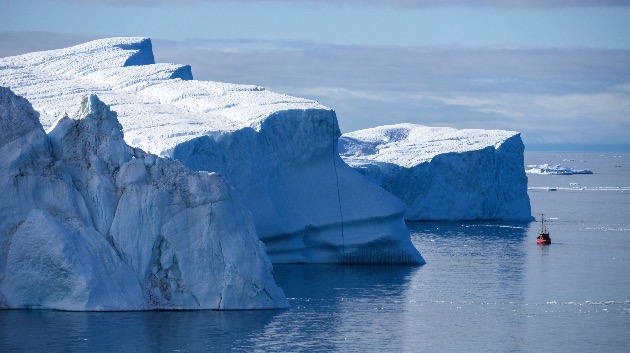 By JULIA JACOBO, ABC News(NEW YORK) — Greenland is known as the largest contributor to rising sea levels but a new study explores how the island’s glaciers could lose more ice than previously predicted.The three largest glaciers, Jakobshavn Isbræ, Kangerlussuaq and Helheim, are responsible for about 12% of the entire ice sheet and hold enough ice to raise sea levels by around 1.3 meters, or about 4.3 feet, according to the study published Tuesday in Nature.Together, the three glaciers have already contributed about 8.1 millimeters or .32 inches to global sea levels between 1880 and 2012, the authors of the study said. They used historical photographs to calculate the amount of ice lost during that time frame.If drastic efforts are not made to cut global greenhouse gas emissions, climate change models predict that Earth’s temperature will rise 3.7 degrees Celsius above pre-industrial revolution temperatures by the end of the century.The world’s surface temperature has increased a little more than 1 degrees Celsius since 1880, according to NASA. The goal of the Paris Agreement is to keep that rise below 2 degrees Celsius, but scientists have determined that the combination of pledges from each participating nation is still not enough to mitigate the rise in temperature.The rate of ice loss in Greenland has increased over the past decade and models predict a further acceleration over the coming decades, according to the study. Jakobshavn Isbræ and Kangerlussuaq glaciers have gone through “periods of dynamic instability” and are sensitive to small fluctuations in atmosphere or ocean warming, the study said. Scientists expect them to continue to retreat and lose mass.Globally, sea levels have risen an average of 17 centimeters or about 6.7 inches in the 20th century due to loss of land-based ice mass, thermal expansion of oceans and changes in terrestrial water storage, according to the study. That number could increase up to 2 meters or 6.56 feet by 2100.Greenland’s ice sheet is a major contributor to rising sea levels. The melting could eventually expose up to 400 million people to flooding by the end of the century, according to a study commissioned by NASA and the European Space Agency and published in Nature last year.Warming events are becoming much more frequent, climate scientists told ABC News last year after unusual warming patterns caused the Greenland ice sheet to melt at near record rates. In September, a chunk of Greenland’s ice cap measuring 42.3 square miles in the far northeastern Arctic broke off, which provided more evidence to scientists of the rapid rate at which Earth’s temperature is rising.Copyright © 2020, ABC Audio. All rights reserved.