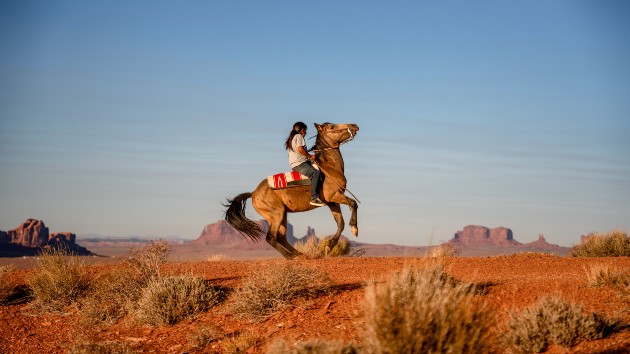 By MARIYA MOSELEY, ABC News(NEW YORK) — Joe Biden and Kamala Harris’ win was a welcome surprise to one Native American man, whose celebratory dance moves have gone viral amid Native American Heritage Month.Ashkia Randy Trujillo of Ohkay Owingeh, New Mexico, jumped out of his truck and performed a Native American dance after it became apparent that the former vice president had ousted President Donald Trump by securing the necessary 270 electoral votes.The 26-year-old Navajo and Tewa man was driving alongside his niece when he got the news surrounded by a parade of cheering drivers who were screaming and honking from their vehicles. Then, once he saw the New Mexico state flag beaming from his rear view mirror, he decided to express his joy while also paying tribute to his heritage.”The New Mexico state flag is actually a Native American symbol, and that symbol represents the sun. …To me, seeing that flag waving represented the coming of a new day, a new sun, a new light,” Trujillo told ABC News.

A Native American dances in the street along with other individuals in Albuquerque NM pic.twitter.com/LeN7m9Ig89

The 21-second clip of him dancing, which has since garnered over five million views on Twitter, was captured in Albuquerque, New Mexico, by photojournalism student Sharon Chischilly. She was in the area photographing the community’s reaction to the election results when she caught sight of Trujillo.The viral moment has fueled activists across social media to highlight how a record-high voter turnout among Indigenous populations played a major role in key swing states, especially in Arizona and Wisconsin, where slim margins helped tip the scale in Democrats’ favor.”Throughout history, we’ve always been fighting to have a voice and most of the time, it’s fallen on deaf ears,” Trujillo said. “We’re making the changes that we want to see.”Trujillo, a shift manager at a New Mexico restaurant and father of two, said that he’s grateful for a shift in leadership, as, in his eyes, his community has endured a turbulent four years under the Trump administration.One of his many frustrations with Trump is how his administration has responded to the ongoing COVID-19 pandemic, which has taken over 240,000 American lives. The Navajo Nation, which spans across areas in Arizona, New Mexico and Utah, has been disproportionately impacted by the coronavirus and was even a hot spot for the virus earlier this year.According to The Center for Public Integrity, COVID-19 contributed to the number of barriers that tribal communities faced when casting their ballots; other issues included limited public transportation options, high poverty rates, delayed and/or limited U.S. Postal Service delivery service and voter registration/ID laws that do not recognize non-traditional addresses on tribal land.Additionally, U.S. Census data reveals that over a quarter of citizens in over 150 Indigenous communities do not have access to a car.VoteAmerica, a nonprofit organization that has registered over 20 million voters nationwide, was founded by a team of elections and technology experts that specifically help register groups that are often ignored, such as African Americans, Indigenous people and young voters.”A lot of reservations and native groups … suffer from the same problems that much of rural Americans suffers from, which is a lack of infrastructure,” VoteAmerica Chief of Staff Jordan James Harvill told ABC News.Harvill said that traveling to the polls is among one of the major barriers that the community faces, with some people from the Navajo Nation commuting up to a 100 miles to get to their closest polling center.Among the efforts to get people from the Navajo Nation registered to vote this year were local groups hosting horseback rides. Allie Young, the co-founder of Protect the Sacred, is a 30-year-old activist who has been leading efforts through an initiative titled “Ride to the Polls.””We rode in honor of our ancestors who fought for our right to vote. We rode in honor of our ancestors who rode longer miles and hours just to exercise their right to vote for us,” Young’s group wrote about the effort on Instagram.In 1924, The Indian Citizenship Act was enacted by Congress, which granted citizenship to all Native Americans born in the U.S.The right to vote, however, wasn’t governed by state law until 1957, with some states still barring Native Americans from voting. They community faced obstacles similar to those Black Americans faced, until the passage of the Civil Rights Act of 1965 was passed, according to The National Constitution Center.Harvill, who works on special projects for VoteAmerica, believes that Native people have felt “invisible” for too long and are finally being given a long-overdue recognition for being an instrumental part of the population.”There has been decades of work done by community members on the ground to build the political infrastructure for Native turnout and now we’re starting to see it in 2020,” Harvill said. “We are going to see this power continue to build.”Trujillo said that he’s proud of his community after all the hurdles they’ve overcome, with this moment only reigniting his hopes for a better future.”This shows the world … that even though we’ve been pushed down … we still decided to get back up, we still decided to rise,” Trujillo said.Copyright © 2020, ABC Audio. All rights reserved.