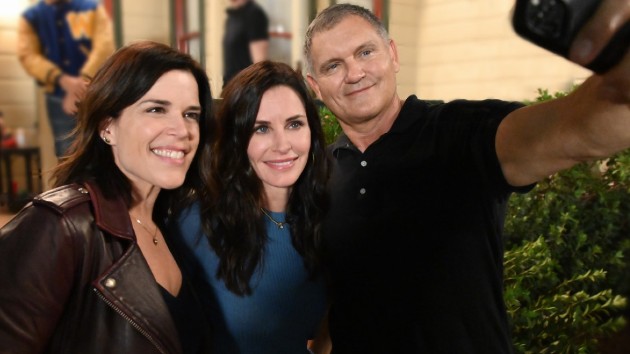 (LOS ANGELES) — Franchise creator Kevin Williamson posted to Instagram a photo announcing that shooting has finished on the new film that re-united the (surviving) characters from his original 1996 hit movie, Scream.

Oh, and the fifth movie in the series is officially titled Scream, according to the movie’s “clapper,” which executive producer Williamson is holding in the photo. Naturally, someone in that now-iconic Edvard Munch-inspired Scream mask is sneaking up behind him with a bloody knife in the pic.

“Nearly 25 years ago, when I wrote Scream and Wes Craven brought it to life, I could not have imagined the lasting impact it would have on you, the fans,” Williamson writes in the caption, honoring the first film’s late director. “I’m excited for you to return to Woodsboro and get really scared again.”

“I believe Wes would’ve been so proud of the film,” Williamson continues, giving a shout-out to the movie’s returning players Neve Campbell, Courteney Cox, David Arquette and Marley Shelton, as well as “an incredible cast of newcomers” that includes The Boys’ Jack Quaid.

“I’m thrilled to be reunited with Neve, Courteney, David and Marley, and to be working alongside a new filmmaking team and incredible cast of newcomers.. to continue Wes’ legacy with the upcoming relaunch of the franchise that I hold so dear to my heart,” says Williamson.

Matt Bettinelli-Olpin and Tyler Gillett are directing this time around. The pair previously collaborated on 2019’s hide-and-seek horror hit Ready Or Not.