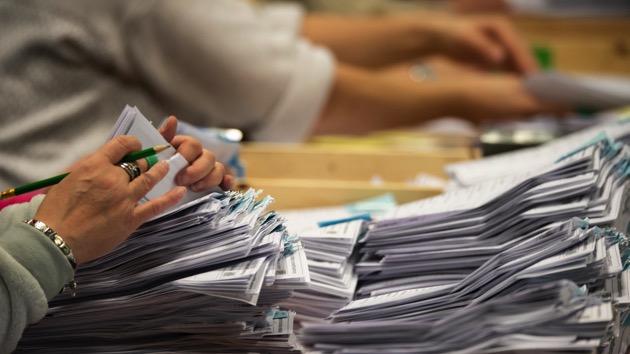 By CHEYENNE HASLETT, ABC News(MADISON, Wis.) — The Wisconsin Elections Commission announced Wednesday it had received $3 million from the Trump campaign, expecting the money is meant to pay for some level of recount the campaign will petition for later in the day.The Trump campaign also is expected to put out an update soon, according to sources familiar with the matter.”The Wisconsin Elections Commission has received a wire transfer from the Trump campaign for $3 million. No petition has been received yet, but the Trump campaign has told WEC staff one will be filed today. We have no further information at this time,” the commission said in a statement.The deadline to file the petition and the check is 5 p.m. local time Wednesday, 6 p.m. ET. The cost of a total, statewide recount has been estimated at $7.9 million, so unless the Trump campaign sends more money before the deadline, it would be able to request only a partial recount in select counties.ABC News has projected that former Vice President Joe Biden won Wisconsin by more than 20,000 votes, helping him become president-elect.Wisconsin does not have automatic recounts, even if the unofficial results are extremely close, according to the commission, and because the margin is more than 0.25%, the aggrieved candidate must prepay the estimated costs of the recount at the time a request is made.In the case of a partial recount, the Trump campaign could then raise concerns with certain ballots in the counties where they request recounts, using them as a basis for legal action once the recount concludes on Dec. 1.Some of the biggest cost estimates came from Dane County, the state’s second largest, which estimated it to be $740,000, Waukesha County, which estimated $653,400, and Brown County, home to Green Bay, which estimated the cost at $456,925. Milwaukee County, the largest county, had the highest estimate: $2.04 million.Smaller, more rural counties are less expensive.”There are only three statewide contests in the last half century in which recounts changed the outcome: the 1974 New Hampshire Senate race, the 2004 Washington governor’s contest, and the 2008 Minnesota Senate election,” Karl Rove, a senior adviser and deputy chief of staff during the George W. Bush administration, wrote in op-ed in the Wall Street Journal last week. “The candidates in these races were separated, respectively, by 355, 261, and 215 votes after Election Day.”The Trump campaign, as a part of its strategy to question election results, has filed numerous lawsuits. President Donald Trump has yet to concede, and he continues to claim, without evidence, that there was widespread voter fraud in the 2020 election.Copyright © 2020, ABC Audio. All rights reserved.