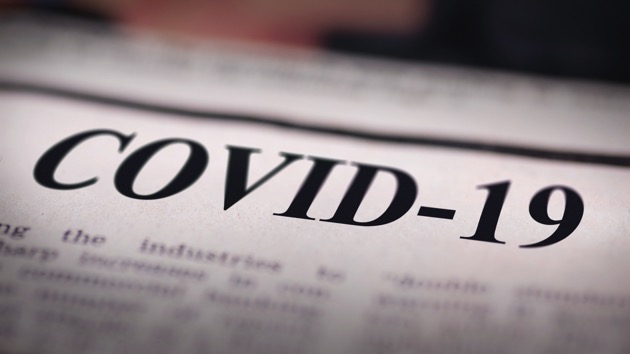 By ERIN SCHUMAKER and MARK NICHOLS, ABC News(NEW YORK) — A South Dakota doctor is moonlighting as a newspaper columnist, urging readers to protect themselves against the virus that killed both his parents.The sheriff in a Kansas town is fighting for his life in a Denver hospital he was sent to for critical care.In Georgia, a minister who now leads up to three COVID-19 funerals a day dreads his phone’s ringer, announcing more death.On Thursday, the United States crossed a tragic threshold, marking at least 250,537 American lives lost to COVID-19 since the pandemic’s start, according to Johns Hopkins University. After nine months of numbers, it’s hard to conceptualize the immense tragedy behind that figure. But we should try.A quarter million dead.In different terms, as Dr. Jorge Caballero, a clinical instructor at Stanford Medicine, explained, our current outbreak trajectory is expected to bring the American death toll to 300,000 in less than a month.”That’s as if you took the entire population of St. Louis, Missouri and wiped it off the map,” Caballero said.As the virus has ripped across the country, from densely populated cities on the coasts to the Sun Belt and back up to the heartland, the face of the pandemic has shifted.Today, rural America is caught squarely in the virus’ crosshairs and the impact of the virus is much more widespread than it was in the spring.As a proportion of the population, rural counties were always experiencing a disproportionately high death toll. A cluster of deaths at a nursing home in a small town has a different effect, statistically and personally, then it does in a large city. But what’s changed since the early pandemic is the number of counties that have lost residents to the virus.To better understand who is dying from COVID-19 in America and where they live, ABC News analyzed U.S. counties with the highest COVID-19 death rates per capita — a metric used by researchers at Johns Hopkins University of Medicine and the Centers for Disease Control and Prevention (CDC) to measure COVID-19 data. Within four weeks of the first reported death on Feb. 29 in Washington State, 2.3% of the United States’s 3,142 counties were averaging at least one COVID-19 death each week. By the week ending Nov. 13, 26.6% of U.S. counties saw at least one weekly death from the virus.As the pandemic has evolved and spread, those counties are increasingly rural, ABC News found, with the poorest counties that have the fewest health resources bearing the brunt of the burden.”Rural is older, sicker and poorer,” Alan Morgan, CEO of the National Rural Health Association, explained. “There’s a higher percentage of people with multiple chronic issues and comorbidities,” he said.”If you throw in that they have the fewest options available for seeking care, it’s the worst possible public health setup you could imagine.”The face of COVID-19 death in America is changingAs the first eight months of the U.S. outbreak unfolded, striking disparities emerged.In addition to having higher rates of infections, counties with majority non-white populations experienced COVID-19 death rates at least three times higher than the death rates in counties in which less than 10% of the population was non-white.Then in recent months came an explosion of cases in the upper Midwest and Plains states, where most of the population is mostly white, causing deaths to increase at a higher rate in white counties and the disparity between non-white and white death rates to narrow.While it’s tempting to view the narrowing gap between Black and white deaths as a sign that COVID-19 racial disparities are improving, that’s likely a false narrative, according to Theresa Chapple-McGruder, a Washington D.C.-area epidemiologist.Coronavirus outbreak sparks global health emergency“We’re seeing more of a regional shift than a racial shift,” Chapple-McGruder said.Black and Hispanic people in the U.S. are still disproportionately dying of COVID-19. Black people in the United States were 2.1 times more likely to die from COVID-19 than white people were, according to a CDC report published in August. Hispanic people were 1.1 times more likely to die from the virus.Where people live in the U.S. is highly segregated by race and deaths are currently spiking in areas with very low rates of Black and Hispanic residents, Chapple-McGruder noted.The COVID-19 death rate was highest in the Northeast counties over the past nine months, but in mid-summer, the death rate in Southern counties rose by double digits. In the past four weeks, the biggest regional jump in deaths was in Midwestern counties.”Even in places where we’re not seeing the insane peaks that we’re seeing in the middle of the country, Black and Hispanic people are still overrepresented in the number of cases,” Chapple-McGruder said. “Where Black and Hispanic people live, they are going to carry the highest burden.”Terrell County, Georgia, for instance, has four funeral homes, no hospital and one of the worst COVID death rates in the nation. In a place with just 9,000 residents, most of whom are Black and poor, 33 people have died of the coronavirus. Terrell County’s COVID-19 death rate of 383 per 100,000 residents is four times higher than Georgia’s overall rate of 80 per 100,000.Rev. William Weston Sr. has buried many of them.If you thumb through obituaries in Dawson, Terrell’s biggest town, you’d be hard-pressed to find a funeral that doesn’t mention Weston officiating. Throughout the pandemic, he led back-to-back funerals, on several Saturdays two or more. Before a graveside service where he was to eulogize a married couple from his congregation, his phone rang in his pocket.”For a good couple of months or so, every time I got a call, someone had passed,” Weston said. This time the virus struck close to home. The voice on the other end of the line told Weston that his first cousin had died of COVID-19.When Weston celebrates 17 years as the senior pastor of Sardis Baptist Church next month, it will be the first time his cousin won’t be seated in the pew to join in.”This town was shattered,” Weston said of the unrelenting deaths.

How communities with low vaccination rates face costs beyond the virus

Minorities are bearing the brunt of monkeypox cases in the US: CDC

The future of COVID vaccines could be sprays, not shots