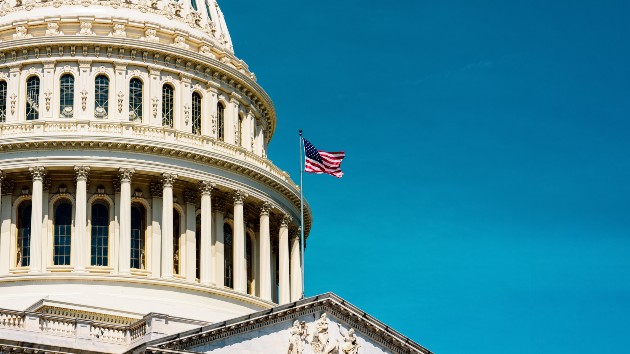 By ALLISON PECORIN and LAUREN LANTRY, ABC News(WASHINGTON) — In a rare instance of breaking ranks, GOP senators on Wednesday roundly criticized President Donald Trump’s firing of Chris Krebs, a top election security official who publicly contradicted his claims of voting fraud.”I thought this was a terrible mistake,” said Sen. Susan Collins, R-Maine said.Krebs, a political appointee as head of the Department of Homeland Security’s cybersecurity agency, was highly respected on both sides the political aisle.His dismissal came after he tweeted that the 2020 election was “the most secure election in American history.””I don’t agree with it,” Sen. Shelley Moore Capito, R-W.Va., told reporters. “I think he’s kept us very well informed. He’s been very professional.””I was very disappointed when I found out that he had been terminated,” said Sen. Mike Rounds of South Dakota.Sen. John Cornyn, R-Texas, who frequently defends Trump, said while the president has the right to choose his own people, firing Krebs “adds to the confusion and chaos.”Sen. Ben Sasse of Nebraska was the first Republican to publicly criticize the president’s move, doing so in a statement Tuesday night.”Chris Krebs did a really good job — as state election officials all across the nation will tell you — and he obviously should not be fired,” Sasse said in a statement. “I’m particularly grateful for the work he did on the Cyber Solarium Commission to help the nation prepare for the future of war.”Trump’s decision to fire Krebs has been criticized as sowing additional mistrust in the election as the president continues to push unfounded theories challenging the legitimacy of the Nov. 3 contest.”The recent statement by Chris Krebs on the security of the 2020 Election was highly inaccurate, in that there were massive improprieties and fraud…” Trump tweeted, without providing evidence. “Therefore, effective immediately, Chris Krebs has been terminated as Director of the Cybersecurity and Infrastructure Security Agency.”Twitter has since labeled the tweet with a warning, saying the president’s claims are disputed.Krebs’ firing immediately outraged Democrats, who issued statements Tuesday evening defending Krebs’ credibility.”Director Krebs worked diligently to safeguard our elections from interference and misinformation,” House Intelligence Committee Chairman Rep. Adam Schiff, D-Calif., wrote on Twitter. “He protected our democracy. And spoke truth to power. That’s why Trump retaliated and fired him. It’s pathetic and predictable from a president who views truth as his enemy.”Sen. Mark Warner, D-Va., the top Democrat on the Senate Intelligence Committee, also defended Krebs, calling him “extraordinary public servant,” saying the president fired him “simply for telling the truth.”While many Republicans repeated their standard response that the president can surround himself with whoever he chooses, they gave Krebs glowing reviews, contrary to Trump’s claims that he put out “highly inaccurate” information.”He’s always seem very capable and knowledgeable to me,” said Sen. John Kennedy of Louisiana.Sen. Ted Cruz, R-Texas, walked the same careful line, saying Krebs “did an able job in a difficult and important role” from everything he has seen.Senate Intelligence Committee Chairman Marco Rubio, R-Fla., gave Trump the benefit of the doubt, saying his “interactions with Krebs have been positive … I don’t have any criticism of his work, but maybe the president knows something I don’t.’Krebs’ firing comes less than a week after Trump fired Secretary of Defense Mark Esper, which the Senate’s top Republican, Majority Leader Mitch McConnell, notably criticized as well.President-elect Joe Biden’s team responded to Krebs’ firing through a campaign spokesman. Krebs should be “commended for his service in protecting our elections, not fired for telling the truth,” Michael Gwin said.Copyright © 2020, ABC Audio. All rights reserved.