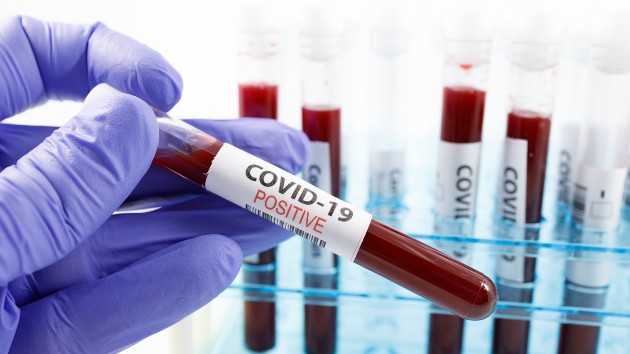 By MORGAN WINSOR, EMILY SHAPIRO, ERIN SCHUMAKER, IVAN PEREIRA, JON HAWORTH and MEREDITH DELISO, ABC News(NEW YORK) — A pandemic of the novel coronavirus has now killed more than 1.3 million people worldwide.Over 57 million people across the globe have been diagnosed with COVID-19, the disease caused by the new respiratory virus, according to data compiled by the Center for Systems Science and Engineering at Johns Hopkins University. The actual numbers are believed to be much higher due to testing shortages, many unreported cases and suspicions that some national governments are hiding or downplaying the scope of their outbreaks. The criteria for diagnosis — through clinical means or a lab test — has also varied from country to country.The United States is the worst-affected nation, with more than 11.7 million diagnosed cases and at least 252,838 deaths.Nearly 200 vaccine candidates for COVID-19 are being tracked by the World Health Organization, at least 10 of which are in crucial phase three studies. Of those 10 potential vaccines in late-stage trials, there are currently five that will be available in the United States if approved.

Here’s how the news is developing Friday. All times Eastern:Nov 20, 9:57 amFlorida Sen. Rick Scott tests positive, urges everyone to wear masksSen. Rick Scott, R-Fl., announced Friday that he has tested positive for COVID-19.After returning to Florida last week, Scott came into contact with someone who subsequently tested positive. The Republican senator has been quarantining at his home in Naples since then. He took multiple rapid tests earlier this week, all of which were negative, but a PCR (polymerase chain reaction) test he took Tuesday came back positive Friday morning, according to a press release from his office.”After several negative tests, I learned I was positive this morning,” Scott said in a statement Friday. “I am feeling good and experiencing very mild symptoms. I will be working from home in Naples until it is safe for me to return to Washington, D.C.”Scott is the eighth member of Congress to test positive for COVID-19 just this week.”I want to remind everyone to be careful and do the right things to protect yourselves and others. Wear a mask. Social distance. Quarantine if you come in contact with someone positive like I did,” he said. “As we approach Thanksgiving, we know this holiday will be different this year. But, listen to public health officials and follow their guidance. We will beat this together, but we all have to be responsible.”ABC News’ Mariam Khan contributed to this report.

Nov 20, 8:54 amUS Army general says there’s 40 million vaccine doses ready to go once FDA grants authorizationA top U.S. Army general who is co-leading the federal government’s COVID-19 vaccine initiative said they will start distributing doses throughout the nation 24 hours after the Food and Drug Administration grants emergency use authorization (EUA).”We have about 40 million doses of vaccine, give or take, exactly when the EUA comes out,” Gen. Gustave Perna, chief operations officer for Operation Warp Speed, told ABC News chief anchor George Stephanopoulos in an interview Friday on Good Morning America.”We’re going to execute fair and equitable distribution based on the population of the jurisdictions — jurisdictions identified as the 50 states, eight territories and six metropolitan cities,” he added, noting that governors will then “make sure the priority for the execution of the vaccine within the state will be implemented.””We’re going to get it down to the states. The states are going to tell us exactly where they want it to be,” the general said. “We will ensure that the vaccine gets there in a timely manner. We’ll make an initial push — once EUA is approved — of everything we have on the shelf, and then every week we’re going to maintain a cadence of delivery of vaccine so the states have access and prior planning knowledge to ensure it gets to the right places and the right times.”Perna said the news that Pfizer and partner BioNTech will submit a EUA request to the FDA on Friday for their COVID-19 vaccine candidate is “really remarkable.” He expressed “100% confidence” that Operation Warp Speed’s distribution plan will be a success — a process he said began some six months ago.”We started with the development, manufacturing. We have taken no shortcuts to this end,” he said. “It has been a well regulated and accounted for process that we are ensuring occurs the right way.”The general said Operation Warp Speed has also teamed up with companies like Walgreens and CVS.”I’ve sat down with their CEOS and their teams — very elaborate, very comprehensive, operational plans on how they can partner with states to deliver vaccines from inner cities to rural America,” he said, “and I’m incredibly confident that they can do that.”When asked whether outgoing President Donald Trump’s refusal to cooperate with President-elect Joe Biden and his transition team has hindered vaccine efforts, Perna replied, “Absolutely not.”

Nov 20, 6:45 amPfizer and BioNTech to submit emergency authorization request to FDA todayPfizer and partner BioNTech announced they will submit a request on Friday to the U.S. Food and Drug Administration for emergency use authorization of their COVID-19 vaccine candidate.The submission, which is based on a vaccine efficacy rate of 95% demonstrated in the Phase 3 clinical study with no serious safety concerns to date, will potentially enable use of the drug in high-risk populations in the United States by the middle to end of December.”Our work to deliver a safe and effective vaccine has never been more urgent, as we continue to see an alarming rise in the number of cases of COVID-19 globally,” Dr. Albert Bourla, chairman and CEO of Pfizer, said in a statement Friday. “Filing in the U.S. represents a critical milestone in our journey to deliver a COVID-19 vaccine to the world and we now have a more complete picture of both the efficacy and safety profile of our vaccine, giving us confidence in its potential.”The companies have already initiated rolling submissions with several drug regulatory agencies around the world, including in Australia, Canada, Europe, Japan and the United Kingdom, and plan to submit applications to others in the coming days. The companies said they will be ready to distribute the vaccine within hours after authorization.Based on current projects, the companies said they expect to produce globally up to 50 million doses in 2020 and up to 1.3 billion doses by the end of 2021.”Filing for Emergency Use Authorization in the U.S. is a critical step in making our vaccine candidate available to the global population as quickly as possible,” Dr. Ugur Sahin, CEO and co-founder of BioNTech, said in a statement Friday. “We intend to continue to work with regulatory agencies worldwide to enable the rapid distribution of our vaccine globally. As a company located in Germany in the heart of Europe, our interactions with the European Medicines Agency (EMA) are of particular importance to us and we have continuously provided data to them as part of our rolling review process.”

Nov 20, 6:40 amRussia reports record high of over 24K new casesRussia confirmed 24,318 new cases of COVID-19 in the last 24 hours, according to the country’s coronavirus response headquarters.It’s the highest single-day tally of COVID-19 infections that Russia has reported since the start of the pandemic, and it marks the second straight day that the country has set a new record for its daily case counts.An additional 461 fatalities from COVID-19 were also registered nationwide over the past day, just under Russia’s peak of 463 deaths recorded the previous day. The country’s cumulative total now stands at 2,039,926 cases, including 35,311 deaths, according to the coronavirus response headquarters.The Eastern European nation of 145 million people has the fifth-highest tally of COVID-19 cases in the world, behind only the United States, India, Brazil and France, according to a real-time count kept by Johns Hopkins University.

Nov 20, 6:02 amNorth Carolina college student dies from COVID-19 complicationsA 23-year-old college student in North Carolina died from COVID-19 complications on Thursday morning.Jamesha Waddell was a senior at Livingstone College, a private, historically black Christian college in Salisbury, about 45 miles northeast of Charlotte. She left campus on Sept. 19 and was self-isolating at home after testing positive for COVID-19, according to Livingstone College president Jimmy Jenkins.”While isolating at home, Jamesha’s condition worsened, and she required hospitalization and intensive care,” Jenkins said in a statement Thursday. “This morning, her spirit transitioned due to complications related to the COVID-19 virus.”As students prepare to leave campus next week for winter, Jenkins urged them to “remain vigilant in mitigating the spread of this virus” by wearing a face mask, practicing social distancing and washing hands frequently.

Nov 20, 5:31 amIndia becomes second country in the world to reach nine million casesIndia’s tally of COVID-19 cases has hit the nine million mark, becoming only the second country in the world to do so.The Indian Ministry of Health and Family Welfare confirmed 45,882 new cases of COVID-19 on Thursday, along with an additional 584 deaths from the disease. That brings the country’s cumulative total to 9,004,365 cases with 132,162 deaths.Despite surpassing the grim milestone, India has seen a steady decline in its infection rate since reaching a peak of 97,894 new cases on Sept. 16.India has the second-highest tally of COVID-19 cases in the world, behind only the United States, and the third-highest death toll from the pandemic, after the United States and Brazil. The relatively low death toll in a vast county of 1.3 billion people has raised questions about how India is counting COVID-19 fatalities.

Nov 20, 4:20 amUS records all-time high of over 187K new casesThere were 187,833 new cases of COVID-19 confirmed in the United States on Thursday, marking the highest single-day increase in infections worldwide since the pandemic began, according to a real-time count kept by Johns Hopkins University.It’s the first time that the United States has reported over 180,000 newly diagnosed infections. Thursday’s count shatters the country’s previous record of 177,224 new cases on Nov. 13.An additional 2,015 fatalities from COVID-19 were also registered nationwide on Thursday, the highest since May 6 but still under a peak of 2,609 new deaths on April 15, according to Johns Hopkins data.A total of 11,717,947 people in the United States have been diagnosed with COVID-19 since the pandemic began, and at least 252,555 of them have died, according to Johns Hopkins data. The cases include people from all 50 U.S. states, Washington, D.C. and other U.S. territories as well as repatriated citizens.Much of the country was under lockdown by the end of March as the first wave of pandemic hit. By May 20, all U.S. states had begun lifting stay-at-home orders and other restrictions put in place to curb the spread of the novel coronavirus. The day-to-day increase in the country’s cases then hovered around 20,000 for a couple of weeks before shooting back up and crossing 100,000 for the first time on Nov. 4.Copyright © 2020, ABC Audio. All rights reserved.