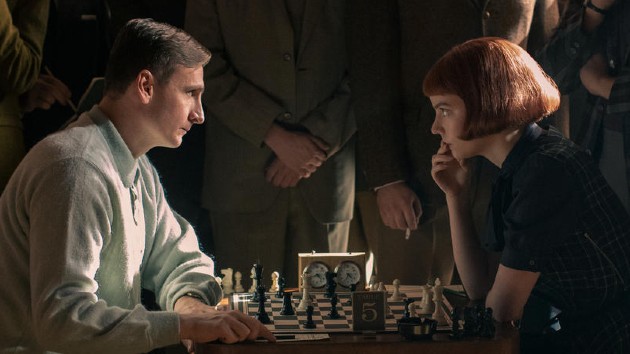 (LOS ANGELES) — Netflix announced that some 62 million households worldwide have checked out the new series The Queen’s Gambit since its debut in October, making it the streaming giant’s biggest scripted limited-run series ever.

Set in the ’50s and ’60s, The Queen’s Gambit tells the fictional story of Beth Harmon, an orphaned chess prodigy who struggles with drug and alcohol dependency and emotional issues while trying to become the world’s greatest chess player.

Peter Friedlander, the VP of Original Series for Netflix noted in a statement, “Three years ago when [we were] first approached us about adapting The Queen’s Gambit – Walter Tevis’ 1983 book about a young chess prodigy — we felt it was a compelling tale…However, I don’t think any of us could have predicted that [the series] — and the extraordinary Anya Taylor-Joy — would become the global phenomena they are today.”

The exec describes Taylor-Joy’s Beth as “an underdog who faces addiction, loss and abandonment.” He notes, “Her success — against the odds — speaks to the importance of perseverance, family, and finding, and staying true to, yourself.”

The network says the show’s success is sparking not only interest in Tevas’ novel, which now sits on the New York Times Bestseller List some 37 years after its release, but also in chess itself.

Friedlander’s statement noted that Google searches regarding the game have jumped to a nine-year high in the 28 days Gambit has been available on Netflix, and inquiries for “chess sets” have jumped 250% on eBay.