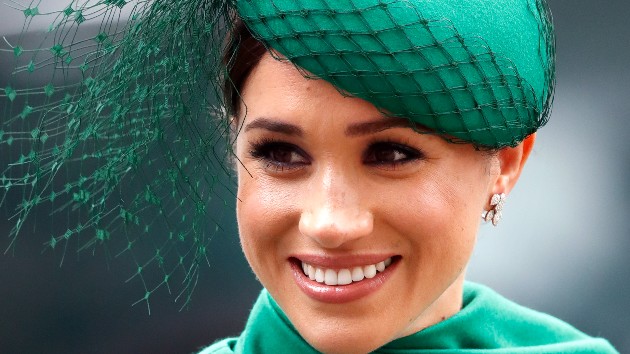 By ZOE MAGEE, ABC News(NEW YORK) — In an essay for the New York Times, Meghan Markle, the Duchess of Sussex, revealed the trauma she and her husband Prince Harry suffered as a result of a miscarriage last July.The duchess describes the moment she knew she was losing her unborn child.“I felt a sharp cramp. I dropped to the floor…I knew, as I clutched my firstborn child, that I was losing my second,” she wrote. “Hours later, I lay in a hospital bed, holding my husband’s hand. I felt the clamminess of his palm and kissed his knuckles, wet from both our tears. Staring at the cold white walls, my eyes glazed over. I tried to imagine how we’d heal.”The duchess, who has a 19-month-old son, Archie said she was publicizing her grief to help others who have suffered similarly.“Losing a child means carrying an almost unbearable grief, experienced by many but talked about by few,” she wrote.Others have recently been raising awareness of what it means to miscarry a child, and breaking down any potential stigma attached to such loss.Chrissy Teigen and her husband John Legend shared very raw photos of Teigen in the hospital moments after they’d lost their child.”It was designed for the people that were hurting and John was very uncomfortable, taking them,” Teigen told ABC News’ Good Morning America co-anchor Michael Strahan in an interview that aired Tuesday on GMA.The Duchess’ editorial echoes these sentiments, writing, “In the pain of our loss, my husband and I discovered that in a room of 100 women, 10 to 20 of them will have suffered from a miscarriage. Yet despite the staggering commonality of this pain, the conversation remains taboo, riddled with (unwarranted) shame, and perpetuating a cycle of solitary mourning.”Meghan also touched on the pandemic and the social unrest in the U.S. following the deaths of George Floyd and Breonna Taylor.“A young woman named Breonna Taylor goes to sleep, just as she’s done every night before, but she doesn’t live to see the morning because a police raid turns horribly wrong. George Floyd leaves a convenience store, not realizing he will take his last breath under the weight of someone’s knee, and in his final moments, calls out for his mom. Peaceful protests become violent. Health rapidly shifts to sickness. In places where there was once community, there is now division,” she wrote.She concluded the article by asking for everyone to pull together over the holiday season.”So this Thanksgiving, as we plan for a holiday unlike any before — many of us separated from our loved ones, alone, sick, scared, divided and perhaps struggling to find something, anything, to be grateful for — let us commit to asking others, ‘Are you OK?,"” she wrote. “As much as we may disagree, as physically distanced as we may be, the truth is that we are more connected than ever because of all we have individually and collectively endured this year.”A source close to the Sussex’s explaining the timing of Wednesday’s editorial said the couple now felt ready to share their news.ABC News also understands that the rest of the royal family were aware of the situation and the couple’s desire to talk about it.Prince Harry and Meghan stepped down from their roles as senior members of the royal family earlier this year. The couple now lives in California with their son Archie.