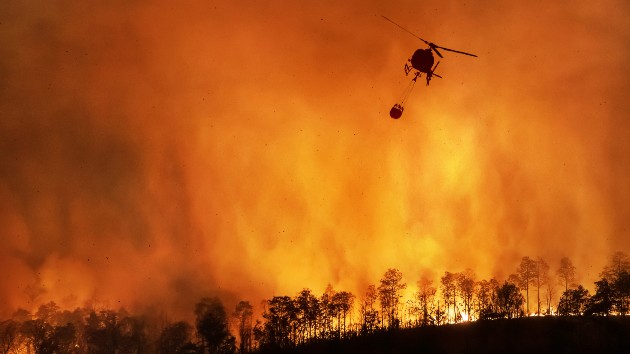 By RAMIE FATHY, ABC News(NEW YORK) — With the COVID-19 pandemic dominating the headlines, President-elect Joe Biden has just released his administration’s plan to address another potentially catastrophic global threat: climate change.Scientists warn that it’s not just plants and animals threatened by rising temperatures — climate change is impacting humans as well. And for medical experts, this is particularly troubling.”We’re in it now,” said Dr. Paul Auerbach, an emergency medicine physician at Stanford University and author of Enviromedics, the pioneering book on climate change and health. “It’s happening, and it all boils down to health. This is a health care issue.”Though the effects of climate change on health are numerous, they remain unfamiliar to many. Climate change has now been linked to heat-related illnesses, the spread of infectious disease, physical harm from extreme weather, health complications related to poor air quality, and other individual and public health harms.Perhaps most importantly, climate change could become one of the main drivers of future novel outbreaks, and may have contributed to the current COVID-19 pandemic.”The next global pandemic could be, in some capacity, due to climate change,” said Dr. Jesse Bell, professor of Health and Environment at the University of Nebraska Medical Center College of Public Health.ABC News spoke with a variety of health experts to determine the top five ways climate change is affecting human health.

Heat-related illnessAs the planet gets warmer, people across the globe are beginning to feel the heat.”Right now, the clearest effects of climate change are through heat,” said Dr. Aaron Bernstein, a pediatrician and interim director of the Center for Climate, Health, and the Global Environment at the Harvard T.H. Chan School of Public Health.”More people die each year from heat — more than from many medical problems,” Bernstein said, noting that heat waves may aggravate a wide range of illnesses, from asthma to mental health disorder to diabetes and kidney disease.So dire is the threat to human health that Bernstein helped compile guidelines for educating medical trainees about the health effects of climate change.”Heat waves likely kill more people in the U.S. than any other climate-related disaster, because heat waves occur everywhere across the U.S., including places as different and distant as Nebraska, Los Angeles, New York City, and Seattle,” said Bell.

Infectious diseaseAs anyone who has eaten leftovers that have been left out too long can attest, infectious agents — and the bugs that carry them — thrive in particular environments and conditions. And as climate change alters environmental conditions across the planet, so too does it affect the geographic distribution of infectious diseases.”Some infectious diseases that were already present in North America, like Lyme disease, leishmaniasis, and various fungal infections, have already become an issue in areas that were previously unaffected by them,” said Dr. Misha Rosenbach, a dermatologist and climate change activist at the University of Pennsylvania.According to the Centers for Disease Control and Prevention, the number of Lyme cases in the U.S. has more than tripled since 1995, and rates continue to rise.Meanwhile, climate change has also facilitated the spread of waterborne infectious diseases.”Warmer temperatures around the globe cause rising sea levels, warmer seawater, and either more frequent or increasingly severe natural disasters like hurricanes and floods,” said Rosenbach. “And each of these events is associated with a range of infectious diseases, including life-threatening diarrheal disease, respiratory infections, and skin infections.”Natural disasters, such as recent hurricanes Harvey and Sandy, brought diseases like cholera and bacterial infections in their wake, according to Dr. Saul Hymes, an assistant professor of clinical pediatrics and a specialist in pediatric infectious diseases at Stony Brook Children’s Hospital.Climate change is also a driving force behind “spillover” events, in which viruses leap from their animal hosts into humans, Hymes said.”Climate change causes disruption to natural animal habitats, and also movement of people into new habitats to avoid flood regions or drought-prone areas,” Hymes said. “This can bring humans and animals into more contact and lead to increased likelihood of disease crossover events like those we are seeing more often, including SARS-CoV-2.”

Extreme weather eventsAlong with the ongoing pandemic, 2020 has also witnessed a record-breaking hurricane season as well as wildfires and floods across the globe — and climate change is thought to be contributing to the severity of all of these extreme weather events.Experts predict that these are not outlier events but rather the start of a new normal.”These trends will likely continue over the next century,” Bell said.And extreme weather events have indirect health impacts by creating refugee areas.”As with the Astrodome in Houston after Katrina, these can become overcrowded and thus are hotbeds for transmission of flu and other common person-to-person viral infections,” Hymes said.

Air qualityAnother way climate change affects human health is through its impact on air quality. While the burning of fossil fuels directly pollutes the air, global warming that’s a byproduct of fossil fuel combustion also contributes to and exacerbates worsening air quality.”For one, climate change has led to drought and to heat waves that have caused the California wildfires, and the smoke and particulates in the air directly harms those with respiratory issues like COPD or asthma,” Hymes said.Even without wildfires, rapid temperature swings and ozone depletion can exacerbate respiratory illnesses like asthma, according to Hymes. Meanwhile, climate change can influence air quality and human disease through an intermediary: plants.”Warmer climate and longer summers have led to alterations in pollination and flowering cycles — some plants now undergo a second flowering in a season, for example,” said Hymes. “In general, there’s been either a significant increase in pollen counts or a major shift in their timing, or both. And these are often significant asthma triggers as well as affecting other allergic conditions.”

Mental health and traumaAccording to Bell, extreme weather events can spur mental distress.”The psychosocial impact of extreme weather events is huge,” he said. “People have their possessions and homes destroyed. They must move and rebuild and often are doing so with much of their wealth obliterated. This can cause significant mental distress, rates of depression and anxiety, as well as PTSD rise in survivors of such events.”Some researchers have already begun documenting the psychological impacts of climate change, including major depression, anxiety, PTSD and adjustment disorders, as well as increases in drug and alcohol use and domestic violence. The chronic stress caused by climate disasters has also been associated with worse cardiovascular health.”It is absolutely imperative that we address these psychological issues because they have impacts on everything: personally, socially, economically, politically,” said Dr. Lise van Susteren, a psychiatrist and environmental activist.But to van Susteren, climate change’s effects on mental health extend far beyond the individual level.”Injuries, deaths, houses being burned down or flood, the loss of possessions and general disruption of life — these all have a psychological toll,” van Susteren said. “In turn, all of these psychological damages have an impact on our physical health, and this has repercussions on all aspects of our lives.”Though climate change has already begun to impact our health and well-being, scientists and doctors say it’s not too late to take action to combat it and to mitigate its effects — through personal choices to reduce your carbon footprint, through community action, and through smart policy.”Realize that everything you do is part of the collective, and realize that you’re setting the social norm,” said van Susteren. “It all begins at home.”Copyright © 2020, ABC Audio. All rights reserved.