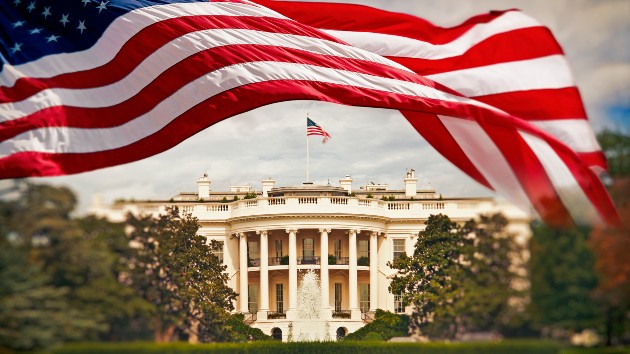 By LIBBY CATHEY, ADIA ROBINSON, LAUREN KING, CATHERINE THORBECKE, LAUREN LANTRY and KIARA BRANTLEY-JONES, ABC News(WASHINGTON) — President Donald Trump is slated to hand over control of the White House to President-elect Joe Biden in 55 days.Here is how the transition is unfolding. All times Eastern:

On this Thanksgiving Day, we’re thankful for our Family, Friends & the Doctors, Nurses, First Responders & Men & Women of our Armed Forces that we’ve met along the way. God Bless our Healthcare Workers & our Military, especially those deployed overseas Defending Our Freedom! ??? pic.twitter.com/LpjZGqbRHc

“On this Thanksgiving Day, we’re thankful for our Family, Friends & the Doctors, Nurses, First Responders & Men & Women of our Armed Forces that we’ve met along the way. God Bless our Healthcare Workers & our Military, especially those deployed overseas Defending Our Freedom!” he tweeted.In a message earlier Thursday, the Pence family wished everyone a Happy Thanksgiving on behalf of the vice president and second lady Karen Pence.Nov 26, 6:37 pmTrump takes first questions since Biden declared victoryAfter wrapping his teleconference with troops, Trump spoke with reporters. It was the first time he’s answered questions since Biden declared victory.  The president delivered a lengthy list of grievances and unfounded claims of election fraud across the country.  “It’s going to be a very hard thing to concede because we know there was massive fraud,” Trump said. The president provided no direct evidence of fraud while claiming irregularities in Pennsylvania, Michigan and Wisconsin skewed the results in Biden’s favor.  He also, again, went after Dominion Voting Systems.When asked whether he would announce a run in 2024 if Biden occupies the White House on Jan. 20, the president said, “I don’t want to talk about 2024.”Asked if he would leave the White House if Biden is inaugurated, Trump responded, “Certainly, I will. And you know that.” He was also asked whether he would attend Biden’s inauguration as tradition dictates.”I don’t want to say that yet. I know the answer, I’ll be honest, I know the answer but I just don’t want to say it yet,” he said.

Nov 26, 6:34 pmTrump touts stock market, vaccine timeline in teleconference with troopsTrump spoke to military troops via video conference on Thursday from the Diplomatic Room of the White House.  “My profound thanks to each and every one of you for your devoted service to our nation. Our nation is doing very well. It’s the highest honor of my life to serve as your commander in chief,” he said, reading from a binder.He veered off his prepared remarks from time to time to pat himself on the back for ensuring the U.S. did not get involved in any wars during his four years in office and ad-libbed some self-congratulatory remarks about the stock market and vaccine development — saying the vaccine will be delivered to frontline workers starting next week or the week after next.”You’re doing an incredible job and your country is doing well,” he said to the service members, which represented the Army, Navy, Marine Corps, Air Force, Space Force and Coast Guard.The president also took some questions from reporters and said he would “probably” visit Georgia on Saturday to campaign for the Republican senators who face runoff elections. Trump said it would “most likely be at an airport.”Following the event, the White House indicated that the trip to Georgia would likely occur on Dec. 5.Earlier on Thursday, Trump visited his golf course in Virginia.Nov 26, 4:16 pmBidens speak to front line workers on ThanksgivingPresident-elect Biden and the future first lady Jill Biden spent some time on Thanksgiving virtually talking to front line workers, according to a tweet.

Jill and I were honored today to talk to some of the heroes on the front lines of this crisis. We’re thankful today and every day for the nurses and firefighters who sacrifice so much to keep our communities safe. We see the very best of America in your courage and selflessness. pic.twitter.com/5vrIXnZncz

“Jill and I were honored today to talk to some of the heroes on the front lines of this crisis,” Joe Biden wrote. “We’re thankful today and every day for the nurses and firefighters who sacrifice so much to keep our communities safe. We see the very best of America in your courage and selflessness.”In a message earlier Thursday, the Bidens said they were celebrating a pared-down Thanksgiving this year and foregoing their traditional large family gathering amid the pandemic.Nov 26, 5:01 pmPerdue and Loeffler share Thanksgiving messages Georgia’s incumbent Sens. David Perdue and Kelly Loeffler shared Thanksgiving messages via Twitter Thursday.Perdue said he was “especially grateful” for military service members, first responders and health care workers this year.

This #Thanksgiving, Bonnie and I are especially grateful for our brave military men and women, first responders, law enforcement and health care workers. Please join us in praying for them as they serve our state and country. pic.twitter.com/MLfht9xk6E

“Please join us in praying for them as they serve our state and country,” he wrote.Loeffler shared a video reflecting on the tumultuous past year.“Though it’s been a year unlike any other we have so much to be grateful for, today and every day, I am thankful for the American dream,” she said. “I was blessed to have the opportunity to live the American dream.”

“Only in America are these stories possible, and I’m going to continue to fight for that,” she added.Perdue and Loeffler are locked in runoffs against Democratic candidates Raphael Warnock and Jon Ossoff that will decide which party controls the Senate.Nov 26, 3:10 pmPelosi thanks military service members in Thanksgiving tweet House Speaker Nancy Pelosi, D-Calif., shared a message on Twitter to thank military service members on Thanksgiving.

As many celebrate virtually during this extraordinarily challenging time, we take a moment to give thanks for our brave servicemembers around the world protecting our nation. pic.twitter.com/7XbjLvTfY5

“As many celebrate virtually during this extraordinarily challenging time, we take a moment to give thanks for our brave servicemembers around the world protecting our nation,” Pelosi wrote.Nov 26, 2:44 pmMcConnell shares what he’s grateful for in Thanksgiving messageSenate Majority Leader Mitch McConnell, R-Ky., shared a video message via Twitter wishing Americans a happy Thanksgiving on Thursday.

We are blessed to live in the greatest country the world has ever known. Even in a trying year unlike anything we’ve seen before, we are constantly reminded why. Happy Thanksgiving, everyone. pic.twitter.com/TkQfXbq5F2

“Even in difficult times, Thanksgiving is an opportunity to reflect on our blessings,” McConnell said, expressing his gratitude to military service members, health care workers and Kentucky “communities who are standing together even if they are six feet apart.”“So, as we enjoy restful moments this holiday season, let’s keep in our hearts all the families who have lost loved ones or livelihoods this year, and let’s give thanks for the many blessings we’re so fortunate to count as our own,” he added.Nov 26, 1:41 pmGeorgia Senate candidates Warnock and Ossoff spend Thanksgiving volunteering Georgia’s Democratic Senate candidates Raphael Warnock and Jon Ossoff on Thursday participated in a food giveaway event at the Georgia World Congress Center in Atlanta.Warnock and Ossoff are locked in runoffs in January with incumbents Kelly Loeffler and David Purdue. The runoffs will decide which party controls the Senate.Nov 26, 12:15 pmVice President-elect Kamala Harris shares Thanksgiving message Vice President-elect Kamala Harris wished Americans a happy Thanksgiving via Twitter Thursday, sharing a photo with her husband, Doug Emhoff.“Like families across America, our Thanksgiving looks different this year. But I am incredibly grateful for the ability to stay virtually connected to our loved ones so we can get this virus under control,” Harris wrote.

Like families across America, our Thanksgiving looks different this year. But I am incredibly grateful for the ability to stay virtually connected to our loved ones so we can get this virus under control.From @DouglasEmhoff and I, have a safe and happy Thanksgiving. pic.twitter.com/3WhQx6dCaU

Nov 26, 9:55 amJoe and Jill Biden urge Americans to stay home, honor front-line workers in Thanksgiving messageIn a new video posted to Twitter, President-elect Joe Biden and future first lady Jill Biden talk about their altered Thanksgiving, reminding Americans that while celebrations may be more isolated this year, they are helping keep Americans safe.“We have a long tradition of traveling to Nantucket with our big family, a large family, every Thanksgiving. We won’t be doing that this year. This year we’re going to be staying in Delaware, with just a small group around at our dinner table,” the president-elect said. “I know this isn’t the way many of us hoped we’d spend our holiday. We know that a small act of staying home is a gift to our fellow Americans.”He continued: “Yes, it’s a personal sacrifice that each of our families can make and should make to save somebody else’s life. But it’s also a shared sacrifice for the whole country, a statement of common purpose that says we care about one another and we’re all in this together.”The future first lady added that this year, “We’re thankful for the millions of Americans who have been working on the front lines throughout this pandemic.”

Thanksgiving has always been a special time for the Biden family. And while I know this isn’t the way many of us hoped to spend the holiday, the small act of staying home is a gift to our fellow Americans. pic.twitter.com/4mHOEFIcjV

Jill Biden also spoke directly to families who have lost a loved one to the pandemic this year, noting her own family’s understanding of the “empty chair” at the table.“Joe and I know the pain of that empty chair,” she said. “If you are one of those families, please know that our hearts are with you and that you know that you aren’t alone.”Finally, Joe Biden urged Americans to come together this holiday.“We might not be able to join our hands around a table with our loved ones, we can come together as a nation,” he said.Joe and Jill Biden also penned an op-ed for CNN about the holiday and how this year’s celebration requires large sacrifices to keep the country safe.Copyright © 2020, ABC Audio. All rights reserved.