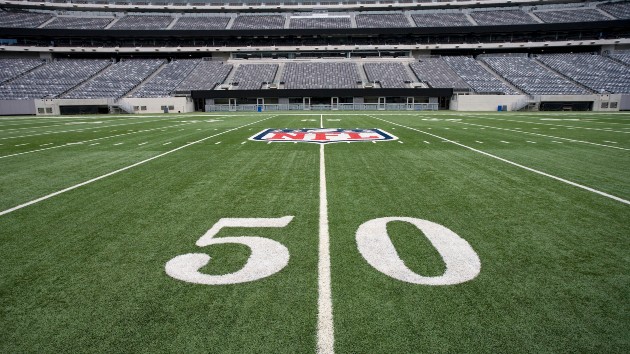 By IVAN PEREIRA and KATIE CONWAY, ABC News(NEW YORK) — The NFL cracked down this weekend on two teams who broke the league’s coronavirus-related policies and are looking into two other teams for possible violations, according to reports.The league fined the New Orleans Saints $500,000 after the players and the team posted a video on social media showing unmasked team members celebrating their Nov. 8 victory over the Tampa Bay Buccaneers in the locker room, a source told ABC News. The NFL also took away a seventh-round draft pick as punishment for the Saints’ violation, the source said.The Saints are appealing the punishment, according to ESPN.A source told ABC News the team’s steep fine and draft pick loss stemmed from the Saints’ repeated violations of COVID-19 protocols and warnings from the league. In September, Saints Coach Sean Payton, who was seen in the video, and the team were fined a combined $350,000 after he was seen not wearing a face mask during a game.Payton told NOLA.com back in September he should have been more careful while on the field and kept his mask on.”It’s something we’re just going to have to remind ourselves to do,” he said.The NFL sent out a memo to all teams on Nov. 3 with updated COVID-19 rules that stressed: “All players and staff must wear masks or double-layered gaiters in the locker room on game day — prior to the game, during halftime, and post-game.”The New England Patriots were also fined $350,000 for violations related to positive tests of Cam Newton and other players in October, ESPN reported.Although Newton didn’t play in the Oct. 4 game against the Kansas City Chiefs two days after he was diagnosed, 20 teammates and staff members who were deemed to be close contacts to Newton flew out to the game, according to ESPN. The day after the game, cornerback Stephon Gilmore, who had been in close contact with Newton, tested positive for COVID-19, ESPN reported.The Patriots did not immediately release a statement about the fine.The league is also investigating the Baltimore Ravens and the Denver Broncos over coronavirus-related violations, sources told ABC News.The two teams were scheduled to play on Thanksgiving Day, but the game was moved to Tuesday after the Ravens reported at least 19 coronavirus cases among its players and staff members, including quarterback Lamar Jackson.The Broncos’ current starting quarterback, Jeff Driskel, also tested positive last week.The Broncos had its three quarterbacks in a room together for a meeting for an extended period of time without masks after Driskel contracted the disease, according to sources. The players, who were considered close contacts to Driskel, allegedly took off their tracking devices that are used by teams to assist with contact tracing, according to the sources.Broncos head coach Vic Fangio was fined earlier in the season for not wearing a face mask, and the team would be considered a repeat offender if the league determines it violated protocols.The Broncos released a statement Saturday that said the team would work with the NFL if they discover any positive tests among their players or staff.Dr. Allen Sills, the NFL’s chief medical officer, told ABC News he expects the situation to get harder as the season progresses due to the growing cases across the country.He added that the league is constantly evolving its coronavirus protocols and pushes teams to follow the science.”What keeps us safe are the same measures that work for everyone outside of football, and that’s wearing masks, physical distancing, good hand hygiene, prompt reporting of symptoms,” Sills told ABC News.Copyright © 2020, ABC Audio. All rights reserved.