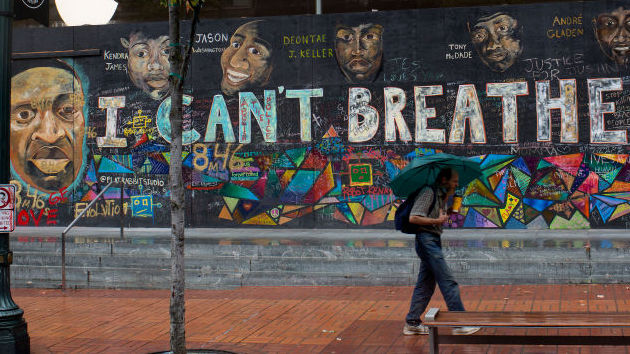 By: ERIC MOLLO, ABC News(NEW YORK) – We see it in cities and neighborhoods and in many places across the globe: street art. This year, it can be seen as a symbol of unity for a very divided nation.Throughout the news cycle this summer, Americans witnessed anger across the country. There were videos of marches and protestors clashing with law enforcement. Behind those marches were pictures of people of color who lost their lives in interactions with police officers.Those images were often in the form of street art. Murals remembered lives that were lost at the hands of law enforcement, and they popped up across America. In Minneapolis, there is a blue and gold mural of George Floyd painted on a brick wall. In Annapolis, Maryland, a 7,000 square foot picture of Breonna Taylor’s face was painted across a park. In New York, almost 2,000 miles away from Colorado, where 23-year- old Elijah McClain was killed in a police interaction last August, there is a mural of McClain playing the violin, with the words “I’m sorry” written next to him.Vince Ballentine is a professional artist who spray painted the mural of McClain in New York. He spoke with ABC Radio for its “Celebrating the Arts” special. When he memorializes someone, Ballentine says he does not try to send one clear message:“There’s a beauty in being a bit ambiguous to the point, like the words are there and he’s there and it’s like, ‘Oh, OK, cool.’ But a lot of people still don’t know that story. So when they look at it, they kind of have to interpret it because I have to say, ‘Well, what am I looking at?’”Ballentine says one way to use public spaces is to raise the voices of those who are not being heard.“People were saying, like, we really don’t want to get too political. There wasn’t really space for that to really resonate. But now, in the street art world, it’s like sometimes people just don’t care. You don’t care if we get permission to do this, we’re going to do it anyway.”Sabina Andron is a lecturer in architectural history and theory at the Berkeley School of Architecture in London. Andron studies street art and murals. She tells ABC News that city walls are actually important canvases during times of unrest—they give people the opportunity to assert that their needs are not being met by public institutions intended to serve them:“If we look at the history of all of these forms of wall marking, most of them do come from a countercultural and defiant and revolutionary aspiration. Essentially, they are ways of affirmation that people who don’t have more powerful ways to affirm themselves.”According to Andron, murals can actually function as a tool for observers to understand another person or group of people trying to send a message:“When we encounter messages in the street… there’s kind of a questioning that can happen inside us where we think, ‘OK, who is this person? What made them want to say this?’”Andron believes the messages from street art best resonate with people when they witness them in-person. The stature of murals and street art are meant to let public institutions know, loudly, that there are people hurting in America and they want change. “If we see something that’s of a bigger scale, it impresses us through that. Street art is doing what it always does, which is it holds up a mirror. It shows us who we are.”In this way, street art can be seen as symbol that actually expresses a desire for unity. It is not only a demand for better services, but also an invitation to communicate and better know one another.Ballentine says he wants his work to help people build a better understanding of one another, not use it as a symbol to pit people against each other.“They’re done with such energy, and I think that translates… The one thing that I always just want to drive home, it’s not black lives matter versus all lives matter. It is who is this person anyway? And that by itself does so much… it’s not a command. It’s a question.” Copyright © 2020, ABC Audio. All rights reserved.