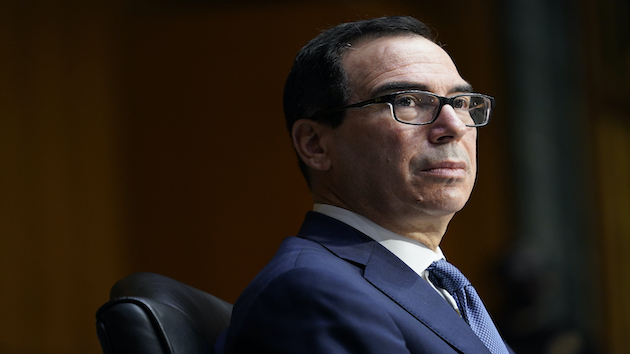 “As far as I can tell, Secretary Mnuchin, you are leaving the country worse off that you found it,” Brown said. “Other than using your final months in office to work for the people who you have sworn to serve, you appear to be trying to sabotage our economy on the way out the door.”

Democrats have called for the central bank to maintain control of the more than $400 billion unspent CARES Act dollars, paving the way for the incoming Biden administration to restart lending facilities in 2021.

The Fed publicly broke with Mnuchin last month, signaling disappointment in his decision. But Federal Reserve Chairman Jerome Powell, who testified alongside Mnuchin, indicated he would return the money to the Treasury Department, where it can then be reappropriated by Congress.

“Non-CARES Act funds are available to support emergency lending facilities if they are needed,” Powell said. “We are committed to using our full range of tools.”

Mnuchin argued that the programs in question — the Fed’s corporate credit facilities, municipal lending facility and the Main Street Lending program for small and mid-size businesses — have served their purpose and are no longer necessary.

Beyond that, he argued that a Dec. 31 end date is mandated by law.

“I personally negotiated many of these provisions. Matter of fact, I brought the CARES Act with me because I reference it and keep it next to my desk,” Mnuchin said. “The statute was very clear.”

But Democrats see it differently. They say the deadline limits the Treasury from providing more funding to the Fed programs after the end of the year, but it doesn’t stop the Fed from retaining the already earmarked money to run the programs.

Republicans have been broadly supportive of Mnuchin’s move, arguing that Congress should pass new measures to address future challenges.

“If some terrible thing were to happen to threaten the viability of our financial markets, then the Treasury and the Fed should come back to Congress and ask for appropriate facilities at that time,” Sen. Toomey, R-Pa., said.

But months of stalled negotiations over another relief bill have stoked concerns that even if the economic situation in the country worsens, legislators still won’t be able to compromise to allocate additional aid even if lawmakers from both parties call for legislative action.

“President Trump in October tweeted out ‘Go big or home’ to Congress,” Sen. Chris Van Hollen, D-Md., said. “We do need to get this done. We cannot go home before the end of December without addressing the urgent needs and the pain that American households and small businesses are facing.”

But Mnuchin said he had conferred with top Republicans on the Hill and the president, and they remained in favor of a targeted relief measures, while Democrats have pushed for a broader spending package with a higher price tag. A bipartisan group of lawmakers also unveiled a proposal Tuesday.

Powell testified that now is not the time for frugality.

“I think the risk of overdoing it is less than the risk of underdoing it,” Powell said. “That is the record of pandemics and crises. You always think — people are worried about doing too much, and you look back in hindsight and say, we might have done a little more and done it a little sooner.”

Donald Trump received subpoena in spring for documents not turned over to investigators: Sources

John Bolton was the target of Iranian murder plot in ‘likely’ retaliation for general’s death: Prosecutors