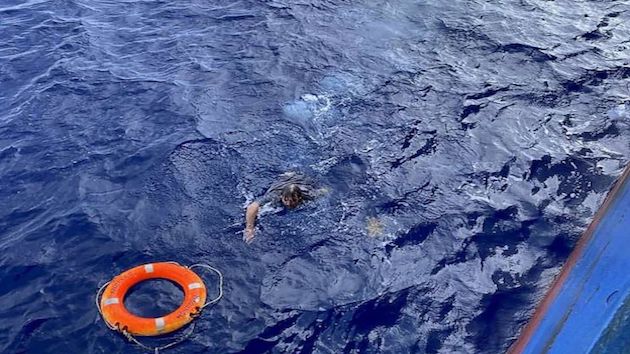 (MIAMI) — The man who was rescued 86 miles off the coast of Florida after his boat capsized didn’t think he would make it back to shore alive, the satellite call made after he was found revealed.

The search for 62-year-old Florida resident Stuart Bee began once his family alerted the U.S. Coast Guard that he failed to dock at the Port Canaveral Marina after departing Friday evening, saying he only planned to be out for a few hours, according to Coast Guard officials.

The news of Bee’s rescue Sunday morning spread after the captain of the Angeles, the 225-foot-container ship that spotted him in the Atlantic Ocean, called the Coast Guard to tell them Bee was alive and well.

“We just rescued one person from a capsizing boat at sea,” the captain of the Angeles told Coast Guard Lt. Shawn Antonelli in a satellite call, which was released by the Coast Guard on Tuesday.

“That is the gentleman we’ve been looking for,” Antonelli said after the captain gave him the man’s name. “Thank you.”

The captain replied, “I am very happy for this.”

Once Bee got on the line, he told Antonelli that he fell asleep after he’d been working on his engine, which was making squealing noises. He woke up Sunday between midnight and daybreak to water gushing into the back of his boat, Bee said.

When Bee saw the Angeles in the distance, he initially could not tell whether it was coming for him. He took off his shirt and waved it periodically, and the cargo ship took about a half-hour to get to him, he said.

Bee said he tried to swim into the middle of his boat three times to grab his personal locator beacon and was about to go down for a fourth time when he saw the Angeles.

U.S. Coast Guard Petty Officer Veronica Dunn-Depretis described Bee’s rescue to ABC News as “amazing,” adding that he is lucky to be alive.

It is unclear why Bee’s 32-foot pleasure boat named Sting Ray capsized, Dunn-Depretis said. Bee was not injured in the ordeal, she added.