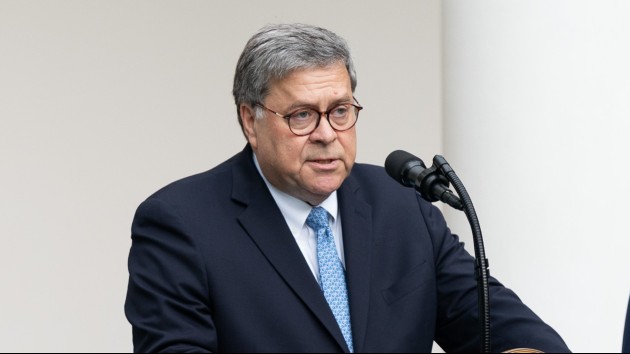 By KATHERINE FAULDERS and ALEXANDER MALLIN, ABC News(WASHINGTON) — While at the White House for meetings Tuesday, Attorney General Bill Barr had a meeting with President Donald Trump following an interview with the Associated Press in which Barr disclosed that the Department of Justice has not uncovered evidence of widespread voter fraud that would change the election results, multiple sources familiar with the matter tell ABC News.Barr spent roughly two and a half hours on White House grounds on Tuesday for what White House and Department of Justice officials previously said was a pre-planned meeting with White House Chief of Staff Mark Meadows.However, sources told ABC News that once Barr was in the building for meetings, Trump wanted to see him.One source briefed on the meeting described Barr’s interaction with the president as “intense,” but would not elaborate on any additional details about the content of their discussion.White House Press Secretary Kayleigh McEnany in a press briefing Wednesday afternoon declined to answer whether the two had spoken since Barr’s interview, and also declined to say directly whether Trump still had confidence in Barr.Soon after Barr departed the White House Tuesday, a DOJ spokesperson sent reporters a statement hitting back at what the official described as inaccurate characterizations by some in the media of Barr’s comments.”Some media outlets have incorrectly reported that the Department has concluded its investigation of election fraud and announced an affirmative finding of no fraud in the election,” the spokesperson said. “That is not what the Associated Press reported nor what the Attorney General stated. The Department will continue to receive and vigorously pursue all specific and credible allegations of fraud as expeditiously as possible.”Sources say the president has privately expressed his anger toward Barr and has even floated the possibility of removing him. Those claims were first reported by the Washington Post.The White House didn’t immediately respond to ABC News’ request for comment. A spokesperson for the Department of Justice declined to comment further.Copyright © 2020, ABC Audio. All rights reserved.