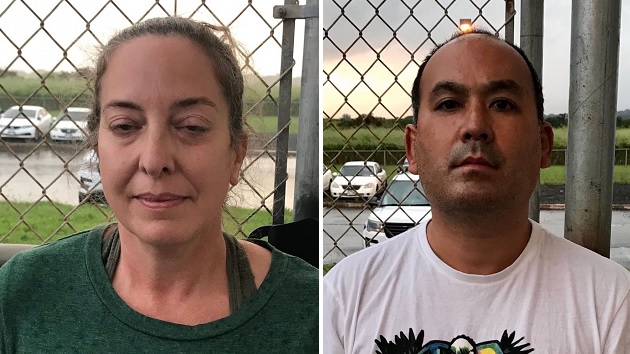 By JULIA JACOBO, ABC News(NEW YORK) — A Hawaii couple has been arrested after they boarded a flight home while allegedly knowing they had COVID-19.Wesley Moribe and Courtney Peterson were flying home to Lihue Airport in Kauai from San Francisco when it was discovered they receive a positive result in a pre-travel test for the virus, according to a statement from the Kauai Department of Health. They have been arrested and charged with second-degree reckless endangerment.Close contacts are being identified, directed to quarantine and being offered testing, the department said.The couple participated in the Safe Travels program, a mandatory travel and health form in the state of Hawaii.Hawaii Gov. David Ige approved a temporary moratorium of the Safe Travels program last Friday to return to a mandatory 14-day quarantine, which went into effect on Wednesday and applies to all incoming travelers, including mainland, inter-island residents and visitors.The state of Hawaii has seen several incidents since the start of the pandemic in which residents and visitors have tried to skirt local COVID laws, officials said.Kauai Mayor Derek Kawakami described a Florida man who tried to bypass the state’s traveler quarantine in April as a “covidiot” after the intoxicated man arrived on the island without having proof of accommodations.In May, a New York City man spent part of his vacation in an Oahu jail after he allegedly broke quarantine rules and traveled to several places using public transportation.A 20-year-old woman was arrested in Honolulu in July after she was discovered dancing in a store and dining out while she was supposed to be obeying the traveler quarantine.In August, a Hawaii teacher was also arrested for violating the traveler quarantine after he returned to Honolulu from Florida and was spotted by an acquaintance at a post office days later.Copyright © 2020, ABC Audio. All rights reserved.