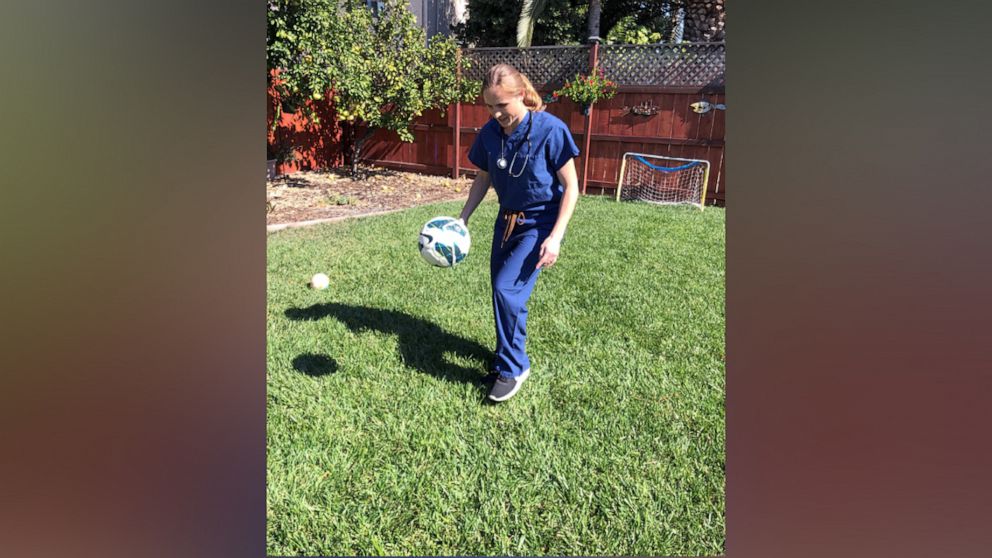 By KATIE KINDELAN, GMA(SAN DIEGO) — In 2008, Rachel Buehler Van Hollebeke — known at the time as Rachel Buehler — was representing the United States at the Summer Olympics as a member of the gold medal-winning U.S. Women’s National Team (USWNT).Over a decade later, Van Hollebeke is treating patients as a family medicine resident at a San Diego-area hospital, doing her part as a health care worker amid the coronavirus pandemic.”It’s an interesting time to be a resident and to be in medicine in general, but it makes us realize how important medical care and public health and all of those things are,” Van Hollebeke told “Good Morning America.” “I think it’s challenging but at the same time has reaffirmed my passion for medicine.”Van Hollebeke, 35, deferred her admission to medical school at the University of California-San Diego four times while she played soccer professionally and competed with the USWNT, winning two Olympic gold medals and a World Cup silver medal and competing in more than 100 international matches.She studied for the Medical College Admission Test (MCAT) while on the road for USWNT matches around the world, bringing flash cards with her everywhere and relying on some of the biggest stars in soccer to help her prepare.”Abby [Wambach] and Pearcy [Christie Pearce Rampone] would quiz me on the bus rides with my flash cards,” recalled Van Hollebeke. “Abby especially loved quizzing me.”Van Hollebeke, who received her undergraduate degree from Stanford, also kept a hand in medicine during her playing days by shadowing her team doctors, watching closely how they treated her own injuries, and volunteering at local hospitals.When Van Hollebeke retired from soccer in 2015, she started medical school the day after her last match.She graduated from UC San Diego School of Medicine in 2019 and is now working 12-hour days as a resident at Scripps Mercy Hospital in Chula Vista, California.Van Hollebeke, who is also mom to a 2-year-old daughter, said she sees lots of crossovers from her days as a soccer star to her work now as a doctor.”Medicine is all about teams,” she said, noting that one of her favorite parts of soccer was playing on a team. “Doctors don’t ever work by themselves — there’s doctors, nurses, so many different support staff and patients.””And obviously there’s work ethic that you develop as a professional athlete, as an athlete in general, working on things over and over again,” Van Hollebeke said. “I used to kick a ball against a wall with my left foot 1,000 times to try improve the way I was doing a skill.””Medicine, too, is all about building your skill set over time and practicing things over and over and learning things and just diligently chipping away at the amount of information that you’re attempting to learn and always relearning,” she added. “I really enjoy constantly trying to improve, and that’s something I loved in soccer.””You’re always learning in medicine,” she said.Dr. Marianne McKennett, the program director for Scripps Chula Vista’s family medicine residency program, said she sees Van Hollebeke, one of 25 residents in the program, as the consummate team player.”It also seems like a cliché to say that she’s a real team player, but she is. She’s the one who steps up and is willing to help out,” McKennett said. “She’s smart. She’s very positive. She has a warm nature, and she’s very humble about her accomplishments.”As a family medicine resident, Van Hollebeke — whose father, grandfather and great-grandfather were all doctors — treats patients of all ages and illnesses, a specialty she describes as covering everyone “from pediatrics to geriatrics.”She works in both hospital and clinic settings in a part of San Diego County that has been a COVID-19 hotspot, with its proximity to the border with Mexico and its high population of essential workers, according to Van Hollebeke.”It’s very prevalent in the community for sure, and it’s affected many of my patients, whether they’ve been sick or have family members who have been sick or family members have passed away,” said Van Hollebeke, who stressed that people can help stop the spread of COVID-19 by wearing face masks and following social distancing safety guidelines.”COVID has not affected different populations equally,” she said. “It’s really highlighted the racial disparities and socioeconomic disparities, and we do serve a more underserved population, primarily Latino and more working class, and it has affected our patients even more.”Copyright © 2020, ABC Audio. All rights reserved.