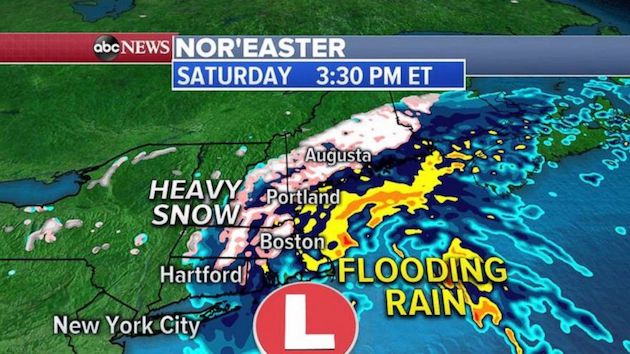 (NEW YORK) —A storm system is expected to rapidly intensify Saturday and bring heavy rain, gusty winds and snow to parts of the Northeast.

The strengthening storm system, a Nor’easter, is bringing bands of heavy rain along the I-95 corridor from Washington, D.C., to Philadelphia, to New York City and into most of Connecticut.

Up to 1 inch per hour of heavy rain was reported in parts of Maryland and Delaware Saturday morning. There has also been some flooding.

The heaviest rain is expected to pivot into some of the northeastern cities throughout the morning, and winds are expected to increase as well, gusting, at times, at over 30 mph.

As the storm strengthens and moves north and east, it should pull some colder air in from the north, and snow is expected to replace the rain in parts of New England.

Winter storm warnings and winter weather advisories have been issued for parts of the region from Connecticut to Maine.

The snow accumulation forecast is a little tricky. The atmosphere is relatively warm and will likely remain so throughout the entire event. Even though some cold air should help produce snowfall, it’s uncertain how much snow will actually fall due to the marginally cold temperatures.

Because of this, most snow will accumulate on grassy surfaces and where there is enough cold air. This could make driving very treacherous in spots, and the heavy wet snow, combined with gusty winds, could cause power outages.

In California, the Bond Fire has now reached over 7300 acres, and is 30% contained.

The peak of the latest Santa Ana wind event has passed, but winds could remain gusty through Saturday and move at up to 35 mph. Relative humidity could be as low as 5%.

Sunday will be relatively calm in terms of wind across Southern California.

Another Santa Ana wind event will arrive Monday or Tuesday. It’s unclear how low the relative humidity will be, but regardless, there will likely be a period of enhanced fire conditions.