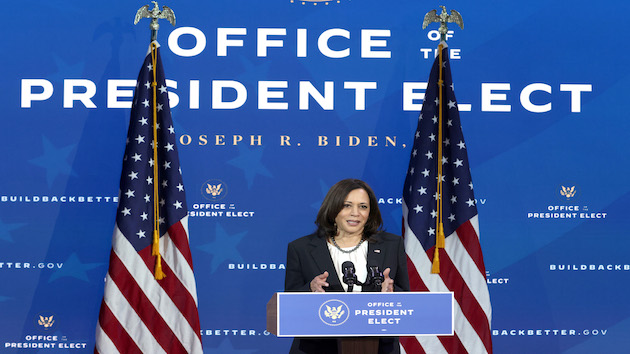 (WASHINGTON) —A record number of women and women of color are set to serve in the 117th Congress, beginning in January, due to notable gains by Republican women and despite tough losses for some House Democrats.

At least 141 women — 105 Democrats, 36 Republicans — will serve in the next Congress, breaking the record of 127 female lawmakers who served in the 116th Congress, according to Rutgers University’s Center for American Women and Politics (CAWP). For Republicans, 36 is a new high, surpassing 30 GOP women who served in 2006, while for Democrats, 105 is one short of the record set in 2019.

Notably, the new year will also see at least 51 women of color in the nation’s capital — 46 Democrats, one short of a record 47 who just served — and five Republicans, surpassing a previous high of three in 2014, per CAWP, which has been tracking female representation in Congress over history and has the most complete data.

But according to many experts, considering the ramped-up recruitment efforts and record-crushing numbers of women and women of color who ran this cycle, the gains in 2020 were relatively “small” — structural barriers, including sexism and racism, have endured.

Nadia Brown, a political science and African American studies professor at Purdue University, told ABC News that although there were some “incremental gains” in representation in 2020, compared with 2018 — which was dubbed the “year of the woman” — this cycle “was not this huge watershed moment.”

“Although we’ve seen women of color and women in electoral leadership, they are still not fully embraced,” Brown said. “My own research is that voters still assess women, particularly women of color, through these very racist and sexist tropes,” she added, pointing to sexist and racist attacks by members of Donald Trump’s campaign and some lawmakers targeting Vice President-elect Kamala Harris throughout the 2020 presidential race.

Underrepresentation and a partisan gap

Women, who make up about 51% of the U.S. population, will make up about 26% of Congress — most seats still are held by white men.

While Democratic women in the House are approaching parity with male colleagues in their party, including a notable number of Black women, a much larger disparity remains among Republicans — especially with women of color.

According to Kira Sanbonmatsu, a professor of political science at Rutgers University and a senior scholar at CAWP, while all women face structural barriers, Republican women are experiencing two unique challenges: less diversity among party members and a disparity in structural support for women and women of color compared to Democratic women.

“The Republican Party has more work to do than the Democratic Party,” Sanbonmatsu said. “While we do know that a record number of Republican women were elected this year to the U.S. House, they are underrepresented if you consider how many Republican women are in the country as a whole. Now, part of the challenge on the Republican side is that Trump’s messages around race and gender make it harder to recruit and gain support for diverse candidates.”

According to a June 2020 Pew Research report, 56% of female registered voters identify with or lean toward the Democratic Party, compared with 42% of men.

The report also finds that the GOP “continues to maintain an advantage in leaned party identification among white voters,” 53% to 42%, while “sizable majorities of Black, Hispanic and Asian American voters identify with or lean toward the Democratic Party.”

Most GOP women of color who ran for congressional seats lost this year, in part because some, including Kim Klacik in Maryland and Laverne Gore in Ohio, ran in Democratic strongholds.

Former Republican Virginia Rep. Barbara Comstock, an ABC News contributor, cited the importance of candidates garnering support from local elections and building a support base before running for statewide or national seats.

“A lot of our successful candidates had previously run … on the state level and local level,” she said. “We are looking to get more diversity there too. [Our teams] are still going through and identifying that, but that’s been a priority.”

Andra Gillespie, a political science professor at Emory University who specializes in race and politics, said that although gains in representation were “small” in 2020, the progress seen demonstrates that a focus on getting more women into the political pipeline has been effective.

“Women don’t get encouraged to run for office at the same rate as men do, even when they’re qualified,” Gillespie said. “Part of the reason why you’re seeing more women of color running for political office is that there are targeted recruitment efforts.”

Emily’s List, a political action committee founded with the mission of helping pro-choice Democratic women get elected to office, currently is the largest resource for women in politics and is part of an expansive network of Democratic organizations working to help women get elected.

Christina Reynolds, vice president of communications at Emily’s List, told ABC News that in 2020 more than 700 candidates at the state and local levels were supported by the organization through recruitment, endorsements and financial help.

“Congress is roughly 75% men, and a lot of those are white men, and that’s not great … that’s certainly not representative of this country,” Reynolds said. “As Ayanna Pressley says, ‘The people closest to the pain should be closest to the power.’ Our government works better when it looks more like the people who it represents.”

Reynolds said that when women are in office, issues concerning women, especially minority women, are more likely to be addressed: “For example, last cycle Lauren Underwood and Pamela Harris, and several others, were very vocal on the issue of Black maternal deaths in this country, which are just really high.”

Over the past three decades, the Democratic Party has built an expansive, powerful and well-funded network of organizations to support female candidates up and down the ballot as early as the primaries, which, according to some experts, is largely why more women of color in Congress are Democrats.

After devastating losses in 2018, Republicans ramped up recruitment efforts of women, and there’s been an uptick in groups working to recruit, support and elect conservative women.

Winning for Women, founded in 2017 and often referred to as W4W, supported female Republican candidates by pouring nearly $3 million into their campaigns during the last cycle.

The Winning for Women Action Fund was founded in 2019 — a GOP Super PAC that ran successful, six-figure television campaigns in 2020. The action fund supported GOP women candidates in Iowa, Minnesota and Oklahoma, according to Olivia Perez-Cubas, a spokeswoman.

“We really got some high-quality candidates who were running a tough, tough year,” said Comstock, who serves on the W4W board. GOP candidates who won in 2020 are “a real credit, number one, to [them] being great candidates, but also the value of getting early support, which these groups provided.”

The Democratic Party has “done a much better job of recognizing the need to cultivate pipelines,” in part because the party now recognizes the structural barriers that women and women of color face, Brown said. “The Republican Party is much more individual-centered. The idea is that the cream will rise to the top.”

Sanbonmatsu said that part of the challenge is “gatekeepers not recognizing the appeal and viability of women of color” in the recruitment process, adding that they “need to think more broadly about who can serve and be successful.”

Women who run for Congress “are often dismissed” and not seen as credible candidates compared with men, Reynolds said, adding that this attitude is particularly evident for women of color.

That said, Reynolds continued, even now for women of color “what we’ve seen for the last few years is that anybody can raise money if they if they’re willing to work at it and learn how to do it right.”

Working with partner organizations like Higher Heights and the Latino Victory Project, Emily’s List’s goal is to build a “diverse pipeline,” Reynolds said, so women, particularly of color, are seen as viable options when a seat opens up.

Comstock said that W4W is “working hard to recruit” more and more diverse women to run.

“Republicans,” Comstock added, “are not going to be in the majority until we, you know, look more like the country and are more diverse and have more women.”