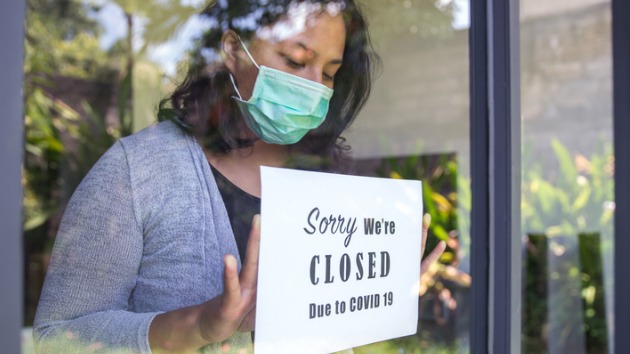 By KELLY MCCARTHY, GMA(NEW YORK) — The restaurant industry has permanently lost more than 110,000 eateries and drinking establishments in the over 200 days since the pandemic first brought operations to a halt.According to a new survey from the National Restaurant Association, as of Dec. 2, 17% of establishments in the industry have either closed permanently or had long-term closures.”What these findings make clear is that more than 500,000 restaurants of every business type — franchise, chain, and independent — are in an economic free fall,” said Sean Kennedy, executive vice president for Public Affairs, in a letter sent to congressional leadership on Monday. “And for every month that passes without a solution from Congress, thousands more restaurants will close their doors for good.”As documented in the survey, the vast majority of restaurants that have permanently closed were well-established businesses and fixtures in their respective communities for an average of 16 years.Before closing for good, those restaurants employed an average of 32 people, and 17% employed at least 50 people.The hard-hit industry is full of long-time entrepreneurs, and despite being the second-largest private employer in the nation, calls from restaurant leaders for a stimulus relief plan have come up short.Restaurant owners have become more like contortionists in the last nine months, changing operation structures and safety protocols, bending every which way all in an effort to stay in business.The letter included the full survey findings to illustrate the deterioration of the restaurant industry and in hopes of gaining support for a proposal and a larger relief package in 2021.”In short, the restaurant industry simply cannot wait for relief any longer,” Kennedy added. “We appreciate the efforts of a group of moderate members of the House and Senate to advance a true compromise between the competing proposals from Democratic and Republican leaders. If this moderate plan represents a ‘down payment’ for a larger relief package in early 2021, it will provide restaurants with immediate relief to hold on through the most dangerous point in our business year.”The association compiled a full Blueprint for Restaurant Revival that includes the long-term recovery needs of the industry.Additionally, the Independent Restaurant Coalition (IRC) sent a letter to Congress Monday demanding passage of the RESTAURANTS Act, a bipartisan proposal that would establish a $120 billion Restaurant Revitalization Fund for struggling neighborhood establishments. That letter emphasized why the Paycheck Protection Program is not the best solution for restaurants, warning Congress that without direct federal aid, “many [employees] will likely never return to work.”The stark news for the industry comes on the heels of November’s employment report that showed food and drinking places lost 17,400 jobs last month and are still down over 2.1 million jobs since the start of the pandemic, more than any other industry.Unemployment in Leisure and Hospitality is 134% higher than the national average, according to the report.Additional Findings by the NumbersThe National Restaurant Association Research Group conducted the survey of 6,000 restaurant operators and 250 supply chain businesses Nov. 17 to 30, 2020 and the findings were stark.- 87% percent of full-service restaurants (independent, chain, and franchise) reported an average 36% drop in sales revenue.- 83% of full-service operators expect sales to be even worse over the next three months.- 72% of owners of permanently-closed restaurants say it’s unlikely they will open another restaurant concept in the months or years ahead.- 59% of operators say their total labor costs — as a percentage of sales — are higher than they were pre-pandemic.- 58% of chain and independent fullservice operators expect continued furloughs and layoffs for at least the next three months.- 49% of operators say their restaurant currently offers on-premises outdoor dining in a space such as a patio, deck or sidewalk; that number is down from 67% in September.Copyright © 2020, ABC Audio. All rights reserved.