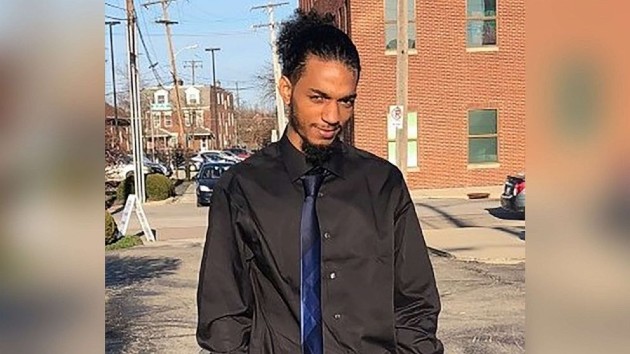 By HALEY YAMADA, ABC News(COLUMBUS, Ohio) — The family of Casey Goodson Jr. is calling for justice after the 23-year-old was shot dead while entering his home on Dec. 4 in Columbus, Ohio.Goodson was fatally shot by Franklin County Sheriff’s Office deputy Jason Meade, but the details of what led up to the shooting differ between the authorities and Goodson’s family. Meade, who had been taking part in an unsuccessful search for a fugitive along with the U.S. Marshal’s Office, said Goodson — who was not the target of the search — waived a gun at him when he drove by his police car. Meade confronted Goodson outside his home and he refused to drop his gun, U.S. Marshal Peter Tobin said at a press conference last Friday.But Goodson’s family said he was returning from a dentist appointment and had a Subway sandwich in his hand, according to family co-counsel Sean L. Walton.”Casey had the screen door open and his keys in the door and Deputy Jason Meade fired shots at Casey,” Walton told ABC News Prime Tuesday. “He fell into the house, where he lay in his kitchen.”Goodson’s mother, Tamala Payne, told ABC News Prime that she was at work when she heard her son had been shot.”[Meade] took an oath to serve and protect and clearly that’s not what he does. … Therefore, I want justice for my son,” Payne told ABC News.”My 5-year-old called me, crying and screaming, ‘Mommy, Casey just got shot,"” said Payne, who added that the child witnessed Goodson’s death.Police said a gun was found at the scene, but Goodson’s family said he was a legal gun owner.According to a statement released by the Columbus Police Department, many facts about the incident will remain unknown until the investigation is completed. The Columbus Police Department is investigating the shooting, since the sheriff’s office does not look into fatal shootings by its own deputies.There is no police video of the shooting, since Franklin County Sheriff’s task force officers are not issued body cameras.Meade is a 17-year veteran of the sheriff’s office, but had been permanently assigned to work with the U.S. Marshal’s Office, according to Columbus ABC affiliate WSYX-TV.”What I believe in my heart happened is that Casey was murdered in cold blood for being a Black man,” said Payne. “[The deputy] deserves to be in jail. He deserves to prosecuted to the fullest extent of the law.””The deputy sheriff’s office and whoever else is involved needs to take proper steps in ensuring that their deputies are trained properly,” she added.Ohio Sen. Sherrod Brown tweeted on Monday that Goodson was “yet another young Black man who should be alive today” and called for a full investigation into his death.”We stand with Sen. Brown in saying that this is unfortunately another Black life lost, but it has to stop,” Walton told ABC News Live. “Casey enjoyed exercising his right to carry a gun, and we are not sure what happened that day, but no allegations of wrongdoing have been made. Casey was a law-abiding citizen.”On Tuesday, U.S. Attorney David M. DeVilliers announced that the U.S. attorney’s office and FBI will review Goodson’s death.The Civil Rights Division of the Department of Justice, the Cincinnati division of the FBI and the Columbus Police Department will review whether any federal civil rights laws were violated, according to a statement.DeVilliers said the federal authorities will “take appropriate action if the evidence indicates any federal civil rights laws were violated.””The family is demanding an immediate answer as to what happened that caused the deputy to choose to take Casey’s life,” said Walton.Payne said that she will continue to be her son’s voice throughout the process.”My son, as I’ve stated a thousand times, was an amazing little boy. And he was still a little boy because he is always going to be my baby,” said Payne. “Just knowing that Jason Meade took his voice, he no longer has one. Therefore, I am his voice and I know that I have to be his voice. … I have to stand up for my son because, if I don’t, no one else will.”